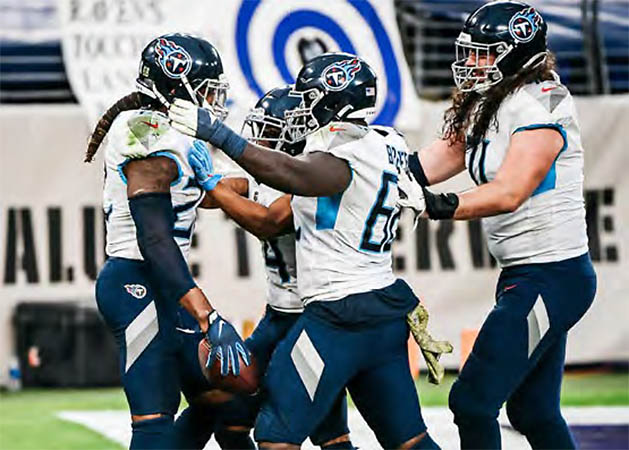 Nashville, TN – The Tennessee Titans and Indianapolis Colts have played 53 all-time games, including playoffs. The Colts lead the series 35-18. They have split the series in each of the past two seasons.

In 2020, the Titans and Colts played two games in a three-week span. In the first meeting on November 12th, a nationally-televised Thursday night game in Tennessee, the Colts scored 24 consecutive points and took advantage of Titans special teams miscues to secure a 34-17 victory. The Titans had a punt for 17 yards, a punt blocked and a missed field goal contribute to the defeat.

Jacoby Brissett completes the game-winning four-yard touchdown pass to T.Y. Hilton with 4:38 on the clock in the fourth quarter. The Colts convert 50 percent on third down (7-14) and limit the Titans to 10 percent (1-10).

The Titans erase a 10-point deficit in the second half, taking the lead with 5:02 remaining in the fourth quarter on Tye Smith’s 63-yard touchdown return after Dane Cruikshank blocks a 46-yard field goal attempt by Adam Vinatieri. The Titans block two total field goals (Austin Johnson).

The Colts score the game’s final 24 points to defeat the Titans on Thursday Night Football. The Titans’ second half includes three consecutive possessions ending with a 17-yard punt, a blocked punt by the Colts for a touchdown, and a missed field goal, leading directly to 21 total points for the Colts.

In a battle between 7-3 teams, the Titans win to take the lead in the AFC South. Derrick Henry totals 178 yards on 27 rushing attempts and in the first half alone accounts for 140 rushing yards and three touchdowns.


The Titans scored touchdowns on five of their six possessions in the first half. After the Colts tie the score at 14-14 in the second quarter, the Titans score the next 24 points. A.J. Brown (98 receiving yards) scores on a 69-yard catch-and-run in the first quarter and adds a 42-yard touchdown return of an onside kickoff attempt by the Colts in the fourth quarter. The Titans total 449 yards, including 229 rushing yards