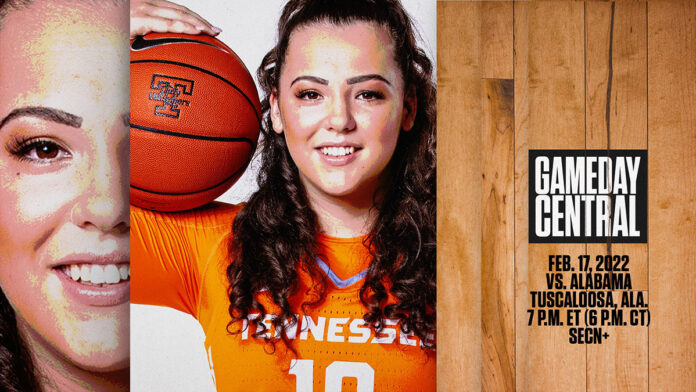 The Lady Vols and Crimson Tide will meet for the second time this season and for the 60th occasion since the series began on January 22nd, 1977, with UT looking to improve its record to 53-7 all-time vs. Bama.

Kellie Harper‘s squad opened SEC play back on December 30th in Knoxville with a 62-44 victory over the Tide during the middle of a nine-game win streak.

The Big Orange women have now won eight straight at home, including their last two contests, but they look to snap a three-game road losing streak after stumbling at Auburn, Florida, and UConn over the past two weeks.

The Tennessee Lady Vols come to Alabama after posting back-to-back home wins last week over Missouri and Vanderbilt by scores of 76-62 and 66-52, respectively

Bama, meanwhile, has dropped three of its last four and eight of its last 10. Kentucky managed to defend its home court on Sunday, holding off the Crimson Tide, 67-63, in Lexington.

The trip to Tuscaloosa marks the first of two road games this week, marking the final two contests of the regular season that will be played away from Thompson-Boling Arena.

Roger Hoover (play-by-play), Richard Hendrix (analyst), and Kennedy Chase (reporter) will have the call for the SECN+ live stream broadcast.

The contest also can be heard on Lady Vol Network radio stations and by audio stream, with Mickey Dearstone behind the microphone. He will be joined by studio host Bobby Rader.

The Lady Vols were picked second in the 2021-22 SEC Preseason Media Poll and No. 3 in the SEC Preseason Coaches Poll, marking their best positions since 2015-16 and 2016-17, respectively.

Lots Of Connections In This One

This year’s Tennessee squad features three players who hail from Alabama, two coaches who spent their childhood in the state, two more coaches who worked at a university there and a support staff member who worked at that same university at a different time. Alabama features a former UT staffer on its payroll.

Dye and Bama’s Brittany Davis were teammates at Gulf Coast State College in 2018-19 and helped the school to a JUCO national title.

UT assistant Samantha Williams was born in Luverne, AL, before later moving to Louisville, Ky., while Joy McCorvey is from Brewton, Ala., and graduated from T.R. Miller High School.

Head coach Kellie Harper spent two years from 1999-2001 on Joe Ciampi’s staff at Auburn (admin. asst., then assistant coach), while Jon Harper graduated from Auburn and spent three seasons as a practice player, manager, and intern for Ciampi from 1996-99.

Samantha Williams played for the Tigers during Jon Harper‘s time there.

Lady Vol strength and conditioning coach Bryan Tatum worked with the Auburn football program in the same capacity from 2014-21.

Alabama director of operations Brian Johnson is in his sixth season with the Tide and spent four seasons on Holly Warlick’s Lady Vol staff as a manager, graduating from UT in 2016.

UT began that 2015-16 season at No. 4 in each poll and stayed there for two more weeks in the AP Top 25 but was relegated to No. 5 in the coaches poll the following two polling periods.

Tennessee has dealt with more than its fair share of injuries in 2021-22. While the Lady Vols were able to overcome some of their misfortunes, they are in the process of trying to move past another setback.

The latest injury occurred on January 23rd at Georgia, when reserve forward/center and team leader Keyen Green (7.0 ppg., 3.2 rpg.) was lost for the year due to a knee injury.

While UT was able to hold on and defeat the Bulldogs in that game, they subsequently dropped three out of their next four games by substantial margins, revealing just how vital Green was to the team. UT was able to finally get back on the winning track vs. Missouri and Vanderbilt and hopes to continue that positive momentum vs. Alabama.

Marta Suárez, a 6-2 guard/forward (4.1 ppg., 3.6 rpg.), another glue-type player for this program, already was sitting out the year due to an injury, so Green’s loss even more severely affected Tennessee’s depth.

UT’s top returnee, preseason All-SEC pick Rae Burrell, suffered a knee injury in game one and missed 12 games before gradually working her way back into the lineup. Her 10.6 ppg., 3.0 rpg. stat line is shy of last season’s 16.8 ppg., 4.6 rpg. productivity, but she is showing signs of upward mobility.

All of that said, the Lady Vols still stand at 21-4 overall and 10-2 in SEC play as they prepare to close out the regular season with their final four contests.

Horston, who has made the top 10 list for the Ann Meyers Drysdale Award and watch lists for the Naismith Trophy and Wooden Award, leads the Lady Vols with 12 double-doubles and has topped UT in scoring 15 times. She has seven games of 20 or more points, including four of the past six contests.

Senior All-SEC First Team preseason pick Rae Burrell (10.6 ppg., 3.0 rpg.) has seen action the past 12 games after missing the previous 12 contests due to a leg injury suffered in the opener vs. Southern Illinois. She has hit double figures in seven of the past nine games, hitting 10+ for the first time since Nov. 10 with 11 at Vanderbilt on Jan. 13 and carding a season-high 21 vs. Arkansas on Jan. 31. Over her last five games, Burrell is producing 13.4 ppg. and 3.8 rpg. while hitting 94.4 percent on free throws.

Alexus Dye, a 6-0 forward, is fourth among UT players in scoring at 9.0 ppg. She is third in rebounding at 7.1 rpg and has three double-doubles, including a 13/10 effort vs. Arkansas most recently. The graduate transfer from Troy, who is among the Katrina McClain Award Top 10, has scored in double figures 11 times, including an 11-point effort vs. Missouri.

Graduate guard Jordan Walker, who had 17 points vs. Auburn, is Tennessee’s fifth-highest scorer, putting up 7.6 ppg., while tallying 3.9 rpg. and 3.0 apg. to rank fourth and second for UT in those categories. Walker is tied for third on the team with Tamari Key at 9.3 ppg. in SEC games and grabs 4.2 rpg.

Freshman guard/forward Sara Puckett is UT’s sixth-leading scorer. The No. 43 espnW prospect coming out of high school is putting up 7.2 ppg. and is shooting 47.7 percent from the field, 33.9 percent on threes, and 76.2 percent on free throws and has scored in double figures six times, including a critical 10-point, 10-rebound double-double in the win over Arkansas on January 31st.

Darby has turned the ball over only four times in eight road games this season.

Tennessee hasn’t been a great shooting team on the road, but it still hits at a higher percentage from the field than opponents, 39.5 to 35.5 percent.

The Lady Vols have nearly a double-digit rebound margin on the road, pulling down 44.6 per contest to their opponents’ 34.9 (+9.7).

Tamari Key has hit 56.3 percent from the field, and Sara Puckett has made 52.1 percent of her makes in UT’s road games.

Kellie Harper‘s squad holds down second place in the SEC standings, trailing No. 1/1 South Carolina (11-1) by a game at 10-2 and possessing a one-game lead over Florida and LSU (both 9-3 in league play).

The Lady Vols have limited SEC foes to shooting only 23.9 percent (1st) from the three-point arc, including games vs. noted three-ball teams Arkansas (twice), Texas A&M, Missouri, and Florida.

UT has worked to elevate its free-throw shooting. It shot 59.2 vs. non-conference foes and has raised it to 67.9 percent in 12 SEC games to rank ninth.

Horston is the third-leading rebounder in league play, is number six in assists per game, and No. 10 in scoring.

Key is shooting 57.1 percent from the floor vs. SEC foes and has blocked 44 shots already for a 3.7 blocks per game average to lead the SEC.


Jordan Walker (80.0) and Alexus Dye (76.9) have been much improved at the charity stripe during league play.

UT is 9-0 in SEC games this season in which it holds opponents to 70 points or fewer.

Guard Jordan Horston was stellar for the Lady Vols in the win, scoring 16 points, pulling down 13 boards and dishing out seven assists in her second-straight game with a double-double and her 12th on the season. The junior also swatted away two shots.

Tennessee (21-4, 10-2 SEC), which retained sole possession of second place in the league standings, now is 16-0 this season when holding opponents under 60 points and 20-0 when limiting them to 70 or fewer. The Big Orange dominated on the glass all day long, out-rebounding the Commodores, 48-29, and posting their 19th double-digit margin on the boards in 25 contests.

UT also got a jolt from its bench, which posted 26 points to VU’s seven and used its height advantage to double up Vandy on points in the paint, 32-16.

Horston recorded her 12th double-double of the season against Vanderbilt to tie Glory Johnson’s total as a junior. Only five Lady Vol juniors have ever recorded more in a single season.

Mercedes Russell holds the record with 19, Isabelle Harrison is second with 18, Chamique Holdsclaw is third with 16, Candace Parker is fourth with 14, and Daedra Charles is fifth with 13.

Tennessee out-rebounded the Commodores 48-29. UT has out-worked 22 of 25 opponents on the glass this season and is 21-1 in games in which it wins the battle of the boards.

Senior Rae Burrell turned in 15 points against Vandy, moving her career points total to 999. She’ll look to become the 47th Lady Vol to surpass the 1K mark on Thursday against Alabama.

Junior Tamari Key doled out a career-high five assists against Vanderbilt on Sunday, upping her career-high for the second time in SEC play this season. Her previous high was three assists set against Alabama on December 30th.

After the Tide halted a 42-game UT winning streak by claiming five straight from 2016 to 2019, Tennessee has struck back by winning three straight meetings under Kellie Harper.

Against the Crimson Tide, the Lady Vols are 24-1 in games played in Knoxville, 19-3 in Tuscaloosa, and 9-3 at neutral sites.

After Alabama held Tennessee to 65 points or fewer in six straight meetings, the Lady Vols exploded for 82 in Tuscaloosa last season.


About The Alabama Crimson Tide

The Crimson Tide squad has three players with 30 or more three-pointers made, including Davis (54), Hannah Barber (48), and Abrams (30).

Bama has three SEC games it has dropped by four or fewer points, including its latest setback on Sunday to Kentucky, 67-63, and previous losses to Georgia and Mississippi State.

Megan Abrams led UA in scoring for the ninth time this season, recording 21 points on 7-of-17 shooting from the field and connecting on all six of her attempts at the free-throw line.

JaMya Mingo-Young had the fourth double-double of her career, scoring 16 points, while Brittany Davis tacked on 12.


When UT And UA Last Met

Graduate guard Jordan Walker led UT (12-1, 1-0 SEC) in scoring with 16 points, while junior center Tamari Key turned in a double-double with 13 points and 11 rebounds. Their efforts helped head coach Kellie Harper pick up win No. 50 during her third season at UT.

Brittany Davis was the high scorer for Alabama (9-3, 0-1 SEC) with 12 points, and JaMya Mingo-Young was close behind with 11.

The Tennessee women’s basketball team is back on the road on Sunday, as it faces a 12:00pm CT matinee on ABC at No. 1/1 South Carolina.

ESPN College GameDay will be live in Columbia from Colonial Life Arena from 11:00am to 12:00pm CT.