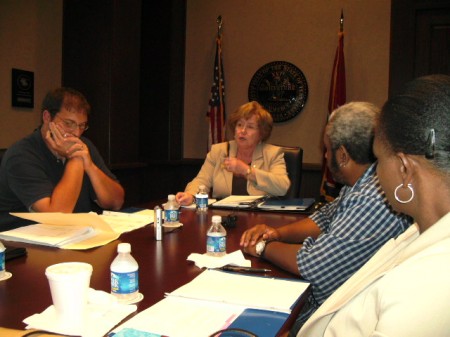 Mayor Bowers expressed appreciation for the group meeting with the committee to give input of citizens concerns with the redevelopment initiative underway.“Listening to Montgomery County citizens is the purpose of county government,” said County Mayor Bowers.

A priority for the county is protecting the county tax revenue base. Any TIF (tax incentive financing) funding loss will have to be offset by some form of tax revenue replacement for the county’s tax coffers. Commissioners also expressed concerns about insuring due process and fairness. Accountability of those carrying out this plan and protection of the rights of property owners are all valid concerns that must be addressed.

The group was assured that the county has not signed on to be partnered with the city in this plan. It has heard from other interests, the city, the Downtown District Partnership, business owners, historic district home and property owners. This meeting allows the committee to gain input from the minority community directly. 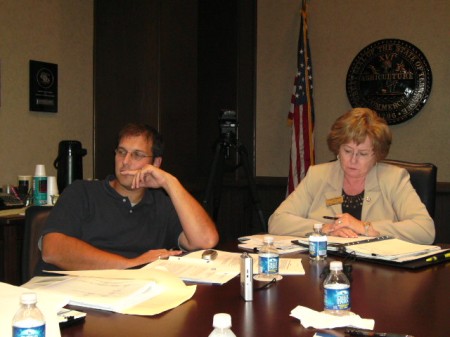 The group provided the committee members with documentation of complaints filed with city government, federal officials at HUD and the Dept. of Justice, as well as the State Conference and national offices of the NAACP. Additionally, they were given copies of the original Knoxville Redevelopment Plan, The Lonsdale Redevelopment/Renewal Plan of 2005, developed by the Knoxville Community Development Corporation, KCDC. That plan supposedly is the model for Clarksville’s plan.

The Knoxville plan was developed from a HUD approved template model. Turner McCullough pointed to significant differences between the two plans which seriously undermine protections of elements that help provide a ‘sense of community’ to any area, such as historic homes or businesses, religious structures, protected voting precincts or wards, and long established common community gathering places. These elements are clearly highlighted and included in all Knoxville redevelopment plans. These elements and their protection are absent in the Clarksville plan. The actual creation of the plan itself was also a subject of consideration. Citizen involvement practices between the two plans also differs greatly.

Jimmie Garland informed the group of federal complaints filed through the NAACP questioning the fairness of the city’s actions. Prominent of these is the fact that the redevelopment ordinance is not an actual plan of action. The city has repeatedly told the citizenry that there is no plan as yet. This differs directly from the Knoxville plan model. Also important is the fact that the ordinance’s impact seems set to demolish or eliminate the city’s only majority minority ward. That is a major concern of the Department of Justice Office of Civil Rights. The Voting Rights of 1965 specifies that certain protections must be employed in any redevelopment plan or urban renewal programs that could have a negative impact on existing majority minority wards. The city has not recognized its obligations under these protections.

Another aspect of the initiative which was discussed was the widely held fear of the potential for the abuse of eminent domain in the city’s initiative. Currently, the city’s ordinance does not conform with the TCA’s provisions for restrictive application of eminent domain as well as provisions of HUD guidelines in providing rehabilitation assistance to affected homeowners in communities targeted by redevelopment plans funded with, impacted by or through HUD funding. This usually means communities that receive Community Development Block Grant (CDBG) or SSBG (Social Services Block Grant) program funding, such as the city of Clarksville.

Candy Johnson addressed the unease and concerns of residents of the Brandon Hills and Red River District about the impact the redevelopment ordinance will have on their communities. Many of Clarksville’s elderly minority homeowners reside in these communities. She spoke on behalf of her own grandmother who resides in the targeted Red River District community. These elderly citizen homeowners and taxpayers have struggled all their lives to acquire and maintain homes and provide for their families. Now they are social security recipients, or retirees seeking to enjoy their golden years with piece of mind and their grandchildren. Instead, they find themselves faced with the threat of the city’s condemnation powers being applied against them in an arbitrary manner to benefit private development. Johnson relayed reports of instances of elderly home and property owners being badgered by insistent and intimidating private developers trying to coerce home/property sales with the threat of having the city condemn the property via eminent domain where the homeowners would receive next to nothing in payment for their properties. The city would then give the property to the developer for their private enterprise development. Efforts to access federal assistance for homeowners rehabilitation or renovation programs under the CDBG program have been denied. They have been told those funds are unavailable, having been reserved for some other pending projects. Commercial home improvement loans at local banks have also been denied.

Provisions which gave citizens a measure of protection and a guarantee of fair play that had been incorporated into the ordinance were stripped out before the city council’s final vote to approve the current ordinance. The power of assemblage, disregard for historic district properties, unilateral application of eminent domain in the furtherance of private enterprise development, denial of provisions for the protection of the majority minority ward, denial of private homeowners rehabilitation/renovation federal assistance and poor sharing of information were all elements discussed with the committee.

The committee members thanked the citizens for their activism, information and willingness to engage their government. The information shared will be become part of their background packet from which they will formulate the county’s position and report back to the full commission. Citizens are encouraged to contact their representatives and ask about the progress of this developing project. The county mayor’s office welcome citizen inquiries about government.