Nashville, TN – Hard on the heels of the flood waters that swamped Middle Tennessee just over a year ago, heavy rains again saturate a large portion of the state. Due to above normal water levels and the high potential for flooding, the Tennessee Highway Patrol is urging all motorists to avoid standing water on roadways…“Turn Around Don’t Drown®.”

According to the National Weather Service (NWS), annually, more deaths are caused by flooding than any other severe weather-related hazard. Preliminary data from NWS indicate there were 22 flood casualties in Tennessee in 2010. Of those 22 deaths, eight of those were by vehicle. 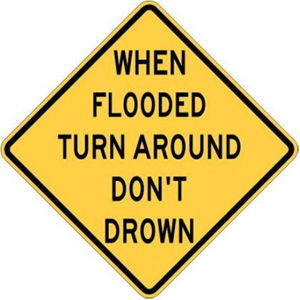 “Motorists must be smart and take extra precautions when driving in wet, rainy, and flooding conditions,” said THP Colonel Tracy Trott. “Drivers should adjust their speed accordingly, and avoid driving through flooded areas by any means necessary.”

In Tennessee, it is against the law to drive around a barricade or flood warning sign. According to TCA 55-10-205 (c)(1), any driver who knowingly ignores a clearly visible and adequate flood warning sign or blockade and drives into a road area that is actually flooded is committing reckless driving. In addition to fines, the court may order the driver to pay restitution for the cost associated with any rescue efforts related to the violation.

Flash floods can come rapidly and can occur within a few minutes of excessive rainfall. However, most flood-related deaths and injuries could be avoided.

THP offers these reminders to drivers:

The Centers for Disease Control report that the most common cause of flood-related deaths is drowning in the United States. More than half of flood-related drowning occurs when a vehicle is driven into hazardous flood waters. In the United States, flash and river floods claimed 56 lives in 2009, down from 82 in 2008. Of the 56 deaths, 33 (59 percent) were caught in a vehicle other than a boat, 10 (18 percent) were swept away by flood waters, and 11 (20 percent) died of unidentified causes. (Source NOAA)

Since 1996, over 400,000 crashes have occurred in Tennessee in the rain. Drivers who may need assistance while traveling in Tennessee can dial *THP (*847) from their cell phone and will be automatically connected to the nearest THP communications dispatch office.

The Tennessee Department of Safety’s (www.TN.Gov/Safety) mission is to ensure the safety and general welfare of the public.  The department encompasses the Tennessee Highway Patrol, Office of Homeland Security and Driver License Services. General areas of responsibility include law enforcement, safety education, motorist services and terrorism prevention.