Fort Campbell Sgt. Joe Padula says ‘To tell the Soldier’s story, you must fight by their side’

Fort Campbell, KY – Staff Sgt. James P. Hunter was posthumously awarded the Kentucky Medal of Freedom, May 28th. His Family accepted the honor during a ceremony held in Lexington, KY.

In April of 2009, I, then Pfc. Joe Padula, was introduced to a young, strong man of about 24 years old. He stood tall in a stance, built with confidence. He wore a combat patch on his right sleeve. I could tell this man has been tested before, and I was a lost Soldier at Fort Campbell who had just found Staff Sgt. James P. Hunter — thank God.

Hunter was the combat correspondent for the Strike Brigade, the 101st Airborne Division’s 2nd Brigade Combat Team, one of the most decorated and deployed units in the Army. His job there was to tell the Strike Soldier’s story, and he did so like no other before him. Through his writing, pictures, videos, radio broadcasts, social and global media, Hunter took the Army Public Affairs standard to the next level. 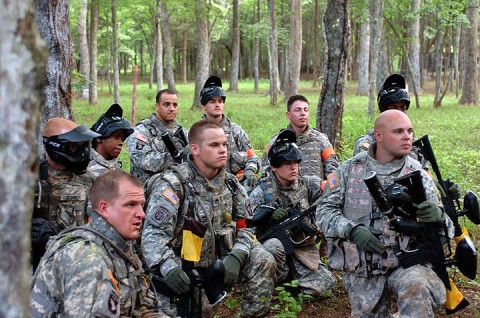 As soon as I met him, I knew he was a leader. I know it’s overused and over said, but in all reality, this man set his Soldier up for success from day one. He first ensured all of my paperwork was in order. He secured a barracks roof over my head. He checked the meal card for his new private first class. He inspected my gear and uniform to make sure it met the Strike standard.

And after all of that, he pulled me to the side and told me eye-to-eye his personal creed: “To tell the Soldier’s story, you must fight by their side.” And that is how we always trained, at the side of the Strike Soldier. Wherever the Infantrymen went, we went. Wherever the engineers went, we went. Everyone in the brigade got their story told without fail, and it was because of his leadership. 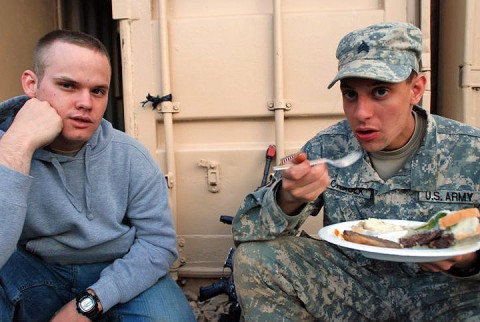 In May 2010, Col. Arthur Kandarian and his Strike Brigade deployed to defeat the insurgency in Kandahar, Afghanistan. The birthplace of the Taliban, it was the newest “front line” in the War on Terror. Kandarian once said during the mission, “They picked the right team to go into the right fight during the right time.”

Kinetics and gunfights were heavy from the start, and the Strike Soldiers immediately faced a Taliban insurgency who used suicide bombers, foreign weapons, recoilless rifles and those damn IEDs. Those IEDs were everywhere and made with everything. Almost every step I took, I wondered if it were to be my last one, but this did not stop us.

Just as Hunter taught us, we told the Soldier’s story by fighting by their side and because of it, the media respected our work, the Soldiers accepted us, and perhaps most importantly, the Families were informed about their loved ones.

However, while on dismounted patrol with a Strike Infantry unit in a Taliban-infested area, June 18th, 2010, a remote-controlled IED detonated. Staff Sgt. James P. Hunter, a Kentucky native, was killed in action while doing what he loved to do: telling the Soldier’s story.

I don’t want to talk about the emotions, the countless emotions that took over that day, but with a sad, yet proud, thick New York accent, I provided the following remarks at his memorial service held in a Kandahar base, June 21st, 2010. 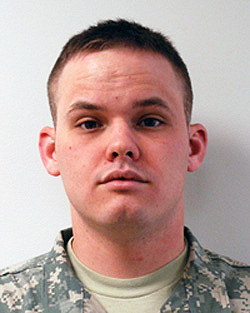 “Where do you start, when you talk about Staff Sergeant James Hunter? I mean, this man at the age of 25 had done so much, more than most twice his age. Right from the start of his Army career, the man excelled. At his basic training, where he was promoted. Then at his AIT, where he learned how to be a photojournalist, was put in charge of his peers as their platoon guide. The man was a born leader. He first went to the 82nd Airborne where he began perfecting his craft. Deployed to Iraq with them and then came to the 2nd Brigade Combat Team of the 101st Airborne Division, and I and a lot of other people here thank God that he did.

“… My first day with the unit was the first time I met him; and that was a great day. Here I was, at my first permanent duty station, standing with like five stuffed bags, lost beyond belief. I was standing in this huge area with a dining facility to my left and this giant white rock to my right. I had no idea, but I see walking towards me this man, with this powerful stride and this very serious and intimidating look. I was like, ‘oh no, here we go,’ but when he got up to me; he didn’t put me at parade rest, he didn’t yell, he just put his hand out to shake mine and said, ‘So you’re Pfc. Padula.’ I go, ‘Hey how ya doin’ sergeant, anotha beautiful day.’ And then he asked me, ‘Do you really talk like that?’ I go, ‘absolutely sergeant,’ and then he said, while shaking my hand with that firm grip and looking me right in the eye, ‘Alright then Padula, we’ll make it work.’

“And he did. He made it work so well. His Public Affairs shop was non-stop … He made sure that your story was told, without fail. I miss my NCO, I miss my colleague and I miss my friend.” 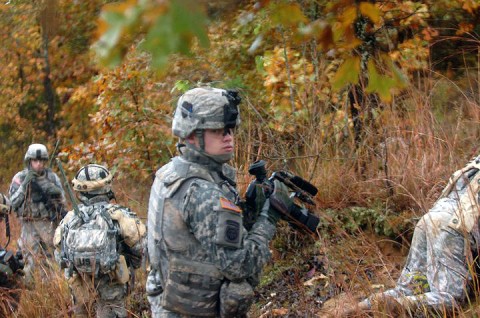 We continued what he started here at Strike and we will never forget his dedication to the mission. His legacy will always last just as long as we, the military’s combat correspondents, know his creed: to tell the Soldier’s story, you must fight by their side.

Editor’s Note: Sgt. Padula served with Staff Sgt. Hunter in the 2nd BCT Public Affairs Office, both stateside and in Afghanistan. This first-person article recounts their working relationship and friendship.