Clarksville, TN – Both Austin Peay and Eastern Illinois have struggled since the two teams met in late January.

After the Governors victory, January 24th, they have come home to lose four straight and have fallen to 2-8 in the Ohio Valley Conference. Eastern Illinois, which entered that weekend unbeaten in the OVC, have gone 1-2 in league play since. But the 6-0 league start still has the Panthers solidly in third place in the OVC West. 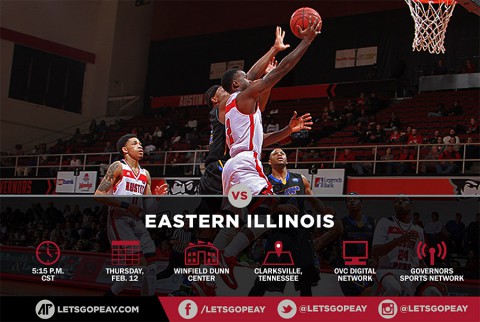 Those two teams will begin the second half of OVC West play, 5:15pm, Thursday.

Last summer the OVC and its athletics directors agreed to schedule more doubleheader basketball games during the season.

As a part of this agreement, APSU is obligated to meet federal gender-equity and Title IX scheduling requirements where game start times for men and women alternate during the season, giving both team opportunities for what is considered prime times. Originally, two were scheduled but the second one—against UT Martin, February 5th, but the Skyhawks and Lady Govs elected to play February 4th.

The Governors come desperately needing wins if they entertain any hope of gaining an OVC tourney berth. The current 7th- and 8th-place teams, Southeast Missouri and SIU Edwardsville both have six losses.

The Govs are coming off an 82-72 loss to Murray State in a game the Govs rallied from a 21-point second-half deficit to get within striking distance of the OVC-unbeaten Racers. Khalil Davis led the Govs with 23 points and 11 rebounds—his second double-double this season. Chris Horton added 16 points and 15 rebounds—his season’s 14th double-double, ranking seventh nationally.

Eastern Illinois is amidst a three-game OVC trip that took them to Southeast Missouri, 68-64, last Saturday. EIU enters the week at 14-10

Trae Anderson, who had 19 points against the Governors in the earlier meeting, posted his second double-double of the season on Saturday at Southeast Missouri with careers in points (25) and rebounds (12).

Freshman guard Cornell Johnston is chasing the EIU freshman assist record—he needs to tie it. He ranks fifth in the OVC in assists per game at 4.4.His season high is eight assists, most recently against APSU. He is averaging 8.1 points per game and leads the OVC in 3-point field goal percentage at 47.9 pct.

The Panthers have been playing without 6-8 forward Chris Olivier, who has been out since the first APSU-EIU contest, with mononucleosis.

The Series: This is the 42nd meeting between Austin Peay and Eastern Illinois, a pair of Ohio Valley Conference West foes, with the Governors holding a 26-15 advantage. The Govs have won the last two contests, the most recent a 56-52, January 24th, in Charleston, IL.