Clarksville, TN – For the first time in conference play during 2015, Austin Peay State University women’s basketball team finds itself needing a win to get back to .500 and continue its march toward the postseason when the Lady Govs host Eastern Illinois, 7:30pm, Thursday, at the Dunn Center. 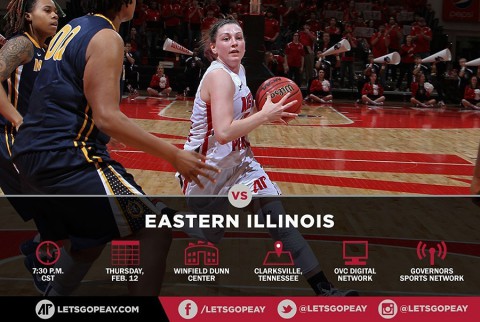 Austin Peay closes out a four-game homestand against a Panther squad it upended 66-63 in the last meeting between the two, January 24th, at Lantz Arena in Charleston.

After dropping contests to Murray State and UT Martin last week, the Lady Govs find themselves on a two-game losing streak for the first time in conference play this season.

Saturday’s 98-84 loss to the Racers was certainly disappointing, as Murray State entered play with just one conference win; despite 31 points from junior Tiasha Gray, the Lady Govs couldn’t overcome nearly 50 percent (49.2) shooting by the Racers and 31 points from OVC Player and Freshman of the Week Ke’Shunan James.

While the 31 points seemed to get Gray back on track after a couple of rough outings from the floor, Austin Peay now needs an uptick in production from senior Kristen Stainback.

The Georgetown, KY, native shot just 3-for-20 last week and suffered her first back-to-back sub-40 percent shooting performances since December 20th-30th, 2014. Just 57 points away from 1,000 for her career, a sudden shooting surge would go a long way in helping Stainback cap her career with a postseason appearance.

The Race to Eight

With five OVC wins and five games remaining, Austin Peay continues its march toward the eight-win mark in conference play. The 8-8 record has been important the past three seasons (since the advent of the 16-game schedule in 2011-12), with teams reaching that mark assured a spot in the tournament.

Eastern Illinois enters tied with Austin Peay at 5-6 in OVC play. The Panthers are on a bit of a swoon since the middle of January, losing two straight and five of six since January 15th, including a 66-63 decision against the Lady Govs, January 24th. Senior Sabina Oroszova is the only conference player averaging a double-double (16.1 ppg, 10.2 rpg) and also ranks 10th in FG pct. (45.8).

The Panther offense outside of Oroszova has struggled to get going for much of the conference season, dwelling at the bottom of the OVC in scoring offense (62.4 ppg, 11th) despite hitting 44.4 pct from the floor (2nd). Turnovers have been the Panthers undoing; EIU is turning the ball over 16.5 times per OVC contest and possess a conference-worst -4.18 turnover margin.

Gray scored 11 of Austin Peay’s final 13 points, including nine points from the free-throw line, to help secure the victory. She became the first Lady Govs player to record back-to-back 30-point games since Brooke Armistead during the 2001-02 season. Gray also had 11 rebounds – her fifth double-double this season – five steals and three assists.

Austin Peay (7-13, 4-3 OVC) led by 13 points, 45-32, after Gray found sophomore Jacey Scott, who hit a three-pointer with just 4:32 into the second half. The Lady Govs still led by 10 points after sophomore Tearra Banks converted a traditional three-point play – again with an assist from Gray – at the 9:47 mark.

Gray’s double-double led Austin Peay but senior Kristen Stainback and Banks joined her in double-digit scoring territory. Stainback hit a pair of three pointers as part of a 14-point outing. Banks was 5-of-7 from the floor and finished with a 12-point, six-rebound outing.