The ceremony signified the successful completion of a five-month deployment to Liberia in support of the U.S. Agency for International Development-led mission to fight the spread of Ebola in western Africa.

The Screaming Eagles led the JFC-UA – the Department of Defense arm of the United State’s effort – was comprised of engineers, medical personnel, logisticians and others, which built Ebola treatment units, trained health care workers to staff the ETUs, and built a logistic infrastructure to supply the ETUs.

Maj. Gen. Gary Volesky, the commander of the JFC-UA and the 101st, recognized the extraordinary circumstances in which his team was created and performed.

“Five months ago, we stood at this exact spot and uncased the colors of the 101st Airborne Division (Air Assault) to mark the establishment of the … first Joint Forces Command ever established in West Africa,” said Volesky to an audience of more than a 100 distinguished guests. “That day was the day the United States military brought our full weight to bear in support of our government’s response to contain the Ebola virus in Liberia.”

The main tenants of the JFC were build, train and sustain; however, one other tenant became self-evident – confidence.

“Our mission was to support the lead federal agency, USAID, by providing our unique military capabilities to help contain the virus and reduce the spread of Ebola in Liberia, and to execute our tasks with speed and flexibility that would not only help build confidence among Liberians that the virus could be defeated, but also help garner the support of the international community to also assist in the fight against this disease,” said Volesky.

“The Joint Forces Command worked with our Armed Forces of Liberia partners in building and overseeing constructions of ETUs,” said Volseky.

The JFC-UA built and supported 17 ETUs throughout Liberia, facilities which allowed for a more swift isolation and treatment of Ebola patients.

Building the ETUs was Task Force Rugged, a team led by the 36th Engineer Brigade based out of Fort Hood, Texas, along with the 615th Engineer Company (Horizontal) based out of Fort Carson, Colorado, the 902nd Engineer Battalion, out of Grafenwoehr, Germany, and the 161st engineer Support Company from Fort Bragg, North Carolina.

Along with constructing ETUs, Task Force Rugged also improved roads critical to the transportation of equipment and personnel to the ETUs, camps and logistical focus points like airports and sea ports.

Because the government of Liberia and the USAID saw attrition in the number of health care workers willing to come to provide care, the JFC-UA constructed the Monrovia Medical Unit, a facility specifically designed to care for and treat health care workers who contract Ebola while caring for patients.

The MMU, operated by the U.S. Public Health Service, are able to test patients for Ebola and treat and care for them all in one place.

The 1st Area Medical Laboratory, based out of Aberdeen Proving Grounds, Maryland, staffed and ran these facilities for the JFC-UA. They’re scheduled to case their colors February 28th.

“We trained over 1,500 health care workers both in Monrovia and in local communities throughout the country to work in these ETUs and care for Ebola patients, but even more importantly, to educate and provide awareness in their own neighborhoods,” Volesky said. 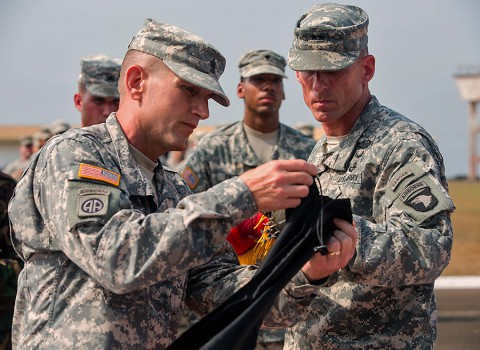 Task Force Eagle Medic, led by the 86th Combat Support Hospital from Fort Campbell, trained more these health care workers through classes based out of the National Police Training Academy in Paynesville, Liberia, and mobile training teams in the remote areas of the nation.

Task Force Eagle Medic conducted the first phase of training for health care workers, which is conducted before they move on to the second phase conducted by the World Health Organization and the Liberian Ministry of Health inside operational ETUs.

After completing of their training, which they conducted in conjunction with the World Health Organization, Task Force Eagle Medic transitioned their classes to the WHO completely.

Though ETUs were being built, they needed to be regularly supplied so that they could operate safely and effectively. To that end, the JFC-UA built a robust logistics and supply system that webbed across Liberia. 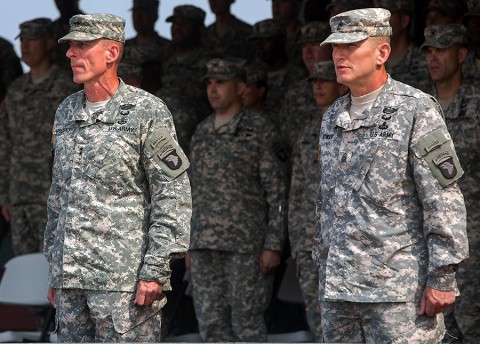 The logisticians from the 101st Airborne Division (Air Assault), with the help of the World Food Programme, built forward logistics bases, which allowed them to place supplies closer to remotely located ETUs.

“Moreover, we established logistical systems to move building materials, medical supplies and water to the areas most in need, regardless of how remote the location was,” said Volesky.

The Iron Knights transported personnel, supplies and equipment, and building material to ETUs, mobile labs and forward logistics bases throughout the country – many times to locations where ground vehicles were unable to travel.

The Iron Knights cased their colors February 25th and are steadily redeploying their Soldiers back to Fort Bliss.

As well, the 101st Sustainment Brigade, deployed as Task Force Lifeliner, ran port operations, bringing in units’ equipment, vehicles and aircraft from the U.S. and sustaining the entire JFC-UA during Operation United Assistance, tasks that are required before any other mission was to get off the ground.

Volesky stressed that the progress the JFC made was done so with transition and continuation of the mission well after the 101st left Liberia.

“While our large scale military mission is ending as the 101st departs Liberia, the fight to get to zero Ebola cases will continue and the JFC has ensured capabilities we brought will be sustained in the future,” said Volesky.

“ETU construction tasks, health care worker training, and logistical sustainment operations for Ebola containment have been transitioned to reliable partners that will continue supporting the fight against EVD,” he said. “Our Army labs have transitioned and will be operated by organizations that don’t just test for Ebola, but also other infectious diseases such as Malaria and Lasa Fever.”

Though the 101st and the JFC have officially ended their tour in Liberia, a small contingent will remain to ensure a smooth transition of the mission to the government of Liberia and nongovernmental agencies.

“And while the JFC will redeploy, over 100 Soldiers will stay for a few more months more to monitor the continued progress against EVD to ensure the gains we have made together are lasting,” said Volesky.

Before Volesky cased the 101st colors with Command Sgt. Maj. Gregory Nowak, the senior enlisted adviser of the JFC and the 101st, he thanked the service members for all of their hard work throughout the deployment.

“Lastly and most importantly, I want thank the Soldiers in front of us that represent the 2,500 servicemen and women of the Joint Forces Command,” said Volesky. “Throughout our operation, most discussion has centered on capabilities or technology we used to build infrastructure, or to move supplies. But it is the people who matter, not the equipment or technology we use. People have the ingenuity to solve wicked hard problems, and have the determination to see solutions through.”

Volesky left the audience with his final thoughts before he cased his unit’s colors.

“So as we case these historic colors – colors that have fought and won in combat against enemies across the globe – we close our latest Rendezvous with Destiny that helped the people of Liberia defeat an unseen, but just as deadly enemy,” he said. “And when we uncase these colors back home at Fort Campbell, Kentucky, know that the country of Liberia and its people will remain in our hearts and minds.”