Cape Girardeau, MO – With the OVC Tournament looming next week, Austin Peay State University women’s basketball team has one final tune-up when it travels to Southeast Missouri, Saturday, for a 3:30pm contest against the Redhawks.

More will be on the line than just the final dress rehearsal for the tournament. 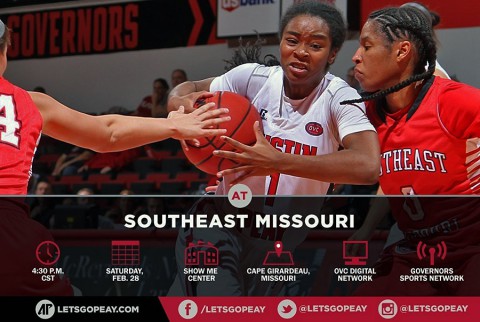 An Austin Peay victory against the Redhawks coupled with an Eastern Illinois loss at SIU Edwardsville would give the Lady Govs the No. 7 seed by virtue of sweeping the season series against the Panthers.

Junior Tiasha Gray may have a little extra incentive in this matchup. The Clarksville native, who is averaging 20.8 points and poured in 36 her last time out at Murray State, had an off-night the last time she faced the Redhawks, scoring eight points, adding eight assists, six rebounds and three steals.

Senior Kristen Stainback hopes to break through a historical barrier at the Show Me Center. The Georgetown, KY, native needs just six points to become the 18th player in Austin Peay history to score 1,000 points in her career.

In recent times, eight wins would be enough to guarantee a team a spot in the Ohio Valley Conference Tournament. However, six wins is a guaranteed invitation for the Lady Govs thanks to Eastern Kentucky’s loss to Jacksonville State, Monday.

It will be Austin Peay’s first visit to the championships since 2011-12, when the Lady Govs advanced to the quarterfinals before falling to Murray State. A win for the Lady Govs and a loss by Eastern Illinois at SIU Edwardsville also assures Austin Peay the No. 7 seed and a 2:00pm, Wednesday, March 4th battle against the Cougars in the OVC Championship.

While senior Jasmine Robinson leads the Redhawks with 12.0 ppg (16th in the conference), no other Southeast Missouri player is averaging more than nine points per contest. The Redhawks have just three wins since the start of the new year, all in conference play, but only one, against Eastern Illinois on February 7th, against a team in the OVC Tournament field.

Austin Peay saw its “triple-post” offense at its most effective in a 70-62 Ohio Valley Conference victory against Southeast Missouri, January 31st.

Since returning from the Christmas break, Austin Peay (8-14, 5-4 OVC) has employed a “triple-post” composed of Beth Rates, Jennifer Nwokocha and Brianne Alexander. That combination finally paid off  in the  win combining for 43 points and 22 rebounds.

The Lady Govs would push their lead to 14 points, 21-7, when Tiasha Gray hit a layup nine minutes into the game. However, Austin Peay would get mired into an offensive drought – making just two field goals over the next six minutes.

Southeast Missouri (8-14, 1-8 OVC) countered with a 18-5 run over that six-minute span, slashing Austin Peay’s lead to one point, 26-25, with 4:13 left. Rates ended the SEMO run with a layup and Kristen Stainback hit a three-pointer on the next possession to quickly push the lead back to six points.