Entering head coach Kirby Cannon‘s third season, a still-youthful Austin Peay squad looks to pull the Governors out of a tailspin that’s seen them in the Ohio Valley Conference cellar for the better part of the decade. 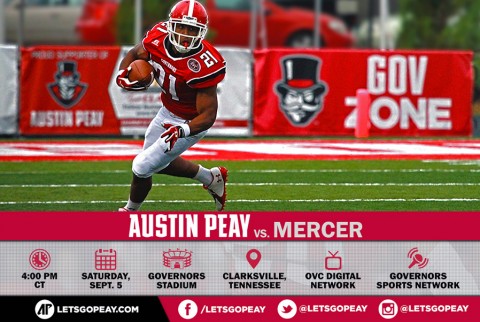 A whopping 33 freshmen and sophomores can be found on the opening-week Austin Peay two-deep and the Govs feature just eight total seniors on the roster.

The front six of Austin Peay’s 4-2-5 defense owns much of the Governors upper-class strength, boasting linemen Gino Roberson, John Houston Jr. and Corey Teague and linebackers Antonio Turner and Adam Noble, with a trio of pass-rushing sophomores (Taylor Parris, Tyler Schneider and Jule Pace) set to come off the edges to wreak havoc in opposing backfields.

Seeking to become the first Gov to record 100-plus tackles in a single season since Daniel Becker in 2008, Turner was rated the 52nd-best returning FCS linebacker by Phil Steele Online during the offseason.

Returning 24 starters from last season, Mercer was tabbed to finish sixth in both the Southern Conference’s coaches and media polls. Running back Alex Lakes served as Mercer’s lone preseason all-conference pick; he carried the ball 200 times for 1,107 yards and 17 touchdowns in 2014.

The Captains Are Here

Noble, senior quarterback Trey Taylor and junior offensive lineman Tyler Miles were named captains for the 2015 season. It will be Noble’s second season of captaincy, and the first for Miles and Taylor.

“Those guys were elected off their performance as leaders,” Cannon said. “We don’t vote on captains in the spring or early in the summer, we let some of that leadership come to the surface. Those three are consistent as people and in their practice habits. Football players love to be led by example and will listen to guys who lead by example.”

Taylor won the starting quarterback nod with an exemplary fall camp, while Noble has been a longtime stalwart at linebacker. As one of two starters along the offensive line with Division I offensive line experience, Miles will be leaned on heavily to protect Taylor and open running lanes for Otis Gerron, Kendall Morris and the rest of the Govs backfield.

Last Time Out Against the Bears

Austin Peay and Mercer met for the first time in 2014, with the Governors coming out on the wrong side of a 49-21 decision that saw the Bears race out to a 28-0 first-quarter lead, thanks to two John Russ touchdown passes and a Chandler Curtis 61-yard punt return for touchdown.

Check back at www.LetsGoPeay.com and on Austin Peay’s Official Athletics Facebook page often for up-to-date news about all Governor athletics, as well as the Governors football Twitter page (@AustinPeayFB).

Live stats will be available during the game at www.LetsGoPeay.com, and all home games and Ohio Valley Conference games can be viewed on www.ovcdigitalnetwork.com. Postgame video interviews and other videos from around APSU Athletics can be found on our YouTube page (www.youtube.com/CultureofExcellence).