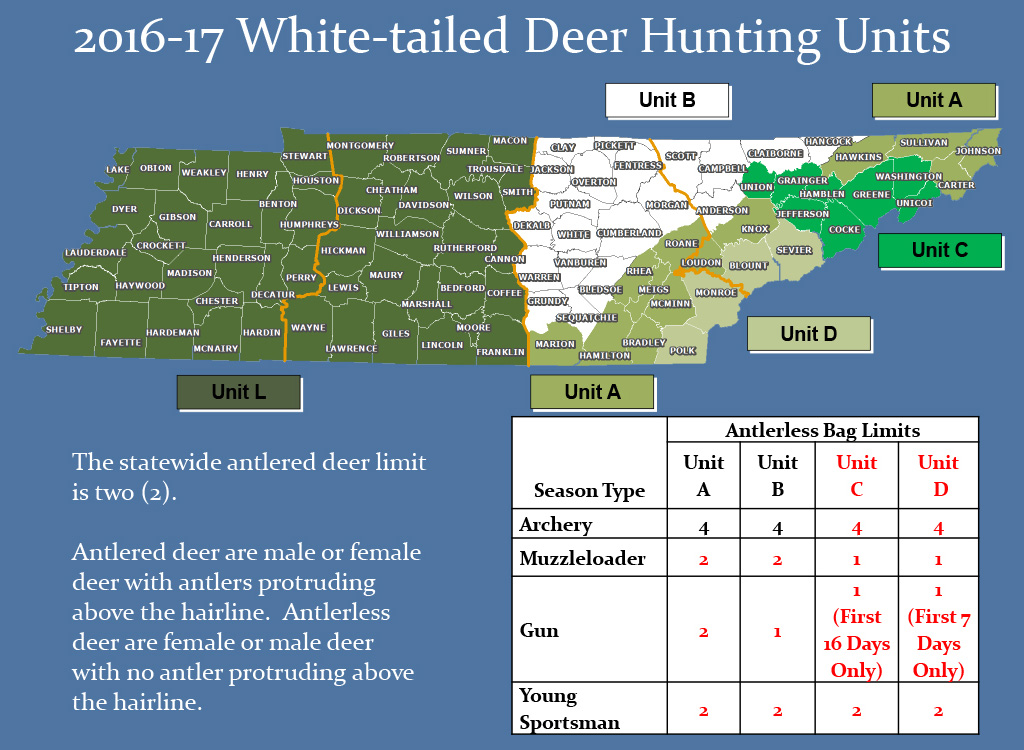 Tullahoma, TN – The Tennessee Fish and Wildlife Commission approved the state’s 2016-17 hunting seasons at its May meeting which concluded Friday at the Arnold Air Force Base Gossick Leadership Center. 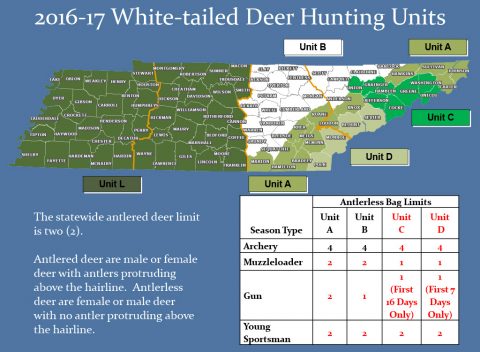 For big game hunting seasons, the TFWC changed the definitions of antlered and antlerless deer.

Previously, a deer with antlers less than three inches in length were considered antlerless.

From now on, a deer harvested with any antler protruding above the hairline will count toward the statewide antlered deer limit of two.

The commission approved two additional deer hunting units, C and D. The antlerless bag limit for archery is four and one during the muzzleloader season in these units. For gun season, the bag limit is one in Unit C for the first 16 days and one in Unit D for the first seven days.  Some previous Unit A and B counties are now in other units.  (An updated deer unit map is available on the TWRA website).

Changes were made to the elk permits. The previous six permits continue but will now also be valid on private lands within the following five counties. The counties are Anderson, Campbell, Claiborne, Morgan, and Scott.  Additionally, five new archery only permits were added, also valid on North Cumberland WMA and private lands within the five counties.  Archery hunt dates are October 3rd-7th, 2016.

For TWRA Wildlife Management Areas, the most notable recommendations are establishing seasons for newly proclaimed areas.

Chuck Yoest, TWRA Wildlife and Forestry Division assistant chief, gave an in-depth presentation on the Agency’s Chronic Wasting Disease response plan if the disease was to ever spread to Tennessee. The disease has now been confirmed in 24 states and two Canadian provinces.

Wes Winton, Wildlife Manager at WEDC Wildlife Management Area, was recognized for earlier receiving the National Fish and Wildlife Award for Law Enforcement. Air Force Col. Jim Krajewski was at the meeting to make the presentation.

A Meritorious Service Award was present to Fisheries Technician Jeff Sanders. He was recognized for his work at the Flintville Fish Hatchery while the late manager, Stacy Surgenor, was in his battle with cancer.

The meeting was the TFWC’s final meeting until August. The TFWC will hold its next meeting August 18th-19th in Crossville.