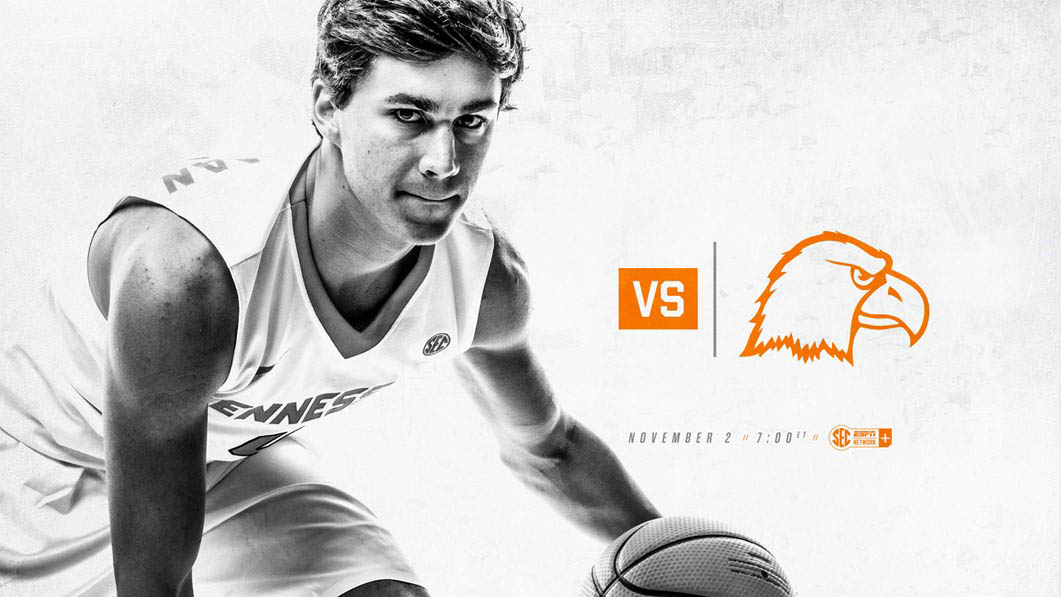 Knoxville, TN – Tennessee plays its first of two exhibition games of the 2017-18 preseason Thursday when it welcomes Carson-Newman to Thompson-Boling Arena for a 6:00pm CT tip.

Thursday’s game telecast (broadcast) will be available via the internet through SEC Network + or the WatchESPN app. Visit WatchESPN.com or download the WatchESPN app to view the game on a computer or mobile device. Roger Hoover (play-by-play), Vincent Yarbrough (analyst) and Maddy Glab (reporter) will call the action.

Fans can also tune into their local Vol Network station to catch Bob Kesling describing the first basketball action of the season. 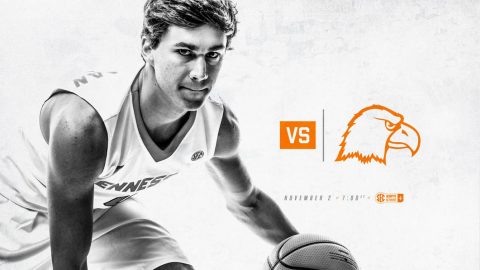 Last week, the NCAA approved a waiver enabling Clemson to host a men’s basketball charity exhibition game against Tennessee on Sunday, November 5th, at Littlejohn Coliseum, with net proceeds going toward hurricane relief efforts in Texas and Florida. Tipoff for the exhibition is set for 11:30pm CT.

Admission is free, although donations to the Salvation Army’s continued hurricane relief efforts in Texas and Florida are encouraged. The game will not be televised, and there will be no video stream available.

From 1996-2003, Benson was the head coach at NAIA Martin Methodist College in Pulaski, Tennessee.

He started all 56 games in which he appeared under head coach Kevin O’Neill, and Williams later served as a graduate assistant on O’Neill’s Tennessee staff during the 1996-97 season.

Before landing on staff at Carson-Newman, Williams coached at Science Hill HS as well as at Heritage High School in Maryville, Tennessee.

UT held Carson-Newman to 16.7 percent shooting during the second half. The Eagles were limited to just 22 second-half points.

Tennessee forward Jeronne Maymon exploded for 10 points, 15 rebounds and four assists while also drawing two charges. His 15 boards were the most by a Vol since Wayne Chism grabbed 15 against Ole Miss on March 12th, 2010.

There are five Vols who hail from the state of Tennessee, two from North Carolina and one each from Alabama, Delaware, Illinois, Missouri, Ohio, Texas and Virginia.

This is the first time since 2006-07 that the Vols’ roster has not included at least one player from the state of Georgia.

Thirteen Vols stand 6-5 or shorter, and three players are 6-6 or taller.

Tennessee completed a 10-day European tour that saw them post a 3-0 record in exhibition play while visiting Barcelona and Valencia, Spain as well as Paris, France.

All three games were played against local professional clubs and were contested with a FIBA ball under international FIBA rules.

Chris Darrington finished the tour with the highest scoring average on the team (14.3 ppg)—barely edging out Lamonté Turner (14.0 ppg).

Junior forward Admiral Schofield, is uniquely prepared to shoulder more of a leadership role heading into the 2017-18 season. He spent the 2016-17 academic year as one of 18 members of Tennessee’s VOLeaders Academy program.

The first-of-its-kind program is a dynamic partnership between the UT Center for Leadership and Service, the Center for Sport, Peace and Society and the Athletics Department. By using their platform in sport, student-athletes admitted into the VOLeaders Academy learn how to positively impact their team, campus and local and global communities. The program aims to inspire student-athletes to find ways to use their passion of sport and their influence to enact positive change that transcends their athletic success.

And back in May of 2016, Schofield attended the Athletes in Action “Captain’s Academy” leadership camp and conference in Xenia, Ohio.

Entering his third year with the Tennessee basketball program, Schofield is the most experienced returning Vol in terms of career minutes played (1,131). In 60 career games, the Zion, Illinois, native has averaged 7.9 points and 4.2 rebounds per game while shooting .449 from the field and .336 from 3-point range.

Three players on Tennessee’s roster are questionable for Thursday’s exhibition.

Redshirt freshmen John Fulkerson and Jalen Johnson each were recently cleared by team medical staff for full participation, but they are gradually working their way back from significant injuries/offseason procedures.

As a junior in 2015-16, Daniel led all Division I scorers with an average of 27.1 points per game (Oklahoma’s Buddy Hield ranked second in the nation with 25.0 ppg).

Daniel’s career shooting percentage stands at .366, including a .335 mark from 3-point range and an .822 mark at the charity stripe.

Daniel has averaged more than 30.0 minutes in each of his collegiate seasons, logging more than 3,000 total minutes (33.9 mpg) over his career.

He led the Bison in scoring in each of his three full seasons with the program and totaled 14 30-point games.

Daniel has failed to score in double figures only six times in 90 games played during his career.

The addition of two veteran guards during the offseason has given Tennessee arguably its deepest backcourt of head coach Rick Barnes’ tenure on Rocky Top.

Grad transfer James Daniel III and junior-college transfer Chris Darrington each are proven scorers who figure to provide significant contributions this season. Daniel was the leading scorer in all of Division I in 2015-16 (see next note), while Darrington was a first-team juco All-American last season.

Despite standing just 6-7, Grant Williams broke the Tennessee single-season record for blocks by a freshman last season. Williams posted 61 blocks in 32 games, destroying the previous record of 38, set by C.J. Black in 1996-97.

Williams’ 61 blocks also ranked as the second-most ever recorded in a single season by a Vol (regardless of class). And his 1.9 bpg average ranked third all-time for a single season.

During Tennessee’s win at Texas A&M on December 29th, 2016, Williams tied the UT record for blocks in a game, with six. Five other Vols share that record, including current Vols junior Kyle Alexander.

If Williams at least matches his blocks total from a season ago, he would rank tied for ninth on Tennessee’s career leaderboard with two years of eligibility remaining.

From his freshman to sophomore campaigns, Alexander saw an increase in his minutes, points, rebounds and blocks per game. His field-goal percentage also improved.

The Tennessee roster has included at least one international student-athlete every year since Barnes took over as head coach.

The 2017-18 season marks the 10th anniversary of Tennessee’s 2007-08 SEC Championship team. The Volunteers went 14-2 in SEC play and posted a final record of 31-5. Led by senior Wooden All-American guard Chris Lofton (15.5 ppg), the Vols reached the Sweet Sixteen in Charlotte, where they fell to Louisville. Tennessee’s 31 total victories that season stand as a program record.

Also in 2007-08, Lofton set the school record for 3-pointers made in a season by draining 118 shots from beyond the arc.

This season marks the 20th anniversary of C.J. Black recording a school-record for blocks in a season. He swatted 73 shots as a sophomore during the 1997-98 campaign. His 2.52 blocks per game that season also stand as a program record.

Tennessee moved into its current home facility, Thompson-Boling Arena, for the 1987-88 season. That year, the Vols set a school record for average home attendance, drawing 20,823 fans per game at their brand new venue. This season marks the 30th anniversary of Thompson-Boling Arena.