“The next stop for our colors once we case them is back in Bagram, where we have fought and dominated before,” said Poppas before furling the Screaming Eagle colors in front of hundreds of onlookers who attended the ritualistic ceremony. “This is nothing new for the 101st. In the 17 years of continuous combat, the 101st is the most deployed division.”

Unlike the division’s past deployments to the country, which were focused in the eastern region, the division will oversee NATO’s train, advise and assist mission and U.S. counterterrorism operations nationwide.

Poppas will serve as both the U.S. Forces-Afghanistan deputy commanding general for operations and the Resolute Support deputy chief of staff for operations.

Resolute Support is a NATO-led mission that began January 1st, 2015, following the end of the NATO-led International Security Assistance Force mission and the Afghan National Defense and Security Force’s assumption of security nationwide.

Poppas said that this deployment, and the responsibilities associated with it, will require a herculean effort.

“We are prepared for it,” he said as he explained the current Afghan National Defense and Security Forces’ and forthcoming 101st Airborne Division mission. “We’re ready physically; we’re ready emotionally; we’re ready spiritually. The formation is ready. The Soldiers of this division, in this Army, are as bright and innovative as they are lethal.” 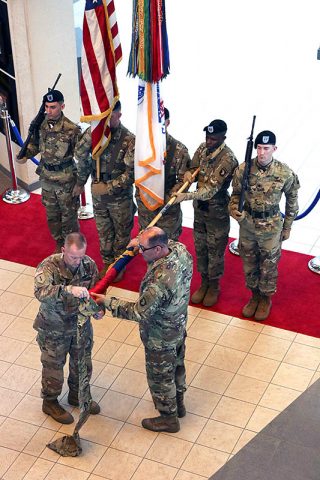 “As we finished our last exercise, we’ve been able to synchronize the complex combined arms activity down to the most infinite detail on a three-dimensional battlefield,” said Poppas of the competence his staff demonstrated during the Warfighter. “It’s what we do, and we’re able to apply that to Afghanistan. We’ve proven over and over again that we can outthink, outfight and will always dominate whoever we stand against.”

Poppas said Royar and Manning are a remarkable leadership team who will, alongside the U.S. Army Garrison Fort Campbell leaders, maintain strong partnerships and connections with the local community and look after the family members during the deployment.

“Any deployment is not without sacrifice, and that burden is carried by these Soldiers who will fight gallantly, but it’s also our families, our spouses, our children who give us steadfast love and support while we’re away,” said Poppas. “It’s especially true of our community – Clarksville, Hopkinsville, throughout Kentucky and Tennessee and beyond – this is the community who supports us.”

More than 200 well-wishers were in attendance at the color casing ceremony, including Jenean Hampton, Lieutenant Governor of Kentucky, county and city mayors, Civilian Aides to the Secretary of the Army, Champions of Fort Campbell, Fort Campbell senior leaders and family members. 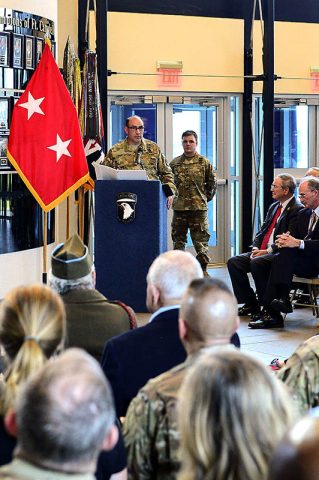 “From Bastogne forward, all the way through the Eagle’s Nest, he is the one, and his comrades who were with him, who have set and earned that reputation of bravery in combat,” said Poppas as the audience responded with a standing ovation to honor Speranza during the ceremony. “And, we’re prepared to build upon that ‘Legacy of Heroism.’