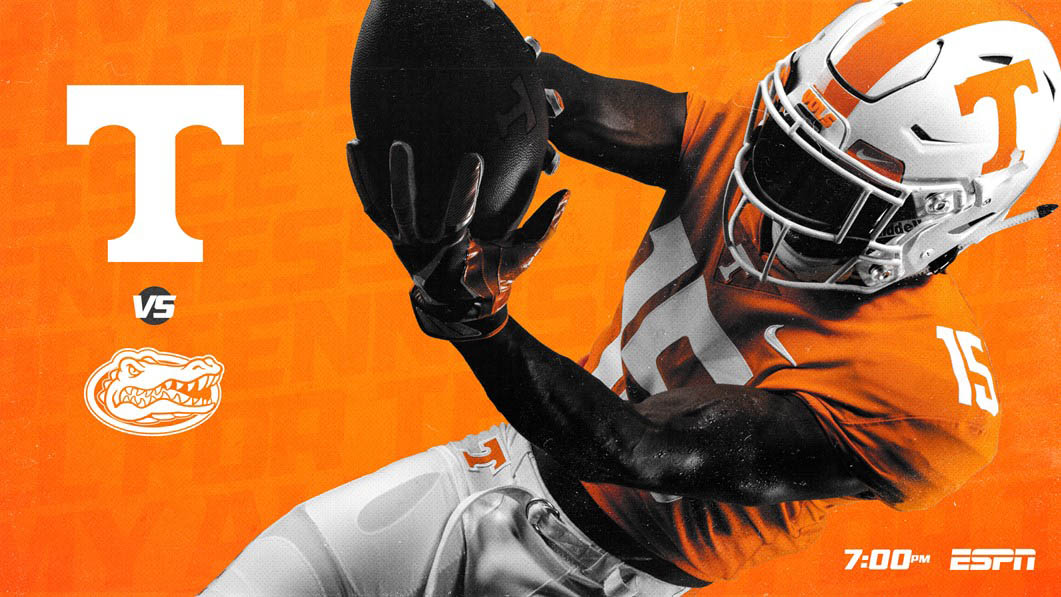 Knoxville, TN – Tennessee Football will open Southeastern Conference play under the lights at Neyland Stadium on Saturday night as Florida comes to town for a clash between SEC East rivals.

Kickoff for Saturday’s contest is slated for 6:00pm CT on ESPN with Adam Amin (play-by-play) and Rod Gilmore (analyst) calling the action in the booth while Quint Kessenich will be reporting from the sidelines. Vol Network radio affiliates will have a live audio broadcast with Bob Kesling, Tim Priest and Brent Hubbs. Sirius (Channel 103) and XM satellite radio (Channel 191) will also carry the game. 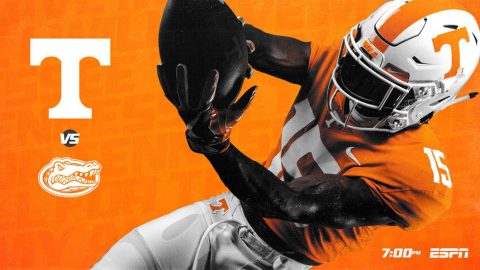 The Vols have won back-to-back home games over East Tennessee State and UTEP entering Saturday’s SEC opener against the Gators.

The Big Orange will be looking to earn their second straight win over Florida at home after snapping an 11-game losing streak to the Gators with a 38-28 victory at Neyland Stadium in 2016.

Saturday with mark the 48th meeting all time between Tennessee and Florida. The Gators hold a 27-20 edge in the series and won last year’s meeting, 26-20, on a 63-yard Hail Mary from Feleipe Franks to Tyrie Cleveland on the game’s final play.

UT scored 38 unanswered points to erase a 21-0 deficit and snap an 11-game losing streak the last time the two teams met inside Neyland Stadium back in 2016. Each of the last four meetings between the Vols and Gators have been decided by 10 points or less.

Tennessee Football will welcome back members of the 1998 undefeated National Championship team for a 20th anniversary reunion this weekend and an on-field celebration at the end of the first quarter. Select members of the 1998 team will also be honored as “Legends of the Game” prior to kickoff.

Since the Vols and Gators began playing each other every season in 1990, the teams have met inside Neyland Stadium with a kickoff time of 6:00pm CT or later on four occasions.

After struggling in the season opener against a high-powered West Virginia offense, the Vols have been stout on the defensive side of the ball for the past two games.

UT’s defense did not allow a touchdown in wins over ETSU and UTEP, marking the first time that the Vols have held opponents out of the end zone in back-to-back games since 2003 in wins over Miami and Duke.

The three combined points Tennessee has allowed over the past two games is the fewest in a two-game stretch since recording consecutive shutouts against Kentucky and Vanderbilt in 2002. The Vols’ shutout of UTEP last week was the program’s first against an FBS foe since a 24-0 victory over North Texas on November 14th, 2015.

The Orange and White have already posted five plays of 50 or more yards on offense this season. The Vols had just four 50-plus yard plays all of last season.

Redshirt sophomore quarterback Jarrett Guarantano has completed three passes over 50 yards, two of them going to fellow sophomore Josh Palmer, who already has 50 more receiving yards then he did all of last season. Palmer is averaging 24.7 yards per reception this year, which ranks eighth nationally.

The Gators enter Saturday’s game with a 2-1 record after posting victories over Charleston Southern (53-6) and Colorado State (48-10). UF dropped their SEC opener to Kentucky (27-16) two weeks ago, ending a 31-game win streak against the Wildcats.

Florida is led by Dan Mullen, who is in his first season as the Gators head coach after a successful nine-year stint as the head man at Mississippi State. Mullen is a familiar face in Gainesville after serving as the program’s offensive coordinator from 2005-08, helping lead the Gators to a pair of SEC and National Titles in 2006 and 2008.

Dameon Pierce, Jordan Scarlett and Lamical Perine will see the bulk of the carries for the Gators. Pierce leads the team with 162 yards on the ground while Scarlett has added 105 and Perine has rushed for 99.

On defense, UF is one of the top teams in the country at creating takeaways. The Gators’ defense has already forced eight turnovers to go along with 20 tackles for loss and eight sacks. Florida’s plus-five turnover margin ranks ninth in the nation and second in the SEC.