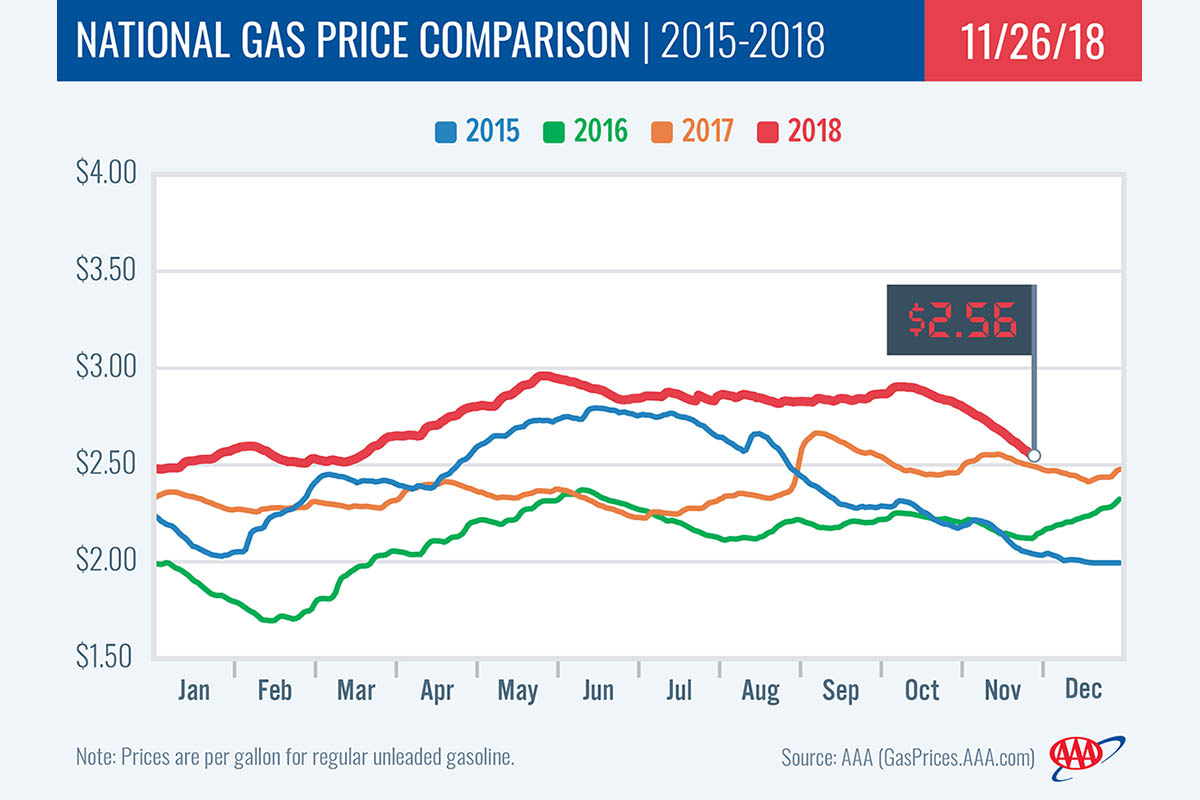 Tampa, FL – On the week, the national gas price average has dropped seven cents to land at $2.56. As pump prices steadily decline, they are headed toward some of the cheapest gas prices in 2018. The national average was lowest in January at $2.49 while May brought the most expensive price of $2.97.

“Trends are indicating that the month of December may bring some of the cheapest gas prices of the year,” said Jeanette Casselano, AAA spokesperson. 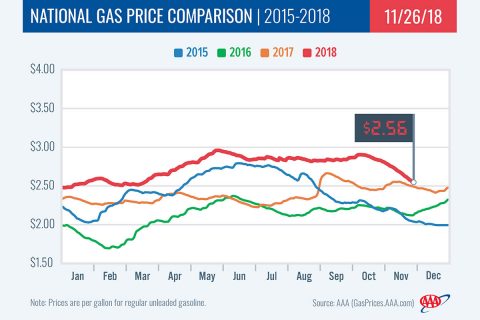 “Currently, 19 states already have gas price averages less expensive than a year ago so as U.S. gasoline demand remains low and supply plentiful, motorists can expect to save at the pump as long as the price of crude oil doesn’t spike,” stated Casselano.

Gas prices have been cheaper in the U.S. as crude oil sells at $57.00/bbl and cheaper – the lowest prices of the year.

However, market observers warn crude could see an increase following the Organization of Petroleum Exporting Countries (OPEC) meeting on December 6th in Vienna, Austria. At that meeting, OPEC is expected to curtail crude production by 1 million to 1.4 million barrels per day, which could cause crude prices to rise due to reduced global supply, in turn causing gas prices to turn higher in America. 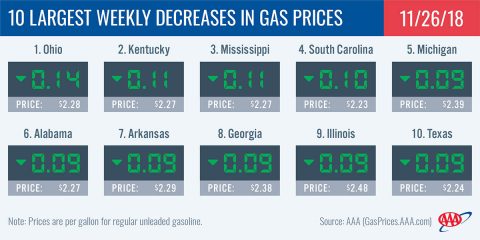 On the week, gas prices are as much as 14 cents cheaper in Ohio. Today, state gas price averages range from $2.58 in North Dakota to $2.18 in Missouri.

The week’s prior build in gasoline inventory for the region was cancelled out as stocks drew by nearly half a million according to the Energy Information Administration’s (EIA) latest data. Total stocks continue to register just above the 46 million bbl mark and year-over-year, inventory is at a 1.1 million bbl surplus. Despite the draw, regional utilization jumped seven percent to 91.4 percent indicating that stocks could build in the coming weeks and help to make prices even cheaper.

Across the Mid-Atlantic and Northeast states, gas prices are cheaper on the week with Washington, D.C. seeing the smallest decrease (-2 cents) and Tennessee seeing the largest decrease (-8 cents). As pump prices continue to decline, all state averages remain well below the $3.00/gal mark – a vast change from this summer when Connecticut, New York, Pennsylvania and Washington, D.C. were routinely at this mark.

This week, Delaware ($2.24), Maryland ($2.42) and Pennsylvania ($2.76) have state gas price averages cheaper than one year ago with a year-over-year difference of 18, five and one cent respectively.

Gasoline stocks dramatically declined by nearly 3 million bbl on the week to drop stocks to a total of 61.7 million bbl. EIA data shows that stock levels have not been this low since April of this year. The large draw in stocks kept state gas price averages from seeing large declines this week.

There are five states in the South and Southeast region landing on the Top 10 list of largest weekly declines: Mississippi (-11 cents), South Carolina (-10 cents), Alabama (-9 cents), Arkansas (-9 cents) and Texas (-9 cents). With a seven-cent drop, Florida and North Carolina saw the smallest decreases in the region.

Refinery utilization in the South and Southeast increased two percent as stocks built by nearly 2 million bbl on the week, according to EIA data. Total stocks sit at 83.7 million bbl, a level not seen for the region since the end of June. The large increase in stocks contributed to the large decreases in gas prices this past week.

The EIA’s weekly petroleum status report for the week ending on November 16, showed West Coast gasoline stocks increased by 300,000 bbl to 26.9 million bbl. Stocks are approximately 1.3 million bbl lower than at this time last year, which could cause prices to spike if there is a supply challenge in the region this week.

For the first time since April, Idaho’s gas price average drops below $3/gal to $2.97. While all states are selling below the $3/gal mark, four continue to carry among the most expensive averages in the country:  Idaho ($2.97), Utah ($2.91), Montana ($2.86) and Wyoming ($2.86). On the week gas prices decreased as much as six cents in Colorado, five cents in Idaho, and as little as two cents in Wyoming.

With a draw of 130,000 bbl, stocks in the Rockies region fell to 6.8 million bbl. Coincidentally, stocks sit at a 130,000 bbl year-over-year surplus. Refinery utilization declined as well, according to the latest EIA data.