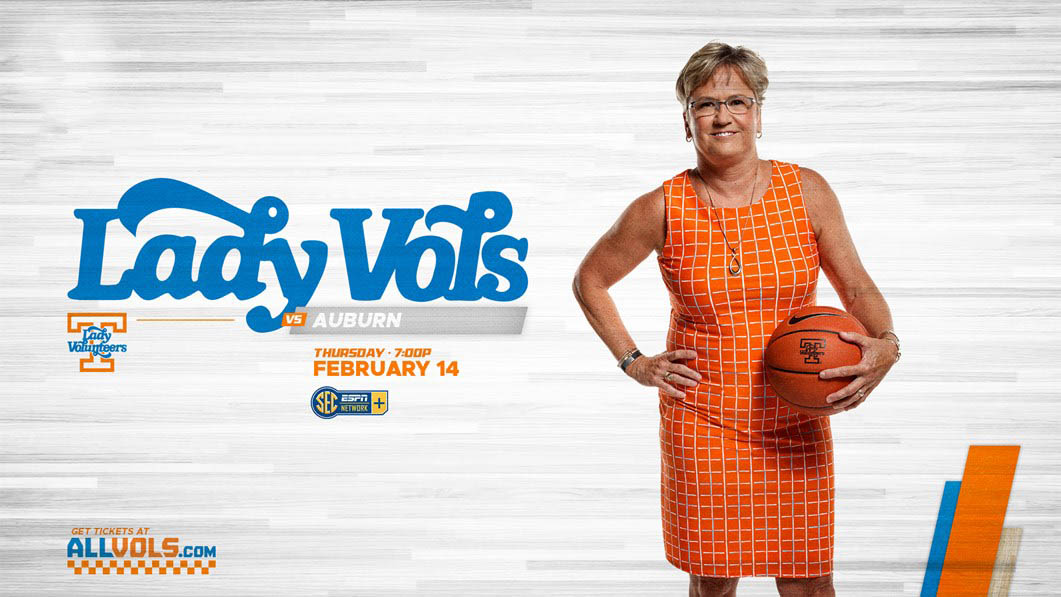 Knoxville, TN – The Tennessee Lady Vols (15-8, 4-6, SEC) returns home after a two-game road swing, hosting Auburn (18-6, 6-5 SEC) on Thursday night, February 14th at Thompson-Boling Arena. Tip-off is slated for 6:02pm CT on Valentine’s Day in a contest that will be streamed by SECN+.

Including this match-up, the Lady Vols have six contests remaining during the regular season. Three are at home (Auburn, South Carolina, Vanderbilt) and three are away (Missouri, Texas A&M, Ole Miss). 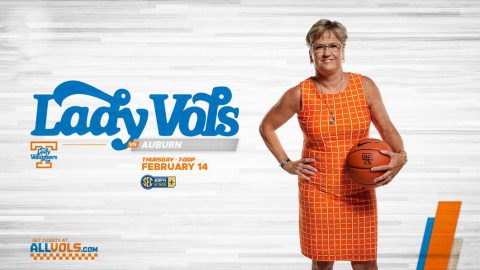 It was a three-point game with 6:09 to go in the third and a six-point contest with 2:06 remaining in that period before MSU used a 21-2 run spanning the third and fourth stanzas to pull away.

UT played without starting point guard and leading scorer Evina Westbrook, who sat out the game due to a violation of team rules.

First-year point guard Jazmine Massengill started in place of Westbrook, giving UT two freshmen, two sophomores and a senior in the starting lineup vs. MSU’s four seniors and a sophomore. Westbrook is expected back for the Auburn game.

Despite the loss, Tennessee comes into the game having won three of its past four contests, defeating LSU, Florida and Vanderbilt in succession. Auburn comes to town on the heels of a 75-72 victory at Arkansas on Sunday. The Tigers also have won three of their past four, handling Ole Miss, Georgia (in OT) and Arkansas, while falling to Kentucky the game before last.

Tennessee won the first match-up this season between these teams, defeating the Tigers, 78-69, at Auburn Arena on January 3rd to open league play for both teams. Meme Jackson had 27 points in that game.

Bob Kesling (play-by-play), Madison Blevins (analyst) and Antonia Buffalino (sideline) will have the call for the SECN+ broadcast.

It’s “Volentine’s” Day! No reservations required for a Valentines date on the Summitt. Two tickets for the price of one. Enter to win a rose and chocolates delivery from Smokey during the game. Tickets at AllVols.com and promo code: VolentinesDay.

Kids 12 & younger can pick up a wristband at the Fan HQ table on the concourse to participate in the pregame high-five tunnel. Wristbands are limited. To purchase discounted group tickets and reserve wristbands for your team, call 865-946-7000.

The halftime performance will be by Rolla Bolla.

Tennessee has limited Auburn to 66 points or fewer 11 of the last 13 times they’ve met and to 61 or less on nine of those occasions.

Re Gets Her Groove Back
After hitting a four-game rough patch from January 13th to 24th, Rennia Davis has re-emerged in all-star form in the past four games. She posted double-doubles vs. Florida (19 pts., 10 rebs.) and Vandy (17 pts., 12 rebs.) two weeks ago. She previously had 24 points and seven boards vs. LSU. She went off for 29 points vs. Mississippi State on Sunday.

Dishin’ & Swishin’
Evina Westbrook has 14 games of five or more assists and is averaging 5.1 dimes for the season. With a 16.0 ppg. average, she has the highest all-time single-season scoring average for someone with five assists or more.

Zaay Ahead of Schedule
Zaay Green has been a productive freshman, starting 19 games and averaging 10.3 ppg. and 4.4 rpg. She has hit for double figures 12 times.

Cheridene Stepping Up
First-year starter Cheridene Green has upped her averages to 8.9 points and 9.0 rebounds in SEC play.

Strong On The Boards
UT has won the rebounding battle in 19 of 23 games, including nine of 10 SEC contests (MSU won, 39-30). UT’s SEC-games 45.4 per contest average is No. 1 in the league ahead of MSU (43.6). Tennessee has had at least one player pull down double digits in rebounds in every SEC game this season except the Mississippi State contest.

“D” Is Crucial
n its four SEC wins, UT is allowing 62.2 ppg., while in its six losses, the Lady Vols are surrendering 77.0 per contest.

Need Those Three-Balls
Tennessee went 5 of 13 from the arc vs. Mississippi State (.385), marking its best 3FG percentage since hitting .467 (7-of-15) vs. Auburn in the first meeting back on January 3rd.

The Lady Vols scrapped to within three in the third quarter but couldn’t overcome a No. 6 Mississippi State team that shot an impressive 52.2 percent on the day en route to a 91-63 victory.

Tennessee (15-8, 4-6 SEC) was led by sophomore Rennia Davis, who fired in a season-high 29 points. Freshman Zaay Green also was in double figures with 13.

MSU’s (22-1, 10-0 SEC) high scorer was senior Teaira McCowan, who logged a double-double with 24 points and 15 rebounds. Seniors Jordan Danberry and Anriel Howard also had big days for MSU, finishing with 20 and 16 points, respectively. Howard added 11 rebounds to claim a double-double on the afternoon.

Tennessee went a perfect four of four from the free throw line and converted on back-to-back layups to pull within three at 47-44 at the 6:09 mark of the third. MSU answered with an 8-3 run to stretch the lead to eight with 2:57 to play in the period. The Bulldogs went on to build that lead to 12, taking a 61-49 lead into the final stanza en route to the win.

Auburn returned six letterwinners, including four starters from 2017-18, including stars Janiah McKay, Unique Thompson and Daisa Alexander. Those are their three leading scorers this year.

The Tigers like to press and average 12.6 steals and force 21.2 turnovers per contest.

UT ended the Tigers’ season in the SEC Tournament second round, 64-61, on an off-the-glass, three-point buzzer-beater by Rennia Davis.

Daisa Thompson made the 2018 SEC All-Defensive Team, while Unique Thompson was All-Freshman.

Four Tigers scored in double figures, as Auburn held off a late Arkansas rally to earn a thrilling 75-72 win Sunday afternoon in Fayetteville.

The Tigers (18-6, 6-5 SEC) saw a 17-point third-quarter lead evaporate as Arkansas’ Chelsea Dungee scored 41 points – 32 of them in the second half – but got two late defensive stops and made clutch free throws to hold on.

Daisa Alexander led AU with 18 points, while Unique Thompson had 13 and grabbed 12 rebounds.

Senior Meme Jackson went five of eight from behind the arc and a perfect 6-of-6 from the line to lead Tennessee in scoring with 27 points. Sophomore Rennia Davis managed her fourth double-double of the season with 21 points and a career-high tying 14 rebounds. Zaay Green also found her way into double digits with 10 points.

AU’s Unique Thompson posted a double-double with 19 points and 12 rebounds.

Senior Jaime Nared recorded a double-double with 19 points and 11 rebounds to lead No. 7/7 Tennessee to a 70-59 victory over Auburn on January 4th, 2018, in Knoxville. The win snapped a seven-game win streak for the Tigers and moved Tennessee to 14-0 for only the fifth time in school history.

Daisa Alexander paced Auburn in scoring with 16 points, while Tiffany Lewis and Janiah McKay each contributed 10.

After a largely back-and-forth affair that included 16 lead changes, the Lady Vols ended the game on a 19-4 run, and overcome a season-high 28 turnovers to earn the win.


Coming Up For Tennessee Lady Vols

Tennessee hits the road again this weekend, playing at Missouri on Sunday. Tip is slated for 4:00pm CT (5:00pm ET) in a game that will be carried by ESPN2.