The kickoff is scheduled for noon CDT on Sunday, September 12th, 2021.

This is the first time the Titans and Cardinals organizations have faced each other on Kickoff Weekend. The Titans are 32-29 all-time in openers, including a current two-game win streak. They scored road victories to open the 2019 season at the Cleveland Browns and the 2020 campaign at the Denver Broncos.

Additionally, this week’s opener is the Titans’ first regular-season game since December 22nd, 2019 in front of their home crowd without any pandemic-related restrictions on attendance. From that date to this Sunday, 630 days will have elapsed.

Fans in the Nashville television market can live stream the broadcast on their mobile devices from the Titans Mobile App (iOS and Android), as well as on desktop computers and mobile web at TennesseeTitans.com. Restrictions apply. For more information on streaming options visit TennesseeTitans.com or NFL.com/ways-to-watch.

The Titans Radio Network and Nashville flagship 104.5 The Zone will carry the game across the Mid-South with the “Voice of the Titans” Mike Keith, analyst Dave McGinnis, sideline reporter Amie Wells, and gameday host Rhett Bryan.

Executive vice president/general manager Jon Robinson and head coach Mike Vrabel lead the team into 2021 as it looks to defend its AFC South division title and return to the playoffs for the third consecutive season. Robinson can become the only general manager in franchise history to begin his tenure with six consecutive winning seasons, while Vrabel can become just the third head coach in team annals to earn a playoff berth in three of his first four years on the job.

In 2020, the Titans finished with an 11-5 record to claim their first division title since 2008. They extended their streak to five consecutive winning seasons under Robinson, who was hired by controlling owner Amy Adams Strunk in 2016. The Titans, Seattle Seahawks, and Kansas City Chiefs were the only NFL teams to finish above .500 in each season from 2016 to 2020.

The Tennessee Titans return an experienced offensive nucleus for the 2021 campaign, including quarterback Ryan Tannehill, who set a franchise record with 40 combined passing and rushing touchdowns in 2020; 2,000-yard running back, 2020 NFL Offensive Player of the Year, and two-time NFL rushing champion Derrick Henry; and wideout A.J. Brown, who reached the 1,000-yard receiving mark in each of his first two seasons. NFL Pro Bowl left tackle Taylor Lewan anchors an offensive line that could have four of the five starters in place that it had in Week 1 of 2020.


On defense, Pro Bowl safety Kevin Byard is among the veteran leaders set to return, as is defensive tackle Jeffery Simmons, outside linebacker Harold Landry III and inside linebackers Rashaan Evans and Jayon Brown.

Several new additions could make their Titans debuts against the Cardinals. Wide receiver Julio Jones was acquired from Atlanta in an offseason trade, joining a crop of free agents made up of fellow wide receiver Josh Reynolds, outside linebacker Bud Dupree, defensive lineman Denico Autry, and cornerback Jackrabbit Jenkins. 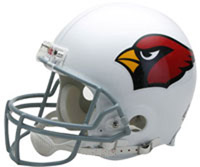 Arizona, which makes its third regular-season appearance at Nissan Stadium and its first since 2013, launches its third year under head coach Kliff Kingsbury. He directed the club to an 8-8 finish in 2020, a five-win improvement from the season before he took the job.

Kingsbury’s arrival coincided with the drafting of Kyler Murray, the first-overall draft pick in 2019. Murray won the 2019 NFL Rookie of the Year Award, and in 2020, he passed for 3,971 yards and 26 touchdowns with an additional 11 rushing touchdowns.