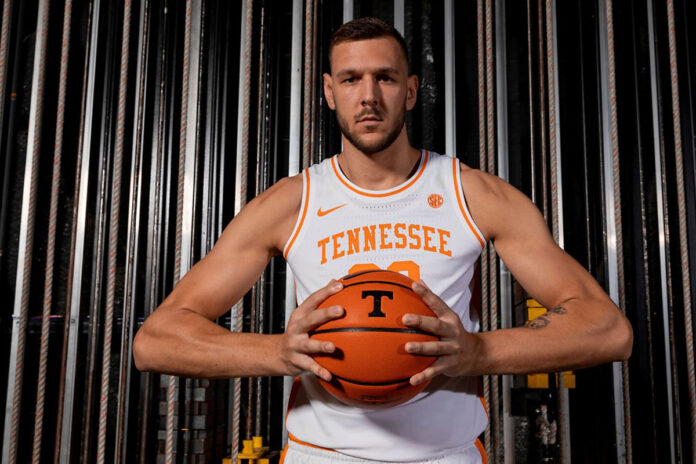 Knoxville, TN – The 24th-ranked Tennessee men’s basketball team hits the road for a second consecutive game, traveling to the state’s capital to take on Vanderbilt Tuesday at 8:00pm CT.

Fans can catch Tuesday’s game on SEC Network and online or on any mobile device through WatchESPN. WatchESPN can be accessed through the ESPN App, or online at espn.com/watch. Tom Hart (play-by-play), Dane Bradshaw (analysis) and Alyssa Lang (reporter) will have the call.

Fans can also listen live on their local Vol Network affiliate to hear Bob Kesling and Bert Bertelkamp calling the action. The broadcast is also available on channel 138 on Sirius, channel 190 on SiriusXM and channel 961 on the SiriusXM app.

Tennessee (11-5, 2-3 SEC) fell on the road to No. 18 Kentucky on Saturday, 107-79. Despite defensive deficiencies, Tennessee shot 53 percent from the floor. Junior Santiago Vescovi led the Vols with 20 points on 7-for-10 shooting, while Kennedy Chandler had 17. Josiah-Jordan James and Brandon Huntley-Hatfield also scored in double figures with 11 points apiece.

Tuesday marks Tennessee’s 14th meeting with Vanderbilt during the Rick Barnes era. The Vols have posted a 10-3 record against the Commodores since Barnes arrived in Knoxville, including win each of the last eight meetings. No player on Tennessee’s current roster has ever lost a game at Vanderbilt’s Memorial Gymnasium.

Tennessee has won 10 of the last 11 meetings in this series, including each of the last eight and five straight at Memorial Gym.

No active Vol has ever lost a game at Vanderbilt’s Memorial Gymnasium.

During the Barnes era, Tennessee has held Vanderbilt to an average of 67.8 points per game (881 points in 13 games).

In Rick Barnes‘ first season as the head coach at Clemson (1994-95), his Tigers faced North Carolina—led by first-team All-American Jerry Stackhouse—three times. Stackhouse and the Tar Heels won all three meetings on their way to the Final Four.

Three of the last five times the Vols traveled to Nashville, they returned home without playing.

According to KenPom, the Vols rank fifth in the nation in adjusted defensive efficiency, allowing only 89.1 points per 100 possessions.

The Vols are forcing an average of 18.6 turnovers per game during SEC play. The next-closest SEC team (LSU) forces 16.8 per game.

Four of the five teams that have beaten UT this season are ranked in this week’s AP Top 25.
Tennessee is shooting just .568 (46-81) from the free-throw line over its last four games.

Vescovi’s 3.2 3-point makes per game during SEC play ranks second in the league.
Josiah-Jordan James is 5-for-10 from 3-point range over UT’s last two games while averaging 11.0 points and 8.0 rebounds.

Chandler’s 3.0 steals per game during SEC play is tied for the league lead.

The SEC record for career games played is 152, held by Kentucky’s Darius Miller (2008-12). John Fulkerson is closing in, having now appeared in a Tennessee-record 146 career games.

Fulkerson also is just eight points shy of 1,000 for his career.

Vanderbilt (10-6, 2-2 SEC) enters Tuesday’s game coming off of its second conference win. The Commodores won at Georgia on Saturday, 73-66.

The Commodores won just three SEC games during the entire 2020-21 season and have already won two of their first four conference games this season.

Five of Vanderbilt’s six losses this season have come at Memorial Gymnasium.

Pippen Jr. has also been very effective at getting to the free-throw line this season. He ranks 10th in Division I and leads the SEC with 105 free throw attempts. He also leads all SEC players with 76 made free throws.

Vanderbilt ranks 26th in Division I and fourth in the SEC in turnovers forced with 16.4 forced per game. The Commodores have forced 15 or more turnovers in 10 games this season.

20-point scoring outputs from Victor Bailey Jr. and Jaden Springer, along with a double-double from senior Yves Pons, pushed the No. 25 Tennessee basketball team past Vanderbilt, 70-58, on February 24th, 2021, inside Memorial Gym.

The win was Tennessee’s eighth consecutive victory over Vanderbilt and UT’s fifth straight in the Commodores’ home gym.


The Vols were led by Bailey Jr., who poured in 21 points on 7-of-14 shooting and 5-of-8 from 3-point range. He added three rebounds and three assists.

Springer scored 20 points of his own, marking his fifth 20-point performance of the season. He finished the night 5-of-8 from the field and was a stellar 10-of-10 from the free-throw line. Springer also had three steals, a pair of assists, and a block.

Pons scored an even 10 points and grabbed 10 huge rebounds for his third career double-double.

The opening half was defined by runs, as each team had a spurt during which it outscored the opponent by at least 10 points.

Out of the break, UT extended its run to 22-5 through the first four minutes of the second half, increasing its lead to 39-25 at the under-16 break.

The Vols held an advantage as large as 15 points in the second half, but Vanderbilt refused to go away, trimming Tennessee’s lead to as few as four points down the stretch.

Memorable Vol Performances Against The Commodores

Grant Williams (now with the Boston Celtics) erupted for a record-setting performance as the No. 1-ranked Volunteers held off Vanderbilt, 88-83, in overtime in Nashville on January 23rd, 2019. Williams finished with a career-high 43 points and also tallied eight rebounds, four blocks, two assists and a steal. The junior forward was 10-of-15 from the field and a program-record 23-of-23 from the free-throw line.

Josh Richardson (now with the Boston Celtics) helped the Vols rally from two separate double-digit deficits in the second half by scoring 15 of his game-high 22 points in the final stanza to lift Tennessee to a 67-61 comeback win over Vanderbilt in the 2015 SEC Tournament in Nashville on March 12th, 2015. In what was the second-to-last game of his career, Richardson also led all players with three steals and was a perfect 6-for-6 from the foul line.

Tennessee Successful On The In In-State Circuit

Tennessee has won its last eight games against in-state opponents and is 23-5 vs. in-state foes under coach Rick Barnes.

With 46 made 3-pointers so far this season, Santiago Vescovi is on pace to finish the season with the seventh-most made threes in program history (89).

Tennessee is guaranteed to play at least 15 more games this season (14 regular season, one SEC Tournament), and Vescovi is averaging 2.9 made threes per game.

Vescovi made a career-best 53 3-pointers in 27 games last season. He’s already made 46 through 16 games this season.

KC and Santi A Dangerous Duo

Chandler and/or Vescovi have led or shared the team lead in scoring in eight of UT’s 16 games.

Thanks to earning an enhanced role during the first five games of SEC play, Plavsic is now averaging career-bests in minutes (11.4 mpg), scoring (3.7 ppg), rebounding (2.9 RPG), and field-goal percentage (.556).

And his 46 rebounds through 16 games are more than his total through his first two seasons (32).

After capping its current two-game stretch of road games, the Tennessee men’s basketball team returns to Thompson-Boling Arena on Saturday for a rematch with No. 13 LSU. Tip-off is set for 5:00pm CT on ESPN.