The Lady Govs have begun the season with a three-match winning streak for the third time in the last four seasons, outscoring Chattanooga, Appalachian State and Arkansas-Little Rock, 9-1 – with a pair of wins against Western Kentucky and Lipscomb, the Lady Govs would tie the program-best 5-0 start achieved during the 2010 season.

With a league-high five goals and 11 points, senior Tatiana Ariza is on pace to eclipse the Ohio Valley Conference’s career (149) and single-season (49) point marks.

Sophomore Nikki Filippone and freshman Katie Emig have continued to split time in net through the season’s first two weekends. Filippone has seven saves and has yet to give up a goal in 181 minutes of action.

Western Kentucky (1-1-1) has steadily improved as the season has progressed. The Hilltoppers lost the opener against Utah before salvaging a tie against Rice and getting their season’s first victory against Indiana State, September 1st. Senior keeper Nora Abolins has allowed just three goals in three matches, making eight saves along the way, earning Sun Belt Conference Defensive Player of the Week last week. 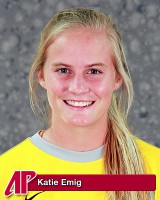 Austin Peay was unable to get anything past the Lipscomb defense in 2012, dropping a 1-0 decision, August 28th, despite attempting 15 shots. The Lady Govs last faced Western Kentucky in  the regular season in 2011, falling 3-1 at Morgan Brothers Field. Then-sophomore Joceline Quiceno netted Austin Peay’s lone goal against the Hilltoppers.

Be sure to follow all the Lady Govs action at www.LetsGoPeay.com, and check them out on Twitter (@AustinPeaySocr) and by liking the Austin Peay Women’s Soccer Official Page on Facebook. Live stats will be available prior to the match at LetsGoPeay.com.