The game will be televised regionally on FOX, including Nashville affiliate WZTV FOX 17. Thom Brennaman will handle play-by-play duties, and David Diehl will serve as analyst. Laura Okmin will report from the sidelines.

The Titans have four games in December to conclude their 2014 season, with three of the remaining contests to be played at home. They welcome the New York Jets to LP Field a week after hosting the Giants, followed by a trip to the Jacksonville Jaguars for a Thursday night matchup with the Jaguars. The season concludes at home versus the Indianapolis Colts.

Last week, the Titans traveled to Houston to face the AFC South rival Texans. They fell behind 24-0 in the first half and were never able to catch up, ultimately losing by a final score of 45-21. It was their sixth consecutive loss.

Rookie quarterback Zach Mettenberger recorded his fifth career start but was unable to finish the contest. Through two-and-a-half quarters, he completed 13 of 19 passes for 184 yards, a touchdown and an interception. However, he was taken to the turf by J.J. Watt in the third quarter and suffered a right shoulder injury, ending his day.

Mettenberger’s season passing totals stand at 93-of-155 for 1,287 yards, eight touchdowns and six interceptions. His 87.8 passer rating leads the four NFL rookie quarterbacks who have recorded at least one start this season, ahead of the Minnesota Vikings’ Teddy Bridgewater (79.0), Oakland Raiders’ Derek Carr (74.4) and Jacksonville Jaguars’ Blake Bortles (72.2).

When Mettenberger left the game, Jake Locker entered to see his first action since October 5th. The Texans maintained their control of the scoreboard with Locker in the game, victimizing the fourth-year signal caller on two interceptions. Locker did manage to complete a touchdown pass to Nate Washington, who reached career milestones of 400 receptions and 40 touchdown catches.

Kendall Wright had the biggest day among Titans receivers, hauling in seven passes for 132 yards. He also became the only player for the franchise other than Ernest Givins to reach 50 receptions in each of his first three NFL seasons.

The Titans offensive line was beset by injuries last week. The unit arrived in Houston down three starters from the previous week at the Philadelphia Eagles: left tackle Taylor Lewan (inactive with an ankle injury), center Brian Schwenke (injured reserve/knee) and right tackle Michael Oher (did not play/toe). Will Svitek, Chris Spencer and Byron Stingily started in those spots, respectively. Then during the third quarter, right guard Chance Warmack went down briefly with an ankle injury and was replaced by the newly-signed Eric Olsen. 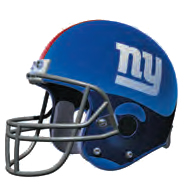 Having lost seven consecutive games, the Giants are tied with the Washington Redskins for third place in the NFC East. Last week they traveled to another AFC South opponent, the Jacksonville Jaguars, and fell by a final score of 25-24. The Giants built a 21-0 lead in the first half, only to see the Jaguars storm back and ultimately win on a 43-yard field goal with less than a minute remaining in the fourth quarter.

Tom Coughlin is in his 11th season as head coach of the Giants and his 19th NFL season as a head coach. The two-time Super Bowl Champion is second in Giants history for career wins by a head coach, trailing only Steve Owen.

Giants quarterback Eli Manning was 24-of-34 passing for 247 yards and a touchdown against the Jaguars. The 11th-year veteran reached the 3,000-yard passing mark for the 10th consecutive season in the loss. With more than 38,000 career passing yards, he is the franchise’s all-time leader in every major passing category. Additionally, his 163 consecutive starts make up the third-longest streak by a quarterback in NFL history, behind Brett Favre and Peyton Manning.

Titans-Giants Series At A Glance

S Michael Griffin (785 career tackles) needs four tackles to move past Blaine Bishop (788) for the most tackles by a safety in franchise history.

QB Zach Mettenberger can become the first Titans rookie quarterback to win a game as a starter since Vince Young in 2006.

QB Zach Mettenberger can become the third quarterback in franchise history to start at least six games as a rookie, joining Dan Pastorini (eight in 1971), and Vince Young (13 in 2006).

QB Zach Mettenberger could pass for at least one touchdown for the sixth time in six NFL starts.

WR Nate Washington needs four receptions to become the ninth player to reach 300 receptions as a member of the Titans/Oilers franchise.

LB Wesley Woodyard is scheduled to play in his 100th career regular-season game.

This week’s game marks the 11th meeting between the Titans and Giants. The series is tied 5-5, dating back to September 16th, 1973, when the Giants defeated the Houston Oilers 34-14 in the season opener at Yankee Stadium.

Of all opponents that have been in existence since the 1970 AFL-NFL merger, the Giants, Arizona Cardinals and Tampa Bay Buccaneers have played the Oilers/Titans the fewest amount of times—10 games each.

The win over the Giants in 2000 was against a team that would eventually win the NFC Championship and play in Super Bowl XXXV. Steve McNair passed for three touchdowns and Eddie George rushed for 125 yards and one touchdown on 35 carries as the Titans held the ball for more than 42 minutes in the game.

On a cold and windy day at the Meadowlands in 2002, McNair helped force overtime with a touchdown pass and a two-point conversion in the final seconds of regulation, and Joe Nedney sealed the win when he connected on a 38-yard field goal. George rushed for 64 yards to pass Earl Campbell as the all-time rushing leader in franchise history.

The 2010 matchup marked the first-ever Titans-Giants game at MetLife Stadium. The Titans defense forced three turnovers, while Chris Johnson rushed for 125 yards and two touchdowns on 32 carries to help the Titans to a 29-10 victory.

In Week 3 of the 2010 season, the Titans used 19 unanswered second half points and forced crucial turnovers to pull away for a 29-10 victory over the Giants at MetLife Stadium (then New Meadowlands Stadium).

While the Giants won many of the statistical battles, the Titans came up with the majority of key plays at pivotal moments. The Giants outgained the Titans by 200 yards (471 to 271), but the Titans intercepted two passes and recovered a Giants fumble to keep their opponents at bay. Two of the Titans’ takeaways came when they were backed up near their own end zone. The Giants contributed to their own woes with 11 penalties.

The Titans got on the scoreboard first. On the Giants’ first offensive series, Sen’Derrick Marks intercepted an Eli Manning pass that was intended for Hakeem Nicks. After the ball bounced off the hands of Nicks and cornerback Cortland Finnegan, Marks corralled it at the Tennessee 49-yard line. Rob Bironas gave the Titans a 3-0 lead with a 48-yard field goal.

A 54-yard pass from Manning to tight end Kevin Boss put the Giants in scoring position. However, on third-and-goal, Manning’s attempted pass to Boss was tipped by linebacker Will Witherspoon and then intercepted in the end zone by cornerback Jason McCourty.

After Lawrence Tynes missed a 53-yard field goal early in the second quarter for the Giants, the Titans mounted a 10-play, 57-yard touchdown drive. Chris Johnson capped the series with a one-yard touchdown run to give the Titans a 10-0 lead.

The Giants responded with 10 unanswered points to tie the game near the end the first half. First, an an eight-play, 38-yard drive ended with a 50-yard field goal by Tynes. Then, after a Titans punt, the Giants began a drive on their own 37-yard line with less than three minutes on the clock.

Manning directed the offense down the field, and with 36 seconds remaining in the half, Ahmad Bradshaw ran into the end zone for a 10-yard touchdown. It would be the Giants’ final score of the afternoon.

In the third quarter, a 45-yard kickoff return by Marc Mariani did not directly produced points, but it led to Michael Griffin downing a punt at New York’s one-yard line. Three plays later, Manning completed a 43-yard reception to Mario Manningham, but on the play, Bradshaw was called for a chop block on Tony Brown in the end zone, negating the gain and resulting in a safety.

On the ensuing drive, the Titans drove 51 yards on six plays, including four completed passes by Vince Young totaling 48 yards. His 13-yard touchdown pass to Kenny Britt in the back of the end zone gave the Titans a 19-10 lead.

The Giants then moved the ball down the field, helped by runs by Bradshaw of 22 and 20 yards. However, on first-and-goal from the six yard line, Bradshaw was stripped of the ball by safety Michael Griffin, and cornerback Alterraun Verner recovered at the five-yard line for Tennessee.

Tynes missed a 44-yard field goal early in the fourth quarter that would have made it a one-score game, and the Titans responded with a 12-play, 46-yard drive that used more than five minutes of the clock. Bironas’ 22-yard field goal gave the Titans a 22-10 lead.

Later in the fourth quarter, Johnson recorded a 42-yard carry and an eight-yard touchdown run three plays later to conclude the scoring. Johnson finished the game with 32 rushing attempts for 125 yards.