The third game of a five-game homestand, the Governors are seeking to snap a two-game losing streak. 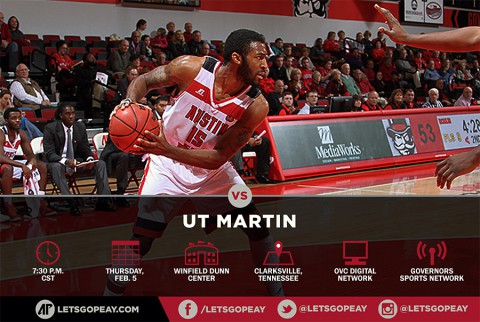 APSU is coming off a pair of weekend losses to Morehead State and Southeast Missouri, the latest Saturday by 70-64. It dropped to 2-6 in OVC play and 7-15 overall.

The Govs struggles have occurred despite one of the best stretches by a Gov in recent history. Junior center Chris Horton has rolled off five straight double-doubles—he scored 23 points in each of APSU’s weekend losses. He has also grabbed a career-best 18 rebounds in the loss against Southeast Missouri, despite not grabbing his first rebound until 9:50 was left in the first half. Horton had 11 offensive rebounds in the contest.

If Eastern Illinois is the surprise team in the OVC this season at 7-3 and second place in the OVC West, then UT Martin is not far behind in catching experts off guard in 2014-15. The Skyhawks were picked to finish sixth in the OVC West and find themselves in third place at 5-3 in the OVC and 13-8 overall.

Guard Marshun Newell is one of the returnees who has flourished in 2014-15. He is averaging 12.5 points, shooting 41 percent from three-point range, along with 6.2 rebounds per outing.

UTM will look to bounce back after a 65-62 loss at OVC leader Murray State last Saturday. In the contest, UT Martin rallied from an 11-point halftime deficit to tie the game with 5:00 remaining. However, the Racers scored five of the final seven points in the final minute to hold on for the win.

The Series: This is the 96th meeting between Austin Peay and UT Martin, a pair of Ohio Valley Conference West foes who also competed as junior colleges and later members of the VSAC before eventually landing in the OVC. The Governors lead the series, 70-25. The Govs have won the last three contests, including both games a year ago–an 81-68 victory in Clarksville, January 2nd, 2014, and 88-85, March 1st, 2014 in Martin.