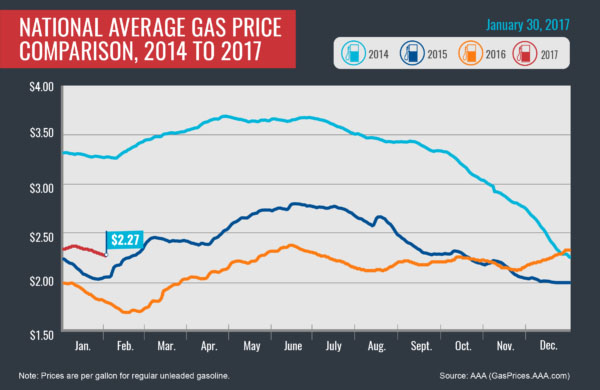 Tampa, FL – Continual growth in the number of U.S. oil rigs and the increased drilling it implies are raising expectations for a climb in domestic oil production. Additionally, increased U.S. crude oil production coupled with lower driving demand has kept downward pressure on the national average price at the pump, which has fallen for 21 consecutive days.

Today’s national average price for regular unleaded gasoline is $2.27 per gallon, down four cents versus one week ago, five cents less than one month ago, but 47 cents more per gallon year-over-year. 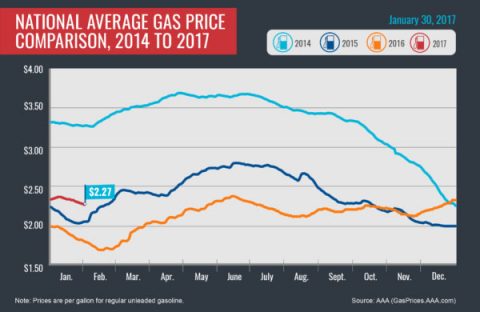 Gas prices on the West Coast continue to be the highest in the country, with every state in the region landing on the top ten list of most expensive markets: Hawaii ($3.07), California ($2.80), Alaska ($2.74), Washington ($2.73), Oregon ($2.52) and Nevada ($2.47). Prices have been relatively steady over the past week despite reports of growing gasoline production and supply in the California market.

Pump prices in the Rocky Mountains have remained steady, moving +/- 2 cents or less in most of the region. Prices are expected to follow the national average decrease this week due to suppliers in most parts of the region dropping prices to help move product.

These discounts are most prevalent in Wyoming, where commercial and consumer demand typically drop significantly in midwinter.

Prices for drivers in the Central part of the country remain flat despite the shutdown of the Magellan Pipeline last Wednesday. A leak was discovered on a section of the pipeline in Worth County, Iowa. OPIS reports that Magellan resumed operations on the pipeline between Rosemount, Minnesota, and Mason City, Iowa, on Saturday after “repairs to the damaged section of pipeline were safely completed.” This week Missouri ($2.10) and Oklahoma ($2.11) both appear on the top 10 list of least expensive markets.

Prices in the Mid-Atlantic and Northeast followed the national average down this week. Wells Fargo attributes the region’s significantly low demand over the past month to higher than normal rainfall levels, which kept drivers off the road. This includes some of the most densely populated areas along the East Coast. The latest U.S. Energy Information Administration report shows that regional gasoline supply increased by 0.9 million bbl last week, to a total of 71.6 million bbl.

Barring any unexpected impact to production or distribution, prices in the region should continue to drop this week due to low demand and healthy supply. Despite recent drops, Pennsylvania ($2.57), Washington D.C. ($2.52), New York ($2.50) and Connecticut ($2.44) all landed on the list of most expensive markets for the week.

Pump prices continue to move down in the South and Southeast, with the regions featuring five of the ten cheapest states in the nation: South Carolina ($2.04), Alabama ($2.07), Mississippi ($2.08), Texas ($2.10) and Arkansas ($2.11). The Gulf Coast is home to the bulk of U.S. refining capacity, which helps to keep prices low.

Ample supply tied to low demand should keep regional prices down until the seasonal switch to the production of more costly summer-blend gasoline this spring.

Market watchers will also keep a close eye on U.S. production and the impact it has on supply and demand. At the closing of Friday’s formal trading session on the NYMEX, WTI was down 61 cents to settle at $53.17 per barrel.