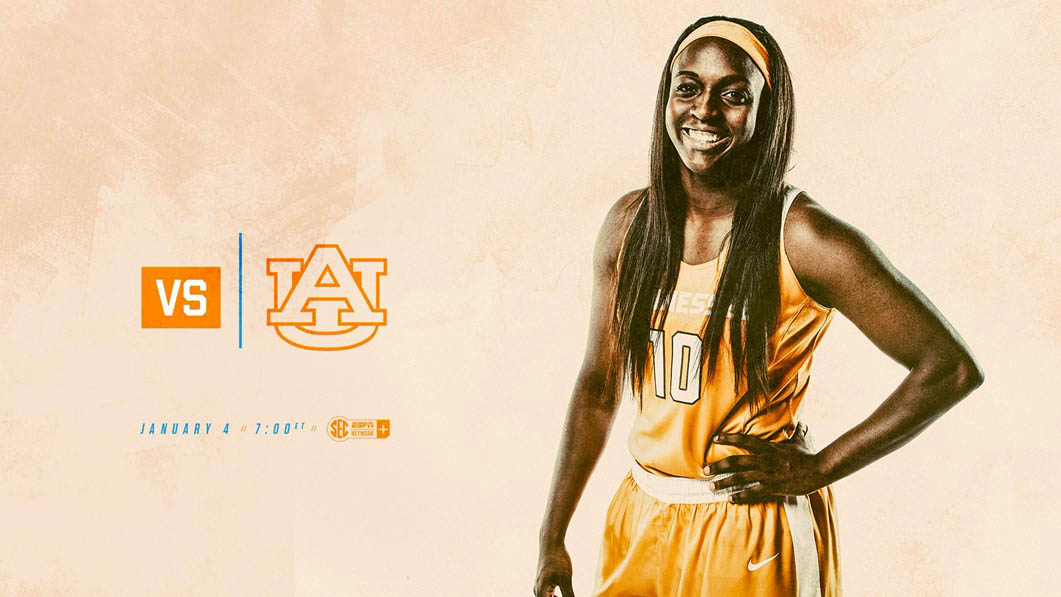 The last time the Lady Vols appeared in a game on The Summitt, Holly Warlick‘s squad upended #2/4 Texas, 82-75, on December 10th. 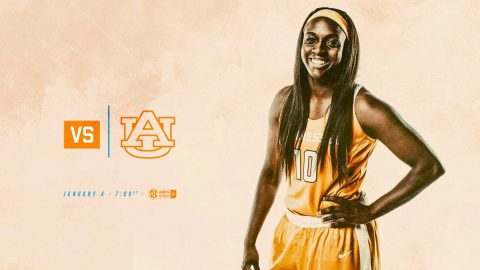 The Lady Vols will be aiming to go 14-0 for only the fifth occasion in school history and for the first time during the Holly Warlick era.

The last time Tennessee began a season 14-0, the Lady Vols extended the streak to 18 games before finally falling during the 2005-06 season en route to a 31-5 overall record an Elite Eight finish.

The Tigers stood 3-3 on November 26th after losing to Chattanooga, 50-41, in Nashville at the Challenge in Music City, but they have bounced back in strong fashion, going 5-0 at home and 2-0 on the road since that date.

Thursday is Youth Sports Night. For more information on how to bring your youth team, contact 865-946-7000.

High five tunnel for the first 50 kids every game! Pick-up a wristband for the tunnel at section 113 on the concourse.

Vanderbilt travels to Knoxville on Sunday to face the Lady Vols at noon. The SEC Network will have the telecast.

During the Holly Warlick era, Tennessee is 61-20 in league games, making Warlick the top-ranked active SEC coach in terms of winning percentage in league play at .753 among coaches with at least one season at a school.

In only her sixth year as a head coach, Warlick already ranks fourth in total league wins among active SEC coaches and has won regular season titles in 2013 and 2015, and a tourney crown in 2014.

The Lady Vols in SEC Openers

With the win over Kentucky on Sunday, Tennessee improved to 30-6 all-time in SEC openers, including 14-3 on the road and 16-3 at home.

UT now has won four straight SEC openers and has triumphed in its last 11 league lid-lifters that were played on the road.

The Lady Vols now are 28-8 all-time in the first SEC game that is played on the road during a season and 31-4 in the first one played at home.

The Lady Vols are 5-1 in SEC openers under Holly Warlick, including 2-1 at home and 3-0 on the road.

UT is one of only four undefeated teams remaining in NCAA Division I basketball. The other squads are Connecticut, Louisville and Mississippi State.

Tennessee opened league play with a 14-point win at Kentucky, UT’s biggest margin of victory over the Cats in Lexington since 2008.

UK’s 49 points in Lexington were the fewest points Tennessee has allowed an SEC opponent on that team’s home court since holding Ole Miss to 49 in Oxford on February 12th, 2015.

UT has led every game this season at the half and has owned a double-digit advantage at the intermission in 10 of 13 contests (Marquette, Texas and Wichita State are the exceptions).

In Lady Vol history, the previous long streak for the same starting five reached 11 games in 2007-08, when Pat Summitt chose the same lineup of Candace Parker, Angie Bjorklund, Nicky Anosike, Shannon Bobbitt and Alexis Hornbuckle to report for the opening tip. UT went 10-1 in that span and went on to win the NCAA title with a 34-3 record and the SEC title with a 14-0 mark. In game 12, in the team’s visit to Chicago, Parker missed curfew and didn’t get the starting nod vs. DePaul on January 2nd, 2008.

UT has four players averaging double figures in scoring, including seniors Jaime Nared (17.4) and Mercedes Russell (16.4), and freshmen Rennia Davis (11.8) and Anastasia Hayes (11.7). Another first-year performer, Evina Westbrook, is knocking on the door at 9.8 ppg.

Russell and Nared have led Tennessee in scoring five times each, while Hayes has done so twice, and Davis, Meme Jackson and Evina Westbrook once each.

Russell has scored in double figures in every game, while Nared has done so 11 times, Hayes 10 times, and Davis and Westbrook on seven and six occasions, respectively.

Tennessee has outscored its opponents in the points-in-the-paint category in 11 of 13 games, averaging a 42.9 to 29.5 difference.

Nared has tallied double-doubles in three of her last four games.

Westbrook has scored 15, 14, 17 and 17 points during that span, her longest streak of double-figures scoring this season.

Reserve guard Anastasia Hayes has hit 54 percent of her field goal attempts (13-24) and 77 percent of free throws (13 of 17) over the past four outings.

Tennessee has outscored its opponents 85 to 35 at the free throw line, getting 58 more shots there the past four contests (111-53). UT has hit at a 77 percent clip.

Meme Jackson is seven of 15 (46.7 percent) from the three-point arc over her last four games and has recorded a team-low four turnovers among regulars during that time frame.

Tennessee has outscored opponents 92-48 in the first quarter over the past four contests.

The team is No. 2 nationally in defensive rebounds per game, grabbing 35.

The Big Orange women have won the battle of the boards in every game but one (Stanford), forging a +12.7 advantage on the glass that ranks No. 6 nationally.

The squad from Rocky Top has shot a higher percentage than 12 of 13 opponents (not Marquette) and stands at 47.6 for the season. That rate ranks Tennessee No. 16 nationally and third in the SEC.

Mercedes Russell continues to shoot at an very high percentage, connecting on 63.8 percent of her shots (88 of 138). She ranks No. 9 nationally and second in the SEC.

That per game average would rank fourth best in UT annals if the season ended today.

The Lady Vols are shooting 47.6 from the field this season, ranking No. 16 nationally, and holding opponents to .336, which is ninth.

Getting Off To A Great Start

Tennessee has made a habit of getting off to great starts. A 308-162 first quarter tally over opponents backs that up.

Holly Warlick‘s squad surged to a 21-9 first quarter lead over Stanford en route to a 23-14 edge after the opening 10 minutes.

The Lady Vols bolted to a 12-0 advantage against Troy, leading to a 34-15 first quarter score vs. the Trojans.

UT started the previous game 12-0 vs. Alabama State en route to a 30-12 first quarter, followed by a 31-14 second stanza on Dec. 3. The 31 was (then) the fourth-highest point total in a quarter in school history.

The Big Orange posted a 22-8 first quarter vs. Central Arkansas.

The Big Orange burst out to a 7-0 advantage over South Dakota en route to a 24-9 first quarter.

Tennessee has won in 13 of its last 15 trips to The Plains.

Tennessee has limited Auburn to 66 points or fewer in nine of the last 10 times they’ve met and to 61 or less on seven of those occasions.

Chamique Holdsclaw scored a career-high 39 points vs. the Tigers on Feb. 14, 1998, marking the sixth-highest point total in Lady Vol history.

UT and AU four times played for SEC Tournament titles from 1985 to 1990, with the Lady Vols winning three of those.

The Last Meeting Between UT & AU

Mercedes Russell scored a career-high 26 points and logged her 11th double-double of the season, but Tennessee fell to Auburn, 79-61, on January 19th, 2017, at Auburn Arena.

Russell was 11-of-14 from the floor and collected 11 rebounds. Diamond DeShields was close to pulling off a triple-double, finishing with 17 points, nine rebounds and eight assists. Jaime Nared added 12 points.

Janiah McKay scored a career-high 29 points, including a 3-for-3 effort from 3-point range, to lead Auburn. Katie Frerking added 22 points and seven boards.

Tennessee opened the game with a 14-0 run, holding the Tigers scoreless for the first five minutes of the game. The Lady Vols made five of their first six shots. Russell led the way in the first quarter with 11 points and was a perfect 4-of-4 from the floor as UT took a 25-10 lead to the second. DeShields also had a strong start with eight points and four of UT’s eight assists in the opening quarter.

Auburn responded with a 13-0 run to open the second quarter with McKay accounting for eight points during that stretch. Brandy Montgomery made a layup with 5:30 left in the first half to knot the game at 26-26. Frerking made a 3-pointer from the top of the key at the buzzer to give the Tigers a 38-36 lead at the half.

Diamond DeShields scored 25 points, Bashaara Graves added 18 points and Mercedes Russell posted a double-double to lead No. 12/11 Tennessee to a 79-52 win over Auburn on Jan. 10, 2016, the last time these teams met at Thompson-Boling Arena.

DeShields enjoyed a great all-around game, going 9-of-14 from the floor and contributing seven assists and six rebounds.

Graves scored 14 of her 18 points in the second half and shot an efficient 8-of-9 on the day.

Russell scored 10 points and hauled down 13 rebounds to post her fifth double-double on the year.

Auburn has hit its stride, winning its last seven games in a row, all of them by double digits.

The Tigers are holding opponents to 51.5 points per game and are carding 15.1 steals per game.

AU’s defense is allowing only 46.5 shots.

AU returned nine letterwinners and three starters from last season’s squad, which finished 17-15 overall and 7-9 in the SEC, good for a tie for eighth.

The Tigers earned a berth in the NCAA Tournament, falling to N.C. State in the first round, 62-48.

Auburn was picked 10th by the media and 11th by the coaches in the preseason polls.

Janiah McKay had 25 points, Daisa Alexander had 21, and Auburn outscored Florida 49-19 in the second half to earn an 84-55 win in the SEC opener for both teams Sunday at Auburn Arena.

Auburn tied a school record for fewest turnovers in a game with five and held the SEC’s top 3-point shooting team to just six treys while tying a season high with eight 3-pointers of their own.

Auburn matched its record-high for points in a quarter in an SEC game, outscoring the Gators 30-4 in the final period; Florida made its last field goal with 8:19 to play. From the point where Auburn trailed 18-2 in the first quarter, the Tigers outscored Florida 82-37 over the final 33 minutes.

The victory was UT’s first in the venue in three tries. The Big Orange women lost to the Wildcats during the 2005-06 season and fell to USC here in the 1986 NCAA Final Four semifinals. The triumph was only the third in Tennessee’s last seven trips to the Bluegrass.

Maci Morris was Kentucky’s high-scorer with 18 points. She was the only Wildcat in double figures, as Tennessee held UK to 30.3 percent shooting for the game. The Lady Vols now have held 12 of 13 foes this season under 40 percent from the field (Marquette, .437, is the only one to shoot better than 40 percent).

Evina Westbrook and Meme Jackson set the tone early for the Lady Vols, each knocking down threes for Tennessee’s first two buckets of the game. Kentucky started the game cold, going 0-of-6 from the field.  The Wildcats scored their first points off a Morris jumper with 5:50 remaining in the first quarter to end a 10-0 run by Tennessee.  Jackson and Westbrook combined for three additional treys before the end of the quarter to help build a 19-point lead and head into the second stanza up 26-7.