“Refinery utilization in the United States is at its highest level since early January, resulting in overall gasoline stocks at healthy levels to meet robust summer demand. Prices are dropping due to cheaper crude oil and at the same time U.S. supply is keeping pace with demand,” said Jeanette Casselano, AAA spokesperson.

“The national average is poised to fall to at least $2.70 this week – an indication that pump prices may be even cheaper this summer,” Casselano stated.

For the last three weeks demand has remained relatively robust at 9.4 million b/d.

Meanwhile, gasoline stocks have increased weekly with total inventories at nearly 4 million bbl ahead of the five-year average, according to Energy Information Administration (EIA) data.

On the week, the top five states in the country with the largest declines hail from the Great Lakes and Central region: Ohio (-21 cents), Indiana (-17 cents), Michigan (-15 cents), Illinois (-11 cents), and Kentucky (-10 cents). Joining these five to round out the top 10 list are Wisconsin and Nebraska with eight-cent declines at the pump.

Gas prices dropped alongside a build in gasoline stocks. According to EIA data the region saw inventory build by 300,000 bbl to total 48.1 million bbl, which is below the five-year average of 50.8 million. Refinery utilization slid back a percent to 83% and is the lowest utilization rate for the week ending May 31st among all five regions in the country.

Despite the deficit in stocks and low refinery utilization rate, gas prices are expected to remain stable; though during the summer, some states may see weekly spikes – declines or increases – due to the typical volatility in the region.

A number of states from the Mid-Atlantic and Northeast appear on the top 10 list for largest changes for the week, month and year:

Driving through the region, motorists will find gas prices on average at $2.65 with the most expensive at $2.89 in Pennsylvania, New York and Connecticut. The cheapest price is $2.42 in Tennessee.

Gas price declines this week were supported by a sizeable build in gasoline stocks – nearly 1.9 million bbl, bumping total inventories to 65.1 million bbl. In addition, regional utilization pushed up for a second week to nearly 94%. These moves will help to keep gas prices stable, but more likely will push them cheaper in the month ahead.

Compared to last month, gas prices are cheaper in Utah, Colorado and Idaho by as much as four cents. Conversely, they are more expensive only in Montana (+1 cent) and Wyoming (+8 cents).

The region is poised to see gas prices continue to decline. The EIA reports that regional refinery utilization is at 99% – the highest of any in the country. As utilization jumped so did stocks – by half a million bbl for the week ending May 31st. Total stocks measure at 7.2 million bbl, which is a very healthy level compared to last summer, which mostly saw stocks hover at, but mostly below the 7-million bbl mark.

As refinery utilization held steady on the week, regional stocks drew by 1.8 million bbl and dropped total stocks to 82.8 million bbl. While the draw was large, inventories sit ahead of this time last year and are the largest level for this time of year (early June) on record for the region, per EIA data. Motorists in the region can expect to see even cheaper gas prices throughout the summer. 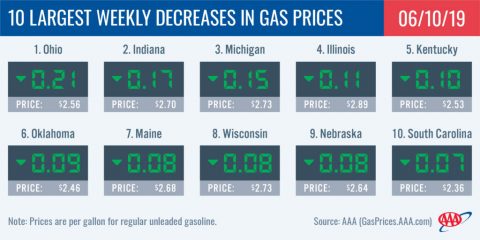 The EIA’s recent report for the week ending on May 31st showed that West Coast gasoline stocks increased by approximately 2.4 million bbl from the previous week and now sit at 30.8 million bbl. The current level is only 300,000 bbl less than last year’s level at this time, which could cause prices to decline further if there are no supply disruptions in the region this week.

At the close of Friday’s formal trading session on the NYMEX, WTI increased by $1.40 to settle at $53.99. Crude prices increased on Friday after Saudi Arabia’s Energy Minister Khalid al-Falih told an audience at a conference in Russia that OPEC and its partners are close to an agreement to extend their current 1.2-million b/d production reduction pact through the end of 2019. The cartel is expected to formally announce its decision at its upcoming meeting in Vienna on June 25th and 26th.

The price increase followed a week of losses for crude due to EIA’s weekly petroleum status report showing that total domestic crude inventories rose by 6.8 million bbl last week. At 483.3 million bbl, the current level is 46.7 million bbl higher than last year’s level at this time.

An oversupply of crude has increased concerns that the market has a glut of oil – even as U.S.-imposed sanctions on Iran and Venezuela have worked to reduce global supply. Market observers will await OPEC’s meeting to determine how much global crude supplies may tighten further. If the glut persists, crude prices will likely continue to descend.

In related news, Baker Hughes, Inc. reported that the U.S. lost 11 oil rigs last week, bringing the total of active rigs to 789. There are 73 fewer oil rigs now than at this time last year.