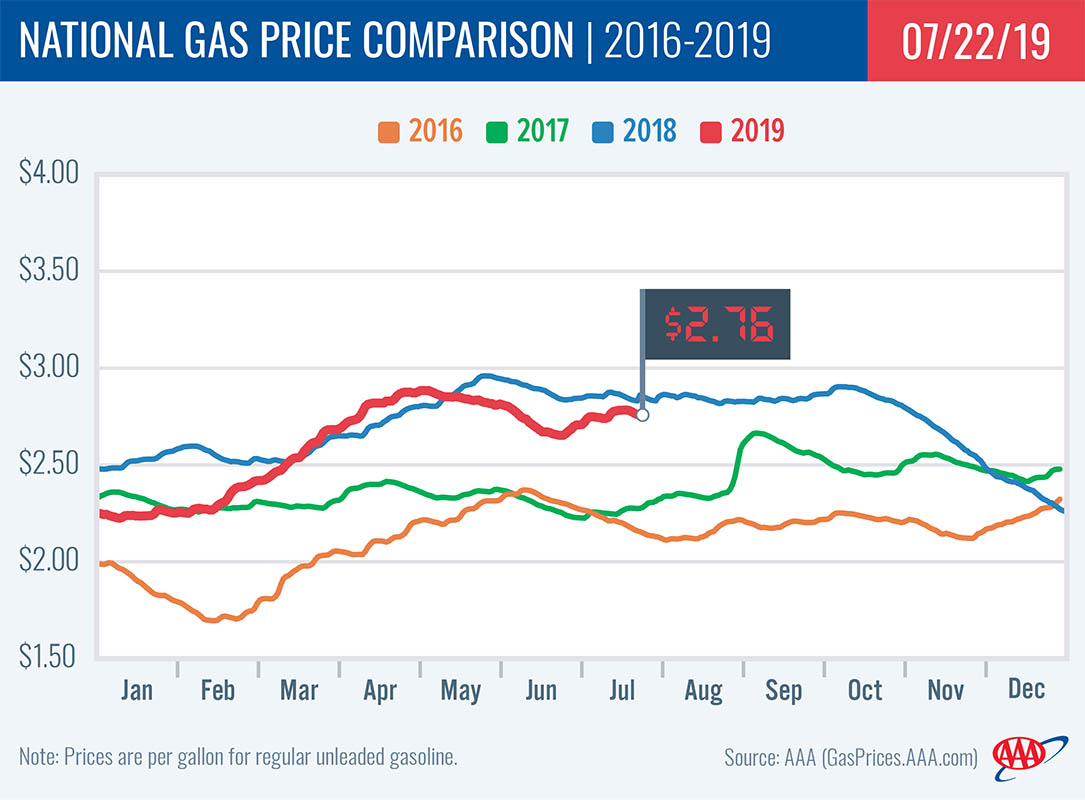 “Gasoline stocks remain robust amid a recent dip in demand, which could be one reason we are seeing pump prices starting to roll back,” said Jeanette Casselano, AAA spokesperson. 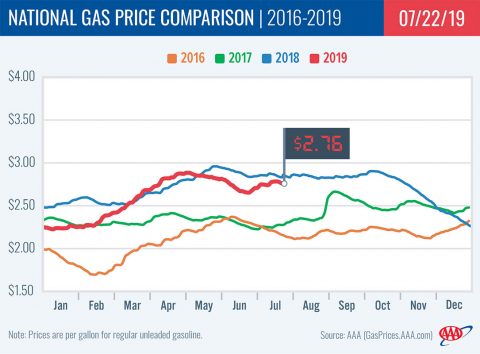 “It is too soon to know if this is a long-term trend, but it is certainly a welcome relief for motorists,” Casselano stated.

Today’s average is a dime more expensive than a month ago, but eight cents cheaper than a year ago.

Regional volatility continues to be a theme among the Great Lakes and Central States despite strong regional refinery utilization and strong gasoline stocks.

On the week, Indiana (-15 cents), Michigan (-12 cents), Illinois (-12 cents) and Ohio (-11 cents) rank as the top four states in the country with the largest declines at the pump and the only to see double-digit dips. Kentucky (-5 cents) and Nebraska (-4 cents) round out the top 10 largest weekly changes list in the region.

While the past seven days brought mostly declines or stability at the pump for the majority of the region, two states saw slight price jumps: North Dakota (+2 cents) and Kansas (+1 cents).

For a third week, the Energy Information Administration (EIA) reports regional refinery utilization at 97% and a small build – 328,000 bbl – in gasoline stocks. Total stocks measure at 50 million bbl, which is about 2.2 million bbl below levels a year ago.

This year-over-year deficit could be contributing to some of the fluctuation in pump prices across the region. However, the overall stock level is strong and keeping most fluctuation moderate. 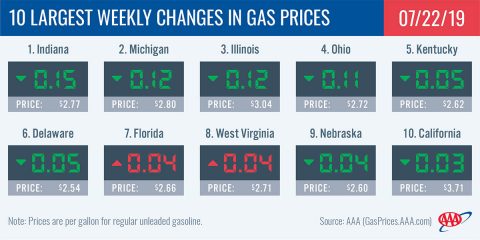 States in the Mid-Atlantic and Northeast region saw pump prices push cheaper or more expensive by as much as a nickel. Two states land on the top 10 list for largest weekly changes: Delaware (-5 cents) and West Virginia (+4 cents).

The latest EIA data reports regional refinery utilization at a steady 69%, and despite the low utilization, stocks built by a little more than 250,000 bbl bringing levels to 59.5 million bbl. The last two weeks of gasoline stock builds, though small, are helping to keep gas prices mostly stable in the region.

Florida (+4 cents) and Texas (+2 cents) were the only states in the region to see jumps at the pump this week. All other states in the South and Southeast region saw pump prices trend cheaper by as much as three cents or remain stable.

Gas prices in the region rank among the top 21 cheapest in the country, with state averages ranging from $2.38 to $2.66. Within the region, motorists can find gas for $2.50 or less at 90% or more of gas stations in Alabama, Arkansas, Louisiana and Mississippi.

Despite Hurricane Barry closing down some operations the week prior, the region added 2 million bbl of gasoline stocks to total 83.8 million bbl. EIA data also shows that regional refinery utilization dropped by a percentage point to 95%. The strong utilization and stock levels poise the region to see gas prices potentially decrease further at the pump in the coming week.

State gas prices in the Rockies are cheaper or stable on the week, month and year with the exception of Montana. At 99%, the region holds the strongest refinery utilization rate in the country. This high rate combined with gasoline stocks at 7.4 million bbl continue to yield cheaper gas prices week-after-week for motorists in the region.

Pump prices in the West Coast region are the highest in the nation, with most states in the region landing on the top 10 most expensive list today. California ($3.71) and Hawaii ($3.65) are the most expensive markets in the country. Washington ($3.31), Nevada ($3.27), Alaska ($3.18) and Oregon ($3.17) follow. Arizona ($2.80) is the only state in the region to fall off the list. Most state averages in the region have decreased on the week, with California, Arizona, Alaska and Oregon seeing the largest declines at three cents each.

The EIA’s recent report for the week ending on July 12 showed that West Coast gasoline stocks grew by approximately 1 million bbl from the previous week and sit at 32 million bbl. The current level is almost 2 million bbl higher than last year at this time, which could help prices stabilize if there is any disruption in supply or gas demand surges in the region this week.

At the close of Friday’s formal trading session on the NYMEX, WTI increased by 33 cents to settle at $55.63. Crude prices mostly declined last week after the International Energy Agency (IEA) announced that it does not expect oil prices to rise significantly because demand is slowing and there is a glut in global crude markets.

The IEA is reducing its 2019 oil demand growth forecast to 1.1 million barrels per day (bpd) from 1.2 million bpd due to a slowing global economy amid the continuing U.S.-China trade dispute. Concerns over the current excess of oil in the crude market overshadowed concerns of increasing tension in the Middle East, following the United States announcing on Thursday that a U.S. Navy ship had “destroyed” an Iranian drone in the Strait of Hormuz.

However, Iran captured a British-flagged oil tanker in the region late on Friday, dramatically escalating tensions. If tension continues to mount, oil prices could spike this week in response to concerns that global supply flows may be disrupted.