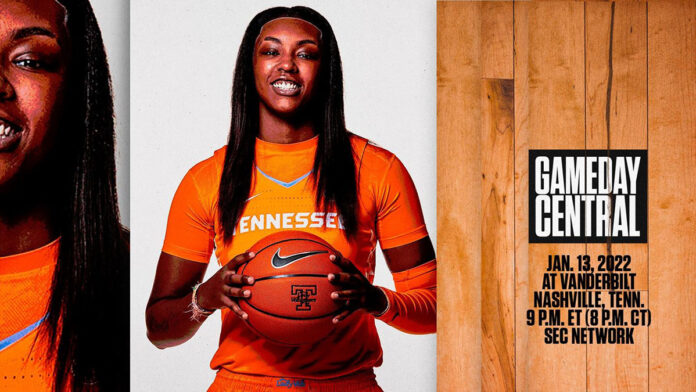 The Lady Vols and Commodores will meet for the 85th time, tipping off at 8:00pm CT (9:00pm ET) at Memorial Gymnasium.

This will mark UT’s highest-ranking entering this game since coming in at No. 4/4 and defeating an unranked Vandy squad, 65-57, in Nashville on February 13th, 2011.

After VU suspended its season three games into the SEC schedule in 2020-21 due to injuries and the spread of COVID-19 Coronavirus, the programs failed to meet on the hardwood for the first time since the 1980-81 campaign. The 2021-22 season brings a brand new look to the rivalry, as former Lady Vol standout Kellie Harper, who is in her third year leading her alma mater, meets first-year Vandy skipper Shea Ralph, a UConn alum, for the very first time as head coaches.

The duo’s careers at UT and UConn overlapped from 1996-97 to 1998-99, with Harper (then known as Kellie Jolly) helping lead UT to the second and third of three-straight NCAA titles in 1997 and 1998, while Ralph contributed to a UConn crown in 1999-2000 after Harper had graduated.  Harper was 4-2 as a player vs. UConn, including 3-1 in games when both were on the rosters of the respective programs.

The former UT point guard leads her team into Thursday’s match-up as the league’s only unbeaten team through four games. The Lady Vols take a six-game winning streak into the contest and enter with a five-game road victory string that began last season on Feb. 25 at Missouri. It’s the longest road spree since UT won five in a row during the 2014-15 season.

UT is coming off Sunday’s 70-58 triumph over Ole Miss in Oxford (13-2/1-1 SEC), in which the Big Orange led by as many as 20 in ending a 13-game Rebel winning streak. It marked the 13th time in 16 games that Tennessee held its opponent to 60 points or fewer, the 16th time no team has shot better than 36 percent from the field and the 15th time in 16 contests UT has out-rebounded its foe.

Vandy is coming off a 70-63 setback at Mississippi State on Sunday in Starkville, during which a 25-17 Bulldog fourth-quarter was the difference in snapping the Commodores’ five-game win streak. A major key to that outcome was MSU turning 20 VU turnovers into 31 points on the afternoon.

Comparing schedules, UT and Vandy have four common foes, with each team defeating Arkansas, Chattanooga, and Tennessee Tech, with the Lady Vols taking care of Kansas (68-58) on November 26th at the South Point Thanksgiving Shootout and the Commodores falling to the Jayhawks in Lawrence, 74-67, on December 5th.

At this time, all attendees at Memorial Gymnasium ages 12 and older will have the option to present either proof of a negative COVID-19 PCR or antigen test administered within 72 hours prior to the event OR proof of full COVID-19 vaccination to enter.


A photo on a cell phone, physical vaccination card or print-out are acceptable forms of verification.

Vanderbilt allows various health apps as proof of a negative test or vaccinations, such as MyHealthAtVanderbilt and the Clear app.

Antibody tests and at-home tests ARE NOT currently acceptable forms of proof.

Currently, children ages 11 years and younger are not required to do so.

Eric Frede (play-by-play) and LVFL Tamika Catchings (analyst) will have the call for the SEC Network broadcast.

The Lady Vols are ranked at season highs of No. 5 and 6 in the January 10th and 11 AP and USA TODAY/WBCA Coaches Polls, respectively.

UT began that season at No. 4 in each poll and stayed there for two more weeks in the AP Top 25 but was relegated to No. 5 in the coach’s poll the following two polling periods.

The NCAA NET Rankings had UT ranked No. 7 through January 10th, while the NCAA Toughest Schedule report had the Lady Vols at No. 14 (cumulative opposition).

RealTimeRPI.com has UT at No. 4 in RPI as of January 10th with a calculation of .7088 and No. 7 in strength of schedule.

ESPN has the Big Orange at No. 3 in its January 10th Women’s College Basketball Power Rankings.

In his Bracketology update on January 7th, ESPN’s Charlie Creme has Tennessee as a No. 2 seed in the Bridgeport Region. The Lady Vols are shown hosting No. 15 Fairfield in the first round, with the winner facing No. 7 Colorado or No. 10 Kansas.

The Tennessee women are 255-61-1 all-time vs. four-year college teams from the Volunteer State, and Kellie Harper is 10-0 in those match-ups in her third season on Rocky Top.

The Lady Vols are 3-0 this season (wins vs. Tennessee Tech, East Tennessee State and Chattanooga) and were 3-0 in 2020-21, with wins over ETSU, Lipscomb and Middle Tennessee, with two games on the schedule vs. Vanderbilt (home and away) canceled.

The Lady Vols are one of the nation’s biggest stories of 2021-22, opening up at 15-1, sitting atop the SEC standings, and climbing to No. 5 in the AP Poll against one of the NCAA’s toughest schedules despite losing returning starter Marta Suárez for the season to injuries and playing without top returning scorer Rae Burrell for 12 games (injury) and this year’s leading scorer and rebounder Jordan Horston for three (injury/illness).

Tennessee picked up its third victory over a ranked team this season on January 6th, as the Lady Vols rolled past No. 25/23 Texas A&M in Knoxville, 73-45. UT, which carded four wins over ranked foes last season, only had one ranked win at that point a year ago.

Key is tied for the team lead with seven double-doubles thus far and has scored in double figures in eight of her last 11 games for the best stretch of her career. She leads the nation in blocked shots (65) and blocks per game (4.06) and is a block shy from entering UT’s single-season top 10 for the third time.

Alexus Dye, a 6-0 forward, is third among active UT players in scoring at 10.3 ppg. She is third in rebounding at 8.1 rpg and has three double-doubles, including a 13/10 effort vs. Arkansas last Sunday. She has scored in double figures in five of the past seven games.

Freshman guard/forward Sara Puckett is UT’s fourth-leading scorer. She is putting up 7.8 ppg. and is shooting 49.5 percent from the field, 36.6 percent on threes, and 77.8 percent on free throws and has scored in double figures five times. She got her first career starts vs. UTC and Alabama during Jordan Horston’s absence because of illness.

Senior Rae Burrell (6.3 ppg.) has seen action the past three games (12/17/12 minutes) after missing the previous 12 contests due to a leg injury suffered in the opener vs. Southern Illinois. During that stretch, she had a best of nine points, three rebounds, and two assists in 17 minutes vs. No. 25/23 Texas A&M on January 6th. She also hit a buzzer-beating three at the end of the first quarter vs. the Aggies.

Sophomore Tess Darby was one of three Lady Vols in double figures vs. Ole Miss, draining three of six three-point attempts and all four free-throw tries to tally a career-best 13 points vs. the Rebels. It was her third game in double figures this season.

Kellie Harper‘s squad is the only remaining undefeated team in league play, standing at 4-0 and joins South Carolina (also 15-1) as the SEC teams with the best overall records.

The Lady Vols have limited foes to shooting only 18.8 percent from the three-point arc, including games vs. noted three-ball teams Arkansas and Texas A&M.

Kellie Harper‘s squad has shown consistent dominance on defense and in rebounding all season. The team is morphing into a much better offensive unit as well.

The Lady Vols’ assists/turnovers numbers were 98/145 the first eight contests and are 149/130 over the past eight.

Looking Back At The Last Game

Junior Jordan Horston was the top scorer for the Lady Vols (15-1, 4-0 SEC), turning in a double-double with 20 points and 11 rebounds. Graduate Alexus Dye was also a top producer with 17, while sophomore Tess Darby scored a career-high 13 points.


Ole Miss (13-2, 1-1 SEC) was led by Shakira Austin who finished with 26 points and nine rebounds. Lashonda Monk was also in double figures with 11.

Tess Darby went three of six from behind the arc against the Rebels. She has now hit 24 treys on the season, nine of which have come during SEC play. She is averaging 35.3 from distance on the season and is shooting 44.4 percent in conference games.

Sophomore Tess Darby went a perfect four of four from the free-throw line against Ole Miss. Prior to this contest she had never shot a free throw in a collegiate game, making her season and career average from the charity stripe 100 percent.

The Rebels entered today’s contest with a field goal percentage of 43.9 percent but were held to just 33.9 percent shooting. The Lady Vols’ defense has kept all 16 opponents at 36 percent shooting or below this season, and through four SEC games Tennessee is holding opponents to just 28.3 percent from the floor.

The UT Lady Vols are 34-1 vs. the Commodores in Knoxville, 30-7 Nashville, and 10-2 at neutral sites, with those being postseason games.

UT has won 12 of the past 13 games in the series and the last six times in Nashville.

Harper was 0-1 vs. VU as head coach at Western Carolina and 1-1 while at NC State.

Vandy has held opponents to 39.1 percent shooting and only 56.6 points per game.

VU entered the year with two returning starters and eight returning letterwinners, but the Commodores shut down their 2020-21 season after beginning the SEC slate 0-3 due to the COVID-19 pandemic as well as a bevy of injuries.

Ralph, a UConn alum, spent 13 seasons on the staff of the Huskies. She also carded five years as an assistant at Pitt from 2003-08 between her playing career and return to Storrs as a coach.

Vanderbilt was outlasted down the stretch by Mississippi State on Sunday, falling 70-63 inside Humphrey Coliseum.

The duo of Demi Washington and Iyana Moore combined for 34 points. Moore led the way for the Commodores with 20 points, while Washington’s third career double-double was highlighted by 14 points and 10 rebounds.

Mississippi State’s Anastasia Hayes led all scorers on the afternoon with 31 points.


When UT and VU Last Met

The teams did not meet during the 2020-21 campaign after Vanderbilt discontinued its season due to the COVID-19 Coronavirus pandemic and injuries.

The Tennessee women’s basketball team will be back in action at home on Sunday, welcoming #19/20 Kentucky to Thompson-Boling Arena for a 2:00pm CT contest on ESPN.

The contest is Tennessee’s “We Back Pat” game as part of the SEC’s week-long initiative to create awareness about the Pat Summitt Foundation and its efforts in the fight against Alzheimer’s disease.