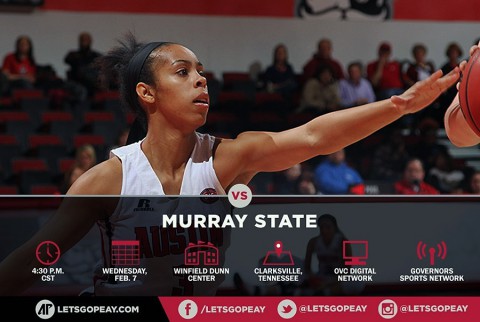 The Lady Govs have alternated wins and losses over their last four contests, most recently dropping a 71-61 decision to league-leading UT Martin, Wednesday. Austin Peay suffered its worst shooting night in more than two seasons, hitting just 29.4 percent of their shots.

Despite the poor shooting effort, Austin Peay outscored UT Martin for all but a fateful five-minute span to end the first half, the Skyhawks closing the frame with a 13-1 run to build an 11-point halftime advantage they did not relinquish.

Meanwhile, Murray State visits the Dunn Center after posting its first OVC win – an 86-81  decision against Southeast Missouri, Thursday. The Racers offense has suddenly found its rhythm, with the 86-point outing following its 85 points scored in a loss to UT Martin five days earlier. Murray State shot better than 41 percent from the floor and hit 22 free-throws in both contests.

Austin Peay will look for junior guard Tiasha Gray to work her way out of a recent shooting slump. She has failed to make 40 percent of her field goal attempts in each of the last three games after surpassing that mark in four of the previous five contests.

However, Gray’s 5-of-15 outing against UT Martin led the Lady Govs starting five which made only 23.1 percent (9-of-39) of its shots. APSU’s reserves made 50 percent of its attempts, with sophomore April Rivers posting a team-best 16 points on 4-of-9 shooting off the bench.

The Race to Eight

With five OVC wins and six games remaining, Austin Peay continues its march toward the eight-win mark in conference play. The 8-8 record has been important the past three seasons (since the advent of the 16-game schedule in 2011-12), with teams reaching that mark assured a spot in the tournament.

Murray State finished nonconference play with a 6-6 record which included a 4-6 mark against Division I opponents. However, the Racers opened OVC play with 9 consecutive losses before downing Southeast Missouri, Thursday. Murray State has made its living at the free throw line, posting league highs in makes (173) and attempts (241) in 10 conference games.

Senior preseason All-OVC pick Keiona Kirby leads Murray State with 14.4 points per OVC game, but has come off the bench in each of the last three games. Freshman Ke’Shunan James is averaging 14.3 points per game in league action.

In the January 11th contest, Murray State used a 25-of-35 outing at the free-throw line to hold on for the eight-point win. Austin Peay was whistled for 27 fouls in the outing – 20 of those in the second half.

Balanced scoring led Austin Peay to a win in the January 31st contest as six players scored 10 or more points for the first time in known program history. Austin Peay led by 10 points with seven minutes remaining in the first half and did not look back.

Murray State again paraded to the free-throw line, going 25-of-32 in the second meeting as Austin Peay racked up 26 fouls. However, that free-throw performance could not overcome the Lady Govs hot shooting night as it made 51.6 percent (32-of-62) of its field goal attempts.

Nicole Olszewski led the effort with 20 points and a career-high eight assists. Jennifer Nwokocha recorded her second consecutive double-double with a 12-point, 11-rebound outing. They were joined in double-digit scoring territory by Banks (13 points), Gray (13), Beth Rates (10) and Kristen Stainback (10).