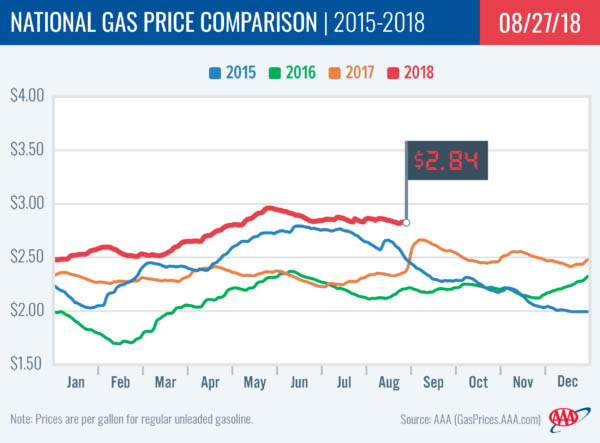 Tampa, FL – Motorists across the country continue to see their local pump prices dropping. On the week, state gas price averages declined as much as four cents while the national gas price average held steady at $2.84, which is two-cents cheaper than a month ago, but 48-cents more than a year ago.

“With Labor Day approaching, motorists could see a small swing towards higher gas prices, but any jump should not last past the holiday weekend,” said Jeanette Casselano, AAA spokesperson. 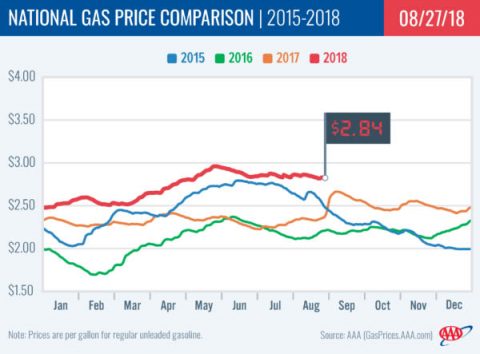 Last year’s Labor Day weekend saw gas prices spike, but that was due to Hurricane Harvey.

As it battered the Southeast, it shut down refineries and pipelines driving gas prices toward their highest point of 2017 ($2.67).

Despite no hurricane activity this Labor Day weekend, gas prices will be at their highest point for the holiday since 2014. 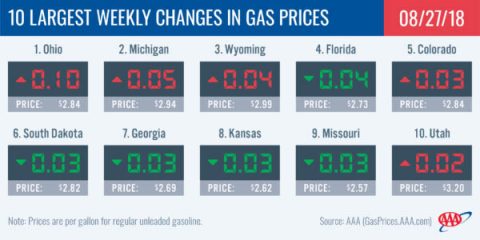 According to the Energy Information Administration’s (EIA) petroleum status report for the week ending on August 10th, inventories of gasoline in the region decreased by 200,000 bbl. They now sit at 30.1 million bbl, which is four million bbl higher than total levels at this time last year. Higher supplies will help offset potential price spikes in the region if demand increases in the run-up to Labor Day.

Additionally, the impact of Hurricane Lane on Hawaii’s gasoline refining and delivery systems has been minimal. Par Pacific, Hawaii’s largest refinery, closed as a safety precaution over the weekend, but it has since restarted.

Michigan (-9 cents), South Dakota (-7 cents) and Kentucky (-7 cents) lead the Great Lakes and Central states with the largest decrease in month-over-month prices and rank among the top five states in the country. Ohio (+3 cents) is the only state in the region to be paying more compared to the end of July.

The region had the largest build in gasoline inventory of any in the country adding 1.3 million bbl, according to the EIA. At 53.4 million bbl, inventories are at one of the highest levels of the year for the Great Lakes and Central region.

With the exception of Oklahoma (+2 cents) and Texas (+1 cent), all South and Southwest states’ gas price averages are cheaper on the week. Florida (-4 cents) and Georgia (-3 cents) saw the biggest drops in the region and both states land on the top 10 list of states with the largest weekly changes.

Gas prices in the region are dropping as demand slips and inventory levels continue to build for three straight weeks. With the addition of half a million bbl, total South and Southeast gasoline inventories sit at 81.5 million bbl – a level not seen since early July.

However, the coming weeks could bring major year-over-year surpluses in inventories when compared to last August’s major hurricane activity that shut down regional refineries and pipelines.

Gas price averages are relatively flat across the Mid-Atlantic and Northeast states. Prices dropped as much as two cents on the week, but only in Tennessee.

The majority of states report gas price averages only a penny cheaper since last Monday, except in Vermont ($2.91) and Rhode Island ($2.89) which held steady.

While the national year-over-year difference in gas price averages is nearly 50-cents higher, a handful of Mid-Atlantic and Northeast states are paying more than this average. Motorists in Connecticut (+56 cents), Massachusetts (+54 cents), Delaware (+54 cents), Rhode Island (+53 cents), Vermont (+-52 cents) and New York (+51 cents) are seeing the largest yearly differences in the region.

Similar to pump prices, gasoline inventories in the region remain relatively flat. EIA reports total inventories drew 57,000 bbl. Levels hold steady at one of the lowest points for this summer at 63.2 million bbl.

Unlike the majority of the country, gas prices continue to increase for many states in the Rockies. Since the beginning of August, Idaho (+14 cents) and Utah (+12 cents) have seen large jumps in pump prices. Part of the increase can be attributed to local refinery maintenance combined with high tourism season in the region this time of year.

Gasoline inventories continue to decrease with the latest EIA data reporting a total of 6.1 million bbl. That is the lowest level on record for the Rockies region since August 2014.

At the close of Friday’s formal trading session on the NYMEX, WTI increased 89 cents to settle at $68.72. A weak dollar contributed to last week’s price gain. Moreover, following the release of EIA’s weekly report that showed total domestic crude inventories fell by 5.8 million bbl during the previous week, crude prices increased. If this week brings a continued decline in crude stocks, crude prices could surpass $70.00 per barrel.

In related news, according to Baker Hughes, Inc., the U.S. lost nine oil rigs last week, bringing the total to 860. Currently, there are 101 more active rigs than last year at this time.