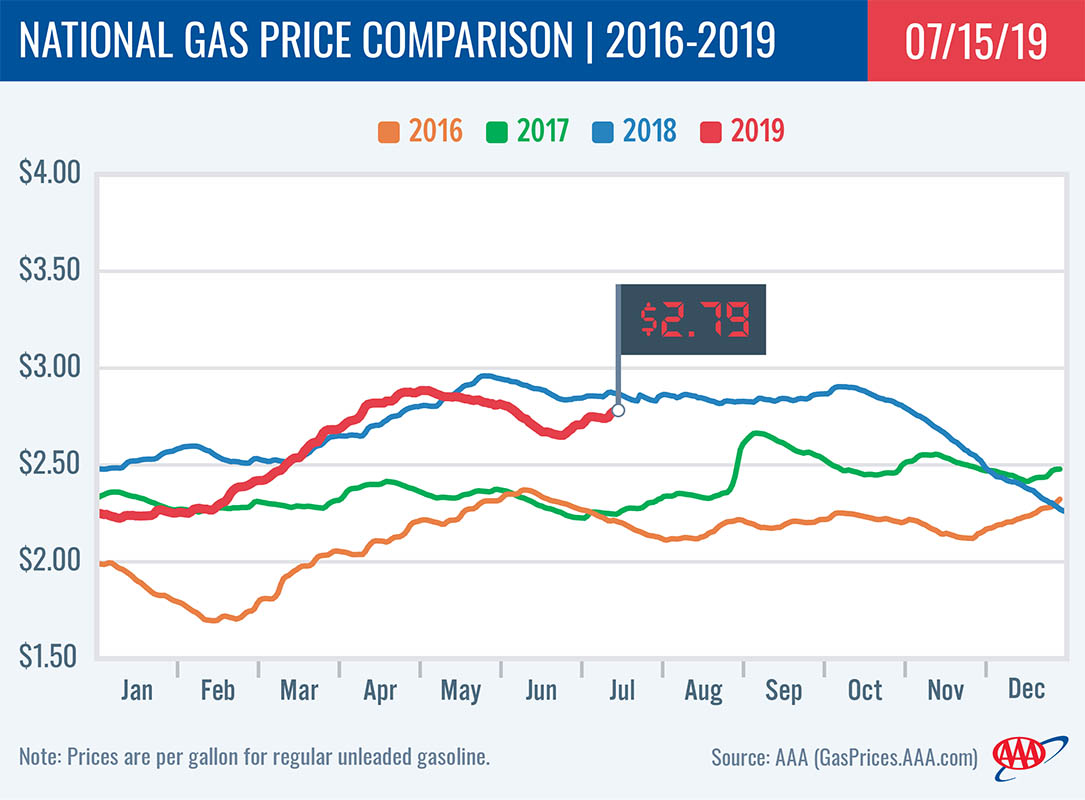 Tampa, FL – The national gas price average is $2.79, which is an eight-cent increase since the beginning of July. Gas prices have increased amid more expensive crude oil prices, robust demand and decreasing gasoline stocks.

Since last Monday, 18 states have seen their gas price averages increase by at least a nickel. Hurricane Barry, which made landfall in Louisiana this past weekend, seems to have had little impact on the national average. 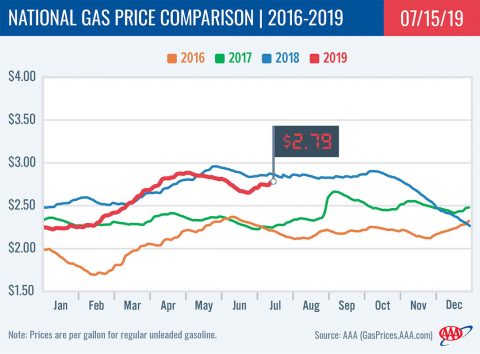 “Gas prices continue to increase for the majority of motorists east of the Mississippi, while those filling up in the West Coast and Rockies regions are seeing a bit of a reprieve at the pump,” said Jeanette Casselano, AAA spokesperson.

“While the national average is up, only seven states have gas price averages of $3.00/gallon or more. And notably, compared to the same time last year, the average is still eight cents cheaper,”Casselano stated.

Today’s average is four cents more than last week and a dime more expensive compared to a month ago. 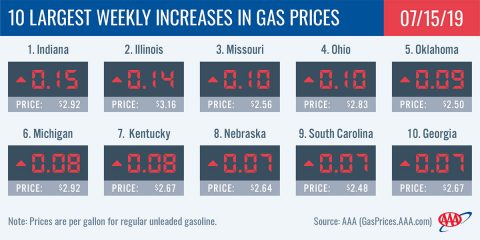 Seven of the top 10 states with the largest weekly increase in the country hail from the Great Lakes and Central states region: Indiana (+15 cents), Illinois (+14 cents), Missouri (+10 cents), Ohio (+10 cents), Michigan (+8 cents cents), Kentucky (+8 cents) and Nebraska (+7 cents). Among all states in the region, Kansas (+3 cents) saw the smallest jump in gas prices.

As regional refinery utilization holds strong at 97%, gasoline stocks stay intact at 49 million bbl, according to Energy Information Administration (EIA) data. This has helped to keep gas price increases moderate (less than a nickel) for most of the region, which is accustomed to volatility throughout the year.

Gas prices jumped nearly a dime in the region with motorists in Oklahoma (+9 cents), South Carolina (+7 cents) and Georgia (+7 cents) seeing the largest increase. Meanwhile, Florida (-4 cents) was one of the only states east of the Mississippi to see gas prices decrease.

Hurricane Barry had minimal impact on gas prices in the region. Louisiana’s state average increased only four-cents on the week, which is not atypical following a storm. The one refinery Barry forced to shut down is now in the restart process and other refineries that were in the storm’s path report few, if any, impacts on operations.

In EIA’s latest data, regional refinery utilization inches closer to 97%. Stocks took a significant 3 million bbl draw on the week. That drops total stocks to 81 million bbl, which is a low not seen in the region in eight weeks.

This news, combined with Barry’s impact on regional rigs, means that another draw could be likely in the EIA’s next weekly reports and pump prices are likely to see fluctuations through the end of the month.

States in the Mid-Atlantic and Northeast region are experiencing some of the lowest volatility in gas prices in the country, which may seem surprising considering the low utilization rates and gasoline stock levels.

On the week, the majority of states saw gas price increases of three cents or less. The outliers were: Tennessee (+7 cents), Washington, D.C. (+5 cents), Virginia (+4 cents) and Connecticut (+4 cents). Surprisingly, Delaware saw a decrease, albeit it a penny.

Regional refinery utilization is now down to 69%. However, the EIA reports the region saw a build of 714,000 bbl in gasoline stocks to total levels at 59.2 million bbl. The build was a surprise, but good news for the region and will help to keep gas price volatility in check.

With a four-cent price drop, Utah saw one of the largest decreases in the country on the week.

The region holds one of the strongest refinery utilization rates (97%) in the country which is helping to push prices cheaper this summer. On the week, gasoline stocks saw a small draw of 200,000 bbl to lower total stocks to 7.4 million bbl, per EIA data. Motorists are likely to see gas prices continue to sell under $3.00/gal through the end of summer in the region.

Motorists in the West Coast region are paying the highest pump prices in the nation, with most states in the region landing on the top 10 most expensive list today. California ($3.74) and Hawaii ($3.64) are the most expensive markets in the country.

The EIA’s recent report for the week ending on July 5th showed that West Coast gasoline stocks grew by approximately 500,000 bbl from the previous week and sit at 31 million bbl. The current level is about 200,000 bbl higher than last year at this time, which could help prices stabilize if there is any disruption in supply or gas demand surges in the region this week.

At the close of Friday’s formal trading session on the NYMEX, WTI increased by one cent to settle at $60.21. Crude prices increased last week as the market continues to worry about tensions in the Middle East, which could restrict global oil supply. If those concerns continue into this week, crude prices will likely continue to increase.


Additionally, Hurricane Barry, temporarily halted 60 percent of all crude production in the Gulf of Mexico last week. As the storm subsides and floodwaters diminish, crude production will resume. As a result, crude stocks may tighten in the region and could cause prices to increase modestly.