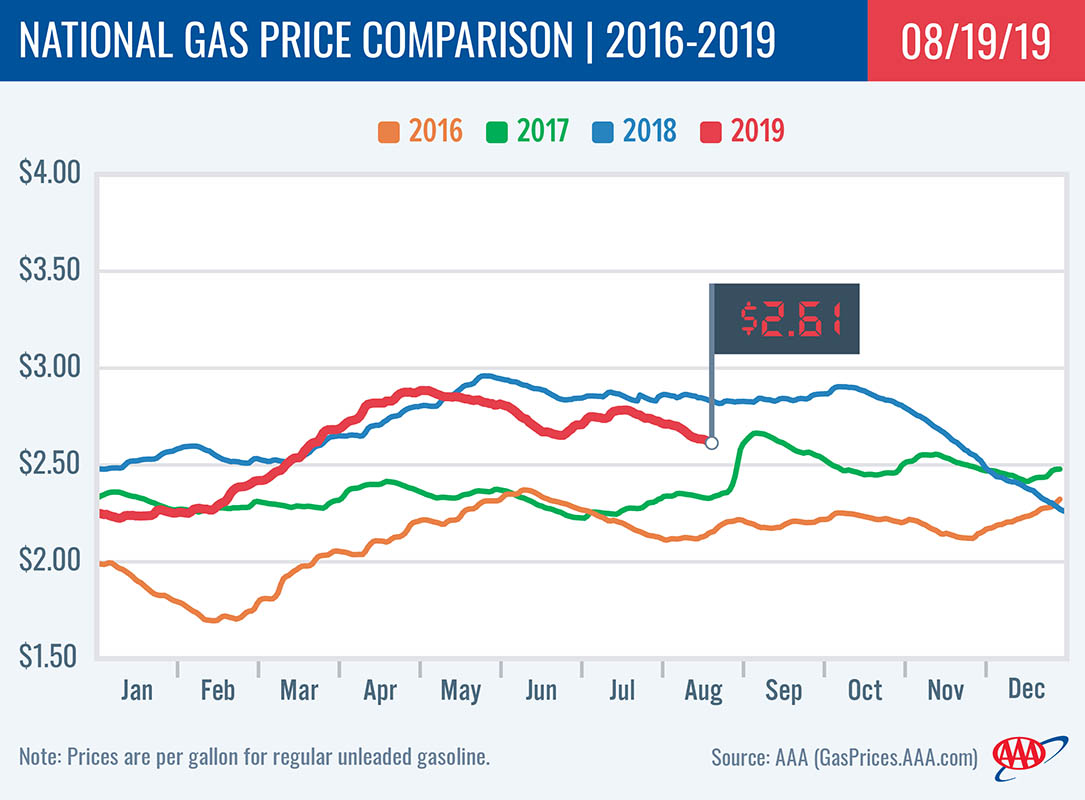 Tampa, FL – AAA says summer may be ending, but gasoline demand is soaring to new heights. In its latest reading, the Energy Information Administration (EIA) recorded demand at 9.93 million b/d, the highest since the agency began recording data in 1991.

As demand jumped, gasoline stocks fell by 1.4 million bbl and pump prices slowed their decline on the week. 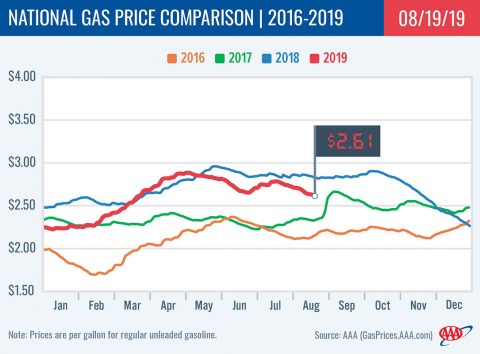 “Pump prices continue to trend cheaper for most motorists across the country, though the rate at which they are declining slowed in the last week with a handful of states only seeing a nickel decline at the most,” said Jeanette Casselano, AAA spokesperson.

“Demand recorded at a surprising all-time high, but it is expected to drop in the coming weeks as summer comes to an unofficial end,” Casselano stated.

Today’s national average is $2.61, which is three cents cheaper than last week, 17-cents less than a month ago and 22-cents cheaper than a year ago. Nearly half of all gas stations in the country are selling gas for $2.50 or less. 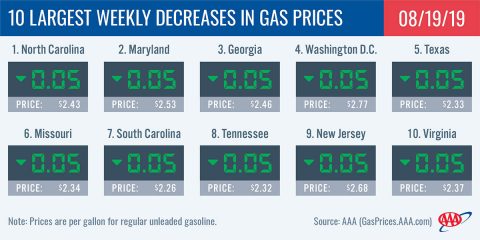 States in the South and Southeast carry among the cheapest gas prices in the country and some saw large declines on the week. Three state averages decreased by a nickel and land on the top10 list of states with the largest weekly decreases in the country: Georgia ($2.46), Texas ($2.33) and South Carolina ($2.26).

The region’s refinery utilization rate (96%) and gasoline stock levels (84 million bbl) both held steady from the previous week according to the latest EIA data. Stock levels have been mostly increasing since mid-July and sit at a 4.2 million bbl surplus compared to this time last year. This likely means continued pump price decreases heading into September.

The majority of motorists in the Great Lakes and Central states saw gas prices decrease on the week. However, Michigan (+6 cents) and Ohio (+2 cents) are the region’s and country’s outliers, being the only two states to see increases. This follows significant double-digit decreases each state saw the week prior: Ohio (-19 cents) and Michigan (-12 cents). However, this is not unordinary behavior in a region with high volatility.

All states in the region have gas price averages that are double-digits cheaper than a month ago. At a quarter or more cheaper, Illinois (-32 cents), Indiana (-26 cents) and Kentucky (-25 cents) tout the largest monthly decreases in the country.

Gasoline stocks remain at a healthy 50.1 million bbl. In the week ahead, gas prices may see little movement at the pump if gas stocks continue to hold steady. Regional refinery utilization remains strong with the EIA reporting a rate of 99% in their latest report.

At the start of the workweek, state gas price averages in the region range between $2.81 and $2.32.

Regional gasoline stocks saw a nearly half a million bbl build despite refinery utilization declining for a third straight week, down 4% to 70%, per EIA data. Gas prices are decreasing among stable stocks and utilization thanks to imports backfilling supply since the largest refinery on the East Coast will be shutting down in the near future.

Compared to a month ago, gas prices are cheaper in the region, but not as significantly cheaper as much of the country is seeing. With nine-cent monthly differences, Idaho, Wyoming, Montana and Utah rank among the top 10 states with the smallest monthly decrease.

EIA data reports regional refinery utilization dropped 5%. However, as the region was carrying a rate more than 100% in the past few weeks, this move only drops the current rate to 98.7%. Stocks dipped slightly (45,000 bbl) to now measure at 7.4 million bbl. Thanks to a summer of strong refinery runs, stocks sit close to a 1 million bbl surplus.

Pump prices in the West Coast region are the highest in the nation, with most states in the region landing on the top 10 most expensive list today. Hawaii ($3.64) and California ($3.59) are the most expensive markets in the country. Washington ($3.23), Nevada ($3.16), Oregon ($3.08) and Alaska ($3.03) follow. Arizona ($2.78) is the only state in the region to not be included in the list. Most state averages in the region have decreased on the week, with Nevada (-4 cents) seeing the largest decline.

The EIA’s recent report for the week ending on August 9 showed that West Coast gasoline stocks sit at 30.2 million bbl, falling by 1.5 million bbl from the previous week. The current level is approximately 100,000 bbl lower than last year at this time, which could cause prices to increase moderately if there is any disruption in supply or an increase in gas demand in the region this week.

At the close of Friday’s formal trading session on the NYMEX, WTI increased by 40 cents to settle at $54.87. Crude prices rose at the end of last week after sustaining heavy losses for two days. The losses came as a result of continued market worries about crude demand slumping this fall as a result of the ongoing trade dispute between the United States and China, the world’s two largest oil consuming countries. If the trade dispute continues this week, crude prices may see further declines.

Additionally, last week OPEC trimmed its global oil demand forecast, citing a slowing economy. OPEC now calculates that this year’s crude demand growth will hit 1.1 million b/d on a year-over-year basis. The new rate reflects a slight dip of 40,000 b/d due to a slowdown in global demand trends in the first half of 2019.