The two clubs last met on September 24th, 2017, when the Titans won 33-27 in Tennessee. The Titans have not traveled to Seattle since suffering a loss there on October 13th, 2013.

The Titans Radio Network and Nashville flagship 104.5 The Zone will carry the game across the Mid-South with the “Voice of the Titans” Mike Keith, analyst Dave McGinnis, sideline reporter Amie Wells, and gameday host Rhett Bryan.

Additionally, Sports USA will broadcast the game to a national radio audience. Play-by-play announcer John Ahlers and analyst Hank Bauer will have the call.

The Tennessee Titans hosted the Arizona Cardinals last week to begin the 2021 season. Cardinals quarterback Kyler Murray accounted for five touchdowns (four passing and one rushing), and outside linebacker Chandler Jones totaled five sacks to help the Cardinals fly out of Nissan Stadium with a 38-13 victory.


On defense, the Titans got sacks from outside linebacker Harold Landry III and defensive tackle Jeffery Simmons, and safety Kevin Byard recorded his 19th career interception to move into a tie for 15th place on the franchise’s career interception list.

About the Seatle Seahawks 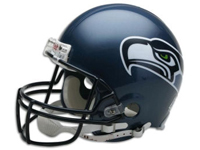 Head coach Pete Carroll is in his 12th year on the Seattle sideline. He led the Seahawks to the playoffs in nine of his first 11 years on the job, including last year’s division championship after finishing 12-4.

Quarterback Russell Wilson has started every game for the Seahawks since he was a third-round draft pick in 2012. At the conclusion of the 2020 campaign, he ranked second in NFL history for the most passing touchdowns in a player’s first nine seasons with 267 (Peyton Manning, 275), and he became the only quarterback in NFL history with a winning record in each of his first nine seasons.

The Seahawks opened last week at Indianapolis. Wilson passed for four touchdowns, including two to wide receiver Tyler Lockett, as the Seahawks rolled to a 28-16 victory.