Yonkers, NY – With a current crop of luxury models that are quiet, comfortable, fuel efficient, and among the most reliable, Lexus has earned the best overall score in Consumer Reports’ 2013 annual Car Brand Report Cards.

Lexus’ models are rarely sporty, but the brand’s overall score of 79 was earned on a foundation of plush and very reliable vehicles. Consumer Reports currently Recommends 100-percent of the Lexus vehicles it has tested. 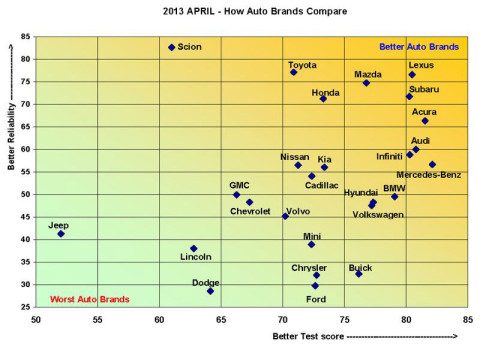 “That is quite a feat for a brand whose cars are brimming with technology including impressive hybrid drivetrains and complicated infotainment systems,” said Jake Fisher, director of automotive testing for Consumer Reports.

For 2013, Consumer Reports took a different approach than in previous years for its annual brand report cards story. CR graded each automaker’s individual brands rather than calculating a single score for all the brands under one carmaker.

For example, Toyota, Lexus, and Scion models were each scored separately this year instead of being incorporated into one overall score for Toyota. The same was true for Honda, Ford, Nissan, General Motors, Chrysler and other large manufacturers that market several brands.

Just off Lexus’ pace are Subaru and Mazda, with dead-heat report-card scores of 76. Consumer Reports notes that both brands build solid cars with good handling, fuel economy, and versatility at relatively affordable prices.

Subaru scores points for the sportiness of some models, including the new BRZ sports car. Testers found the BRZ great fun to drive, and its ratings improved the brand’s overall score.

Mazda models are among the most reliable cars. Most deliver a good blend of practicality, sportiness, and efficiency. The company also moved forward with the sporty new CX-5 SUV and its line of fuel-efficient Skyactiv engines. Consumer Reports currently Recommends 89 percent of the Mazda models it has tested.

Overall, eight of the top 10 scores were earned by Japanese brands. Toyota and Acura brands round out the top five with a report card score of 74. Honda and Toyota’s scores have been buoyed by the significant strides the automakers made with their respective redesigns of the Accord and Camry. Both handle better than their predecessors and get impressive fuel economy.

For 2013, Honda delivered a solid, speedy refresh of the Civic that put it back on Consumer Reports Recommended list after the unimpressive 2012 redesign had fallen off. Honda and Acura ranked closely, with Acura achieving a higher test score. Honda is still dragged down by the low scoring Insight and CR-Z.

Nissan brought up the rear among Japanese brands, weighed down by its low scoring and unreliable large trucks and SUVs, but still managed to land midpack among all automakers. The redesigned four-cylinder Altima delivered impressive fuel economy, though it wasn’t as engaging to drive as the previous model. The company’s luxury Infiniti brand placed four slots higher, thanks to its excellent G and M sports sedans, although the G is due to be replaced this summer.

European brands ended up scattered across the middle of the spectrum, distinguished from each other more by reliability than test score. Audi and Mercedes-Benz were the only non-Japanese nameplates to crack the top 10. They were ranked 8th and 10th, respectively. Audi separated itself from the pack as the only European brand to achieve very good reliability overall along with an excellent average road-test score.

Mercedes-Benz wasn’t far behind Audi and was tied with Acura for having the highest average road-test score. Volkswagen lost ground with some redesigned sedans that didn’t score as well as their peers. Several of its niche models, such as the Touareg SUV and the New Beetle, have well-below-average reliability.

Mini had the worst overall score of any European brand, placing 20th among the 26 brands. Only nonturbocharged Minis deliver average or better reliability. Recent Volvos, such as the S60 and XC60, are competitive and reliable, but the brand is saddled with older models.

General Motors is revamping its lineup and building several promising models, but some of its brands still anchor the bottom of Consumer Reports Brand Report Cards. Cadillac scored three places ahead of Chevrolet and GMC, based largely on the strength of the CTS.  Cadillac’s small and midsized models perform well and their reliability is average.

Some of its newer designs are hurt by complicated CUE controls. Buick, with subpar reliability, lagged farther behind, just ahead of Ford and Chrysler.

Ford’s and Lincoln’s overall scores have been dragged down by various issues. The MyFord Touch and MyLincoln Touch control interfaces are very difficult to use, and electronic problems in those systems have affected Ford’s reliability scores.

Ford vehicles’ road-test scores have also been handicapped by some models’ unrefined dual-clutch automated manual transmissions and a new lineup of EcoBoost turbocharged engines that don’t deliver the performance and fuel economy of some competitors’ larger engines.

“That’s unfortunate because many of Ford’s new models ride and handle as well as European luxury cars costing much more. And Ford’s latest hybrids, the Fusion Hybrid and C-Max, are impressive,” Fisher said.

None of Chrysler’s brands fared well. The only Dodge Consumer Reports recommends is the Durango SUV. Although the new Dart is an improvement over the car it replaced, it still lags behind the best compact sedans. Jeep doesn’t fare much better; the only model that is CR Recommended is the V6 Grand Cherokee.

The unreliable Wrangler joins the clumsy Compass and Patriot in weighing down the brand. The Chrysler brand is saddled with many older, uncompetitive models. Only the V6 Chrysler 300 scored well and is reliable. Overall, Consumer Reports Recommends fewer than half of the domestic models the organization has tested, and most of them come from Chevrolet and GMC.

That’s why CR’s 2013 rankings do not include Fiat, Jaguar, Land Rover,  Mitsubishi,  Porsche,  Ram,  or  Smart: Each had too few models for which CR had adequate reliability data. Several sell fewer than three models. Ratings on individual models from those makers are available at www.ConsumerReports.org.

The complete report and scores for all 13 automakers in Consumer Reports Car Brand Report Cards for 2013 is available in the April issue of Consumer Reports and at www.ConsumerReports.org . Updated daily, ConsumerReports.org is the go-to Website for the latest auto reviews, product news, blogs on breaking news and car buying information. Check out CR’s ongoing Twitter feed at @CRCars.

Consumer Reports is the world’s largest independent product-testing organization. Using its more than 50 labs, auto test center, and survey research center, the nonprofit rates thousands of products and services annually. Founded in 1936, Consumer Reports has over 8 million subscribers to its magazine, Website and other publications.

Its advocacy division, Consumers Union, works for health reform, food and product safety, financial reform, and other consumer issues in Washington, D.C., the states, and in the marketplace.