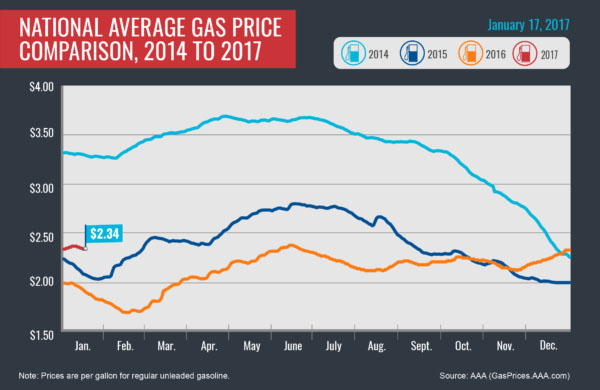 Tampa, FL – Gas prices have fallen for eight consecutive days, reaching today’s national average price of $2.34 per gallon. The price of retail gasoline has retreated since last week with today’s average three cents less per gallon than one week ago, but ten cents more than one month ago and 43 cents more per gallon year-over-year.

The slight decrease in retail prices can be attributed to less demand and adequate supply, but this downward dip may only be temporary as the market awaits OPEC’s December monthly output report which is due out later this week. 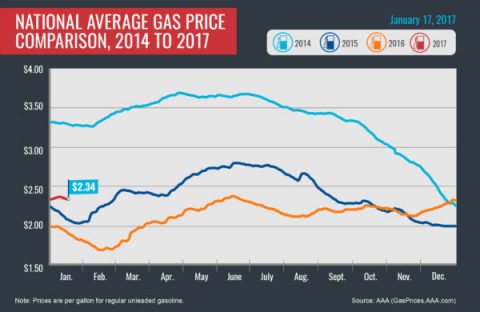 Drivers on the West Coast continue to pay the nation’s highest averages for gasoline, and the nation’s top four most expensive markets are all in this region: Hawaii ($3.06), California ($2.81), Alaska ($2.77) Washington ($2.74). The region recently saw an unexpected gasoline stock increase of 2 million bbl to 30.5 million bbl, which should help keep prices relatively steady over the next week.

The recent restart of BP’s Olympic Pipeline at its Anacortes, Washington, source on Friday also should help improve regional supplies in the northwest over the next few weeks. According to OPIS, BP had to shut down operations on the Olympic Pipeline in Anacortes last Wednesday due to power outages and other issues related to severe winter storms.

Recent issues at Western Refining’s refinery in El Paso, Texas, could potentially impact supply in Arizona and parts of New Mexico. OPIS reports that the refinery experienced a fire in a fluid catalytic cracker on Thursday evening.

The HollyFrontier Corporation also experienced problems last week with an overheated coker (oil processing unit) at their 52,000-b/d Cheyenne refinery in Wyoming. The refinery primarily serves the eastern slope of the Rocky Mountain region, which includes eastern Colorado, Wyoming and parts of Nebraska. Due to the regions’ insulated location, glitches in refinery production have the potential to impact prices at the pump.

Price swings have been common in the Great Lakes and Central states over the past few weeks with five of the top ten weekly price movers landing in the area. The top national decreases in the country are: Indiana (-13 cents), Ohio (-13 cents), Michigan (-11 cents), Kentucky (-8 cents) and Illinois (-6 cents). Prices rose last month following issues at the BP refinery in Whiting, Indiana, but with production reported to have returned to normal, prices in most of the Great Lakes region have moved lower.

Despite fluctuating prices across the Central region, two Central states still rank among the lowest in the nation: Missouri ($2.14) and Tennessee ($2.13).

Prices across much of the Mid-Atlantic and Northeast remain relatively steady. Despite the downward price movement nationally, four states in the region are among the 10 most expensive markets in the country: Pennsylvania ($2.64), Washington, D.C. ($2.59), New York ($2.53) and Connecticut ($2.48). OPIS reports that the Colonial Pipeline resumed gasoline delivery on Line 19 from Atlanta, Georgia to Nashville, Tennessee on Thursday after shutting it down last Saturday due to a suspected gasoline leak. Barring any unexpected impact to production or distribution, prices in the region should remain steady over the next week.

The southern regions remain the nation’s cheapest markets for gasoline, led by South Carolina ($2.11), Tennessee ($2.13), Mississippi ($2.14), Alabama ($2.14), Arkansas ($2.15), Texas ($2.15), Oklahoma ($2.15) and Louisiana ($2.17). Pump prices are typically lower in this part of the country based on its proximity to a large number of refineries and relatively low state fuel taxes. Prices in the region should remain on the lower end of the national spectrum provided there are no unexpected disruptions.

Markets continue to react to OPEC’s oil production agreement, as participating countries implement cuts. Tuesday saw petroleum futures rise following remarks by Saudi Arabia’s Energy Minister Khalid al-Falih, who said that Saudi Arabia would adhere to the output agreement. He also is confident that the agreed upon production cuts would rebalance the market.

Under last fall’s arrangement, OPEC, Russia and other non-cartel members pledged to cut oil output by nearly 1.8 million barrels per day for six months. Energy Minister Falih went on to say that if all countries continued to abide by the OPEC agreement the market would be rebalanced and it would not be necessary to further limit production beyond the six-month agreement.

These comments follow reports that Saudi Arabia has cut production by more than the 486,000 barrels per day. Traders will continue to keep an eye on oil supply and demand as OPEC and non-OPEC countries implement the terms of their agreement. At the closing of Friday’s formal trading session on the NYMEX, WTI was down 64 cents to settle at $52.37 per barrel.