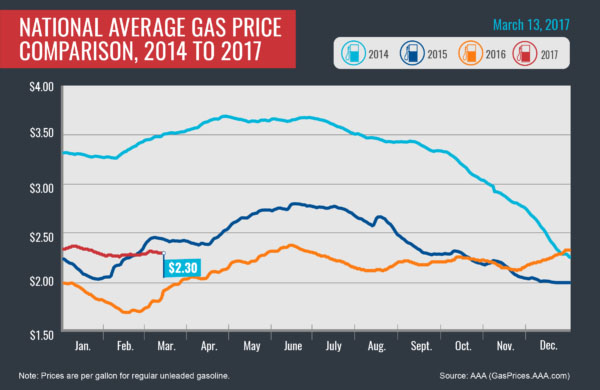 Tampa, FL – After remaining relatively flat, the national average price for regular unleaded gasoline has now fallen for 10 straight days to today’s average of $2.30 per gallon.

Today’s national average is one cent less than one week ago and two cents more than one month ago. Compared to this same date last year, consumers are paying 37 cents more per gallon at the pump. 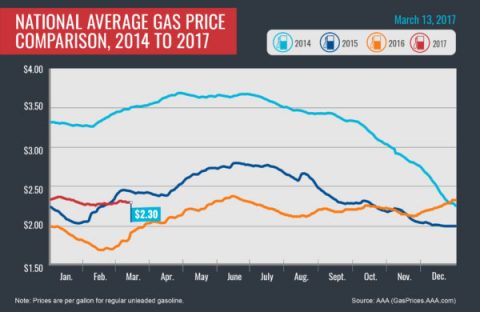 Gas prices may continue to drop in the near future due to declining crude oil prices and a well-supplied market, but will begin to creep up again over the next month due to seasonal refinery maintenance and the May 1st required switch over for producing summer-blend gasoline.

This prediction comes with the necessary caveat that an unexpected market-moving event, such as unplanned domestic refinery maintenance or further production cuts from OPEC and non-OPEC countries, could further impact prices and supply.

Most drivers in the West Coast saw increases at the pump this week: Oregon (+8 cents), Washington (+5 cents), Nevada (+3 cents), Alaska (+2 cents) and California (+2 cents). Maintenance continues at Phillips 66’s 107,500-b/d refinery in Ferndale, Washington, while most other regional refiners have already made the switch to summer-blend gasoline.

Gas prices in the Rocky Mountain states are a mixed bag of increases and decreases on the week, with Utah (+7 cents) landing on the top five list of largest weekly increases. Plains All American Pipeline completed repairs on the Wahsatch Pipeline late Friday evening.

The pipeline, which receives crude oil from locations near Evanston, Wyoming, and makes deliveries to refineries in Salt Lake City, shut down February 10th, due to indications of soil movement. OPIS reports that many local refiners cut production rates and relied on crude delivery by trucks while the pipeline was offline.

The latest EIA report shows a 69,000 b/d drop in gasoline production by regional refiners and blenders to 2.364 million b/d for the week ending on March 3rd. Local refinery issues are the likely cause of production declines. Phillips 66’s 330,000-b/d Wood River refinery is currently undergoing planned and unplanned maintenance.

Prices in the Mid-Atlantic and Northeast regions have remained relatively flat over the past week, moving by +/- 2 cents or less in most parts of the regions. According to the latest EIA report, regional gasoline inventories dropped by 3.8 million bbl. Pennsylvania ($2.49), Washington D.C. ($2.47) and New York ($2.43), remain on the list of most expensive markets in the country while Tennessee ($2.05) and Virginia ($2.10), both land on the top 10 list of least expensive markets.

The Southern region continues to remain home to some of the nation’s lowest average prices for retail gasoline with six of the nation’s top 10 least expensive markets: South Carolina ($2.03), Alabama ($2.05), Mississippi ($2.07), Arkansas ($2.09), Texas ($2.10) and Louisiana ($2.10). The latest EIA report shows a drop in regional gasoline inventories as refiners prepare to make the switch to summer-blend gasoline.

Traders will continue to keep a close eye on OPEC compliance and U.S. supply and production. At the close of Friday’s formal trading session on the NYMEX, WTI was down 79 cents to settle at $48.49 per barrel.