These programs have met at least once (sometimes twice) every season since 1982. Holly Warlick and Karen Aston coach two of 14 Division I women’s teams that remain unbeaten in 2017-18 (as of Friday).

The Lady Vols remain undefeated after dismantling a Troy team that entered with a 4-1 record by an eye-popping score of 131-69 on Wednesday night in Knoxville. 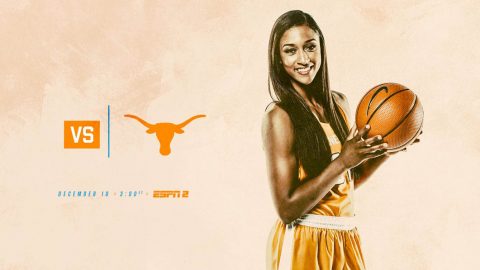 The Lady Vols will be aiming to go 10-0 for only the 10th occasion in school history and for the first time since Warlick’s squad did so at the outset of the 2013-14 campaign en route to a 29-6 mark.

Texas comes to Knoxville on the heels of a resounding 81-53 victory at Georgia last Sunday.

The Longhorns have dominated nearly every game they’ve played thus far, except for a nine-point win at LSU (75-66) on November 24th.

Beth Mowins (PxP) and Debbie Antonelli (Analyst) will describe the action for the Tennessee-Texas broadcast on ESPN2 in the Lady Vols’ first linear telecast of the season.

Mickey Dearstone will handle the call for IMG College/Lady Vol Network radio/online broadcasts for the 19th season. A link to the live audio stream can be found on each Hoops Central page or the Lady Vol schedule on UTSports.com.

Coming Up for UT Lady Vols

The Long Beach State game will be streamed on Beach Vision, while the Stanford match-up will be carried by the Pac-12 Networks.

The Lady Vols will next play at home on January 4th, 2018 as Auburn comes to Thompson-Boling Arena for UT’s first game of 2018 and the second game of the SEC schedule. Tip time is 6:00pm, and the game can be seen on SEC+ (WatchESPN).

Tennessee vs. No. 2 Teams

The Big Orange women have won eight of nine games by double-digit margins, including by 43 vs. Central Arkansas and 53 vs. Alabama State and 62 vs. Troy in their last three games.

The Lady Vols have posted 61 or more points in three of their last four halves of basketball, marking the first time in program history that has been accomplished.

This is the longest Warlick has gone with the same lineup to open a season since she began the first six games of the 2013-14 campaign 6-0 with the same starting five of Cierra Burdick, Bashaara Graves, Isabelle Harrison, Ariel Massengale and Meighan Simmons.

The last time Tennessee opened a season with a starting five and utilized the same quintet this long was in 2007-08, when the lineup of Candace Parker, Angie Bjorklund, Nicky Anosike, Shannon Bobbitt and Alexis Hornbuckle reported for the opening tip the first 11 games of that campaign. UT went 10-1 in that span and went on to win the NCAA title with a 34-3 record and the SEC title with a 14-0 mark.

UT has four players averaging double figures in scoring, including seniors Mercedes Russell (17.4) and Jaime Nared (17.0), and freshmen Rennia Davis (13.2) and Anastasia Hayes (12.6). Junior Meme Jackson is knocking on the door at 9.0.

Russell has led Tennessee in scoring five times, while Nared has done so three times, and Davis and Hayes tied for honors on one occasion.

Russell has scored in double figures in every game, while Hayes has done so eight times and Nared and Davis have hit 10 or more in seven games.

Holly Warlick‘s squad has led at the half of all nine games, including a double-digit margin in seven of those.

Senior Jaime Nared scored 27 points and freshman Evina Westbrook dished out a career-high 12 assists to lead No. 11/13 Tennessee to a 131-69 victory over Troy on Wednesday night at Thompson-Boling Arena.

The Lady Vols (9-0) used a balanced offensive effort to put away the Trojans (4-2), as seven players reached double figures in points. Defensively, UT was able to hold the nation’s fifth highest scoring offense to 22 points below its average of 91.8 per game.

Tennessee was ready from the tip again, racing out to a 12-0 lead for the second consecutive game. UT’s All-SEC duo of Nared and classmate Mercedes Russell led the way offensively through the first quarter, with Nared going 5-for-7 from the field for 14 points and Russell scoring nine points on 3-for-3 shooting. The Lady Vols led 34-15 at the end of the frame.

Tennessee’s unselfishness was on full display throughout the game, as the team finished with 38 assists on 54 baskets. The assist total ranked second in school history, while the number of field goals made ranked fourth.

Davis and Meme Jackson recorded 16 points and 10 rebounds each, while Cheridene Green picked up a double-double of her own, scoring a career-high 16 points and bringing down 13 boards in just 20 minutes of play. It was Davis’ fourth of the season and the first of Jackson’s and Green’s careers.

Freshman point guard Anastasia Hayes also tossed in 12 points and notched career highs with nine assists and seven rebounds. Kortney Dunbar shot 6-for-7 from the floor in the second half to finish with 17 points, and Kasiyahna Kushkituah added six points and five boards. Shatterika O’Neal finished with 15 points on 6-for-15 shooting to lead Troy offensively.

Evina Westbrook tied a UT freshman record with 12 assists, matching Ariel Massengale, and that mark tied for seventh among all UT players.

The 38 assists were second all-time at UT, while the rebound total (73) was third, field goals made (54) were fourth and field goals attempted (91) were fifth.

The Series vs. Texas

The Lady Vols have dropped three straight to the Longhorns, including two straight in Austin and a 64-53 decision in Knoxville on November 29th, 2015.

While the first meeting in the series was on December 8th, 1978 (Tennessee 84, Texas 60), this marks the 36th-consecutive season these programs have met. The UTs played twice in 1986-87 and 1991-92 in regular-season tourney match-ups in addition to the regularly-scheduled games.

Last season marked the first time in the series Tennessee was not ranked entering the game. Texas has been unranked six times in 38 meetings. An unranked team has never won in this series.

When the statue and plaza bearing Summitt’s name was dedicated on November 22nd, 2013, Conradt was in Knoxville for the festivities. Likewise, Summitt was in Austin when Conradt’s statue was dedicated on October 5th, 2012.

Three Texas players may be familiar to SEC followers, as post Jatarie White began her career at South Carolina, and Vanderbilt was the first stop for the Caron-Goudreau twins.

Tennessee (4-4) trailed by 15 in the second quarter but made a run to bridge the last part of the second period and the first five minutes of the third quarter to take the lead. Texas was able to recapture the lead and withstood late three-pointers from Alexa Middleton and Diamond DeShields to hold on for the win.

Jaime Nared tallied a career-high 22 points to go with five rebounds and two blocks. DeShields chipped in 16 points to score in double figures for the seventh time in eight games this year.

Texas (3-4) started the game on a 9-0 run and led 22-12 after the first quarter. The Lady Vols were out-rebounded 17-9 in the opening frame, which helped the Longhorns score nine second-chance points.

Texas had five players score in double figures, led by 13 from Brooke McCarty and 12 from Joyner Holmes, Lashann Higgs and Kelsey Lang. Lang also added eight rebounds and six blocks for the Longhorns.

Texas comes in at 7-0 and is averaging a sizzling 93.0 points per game.

Like Tennessee the Longhorns have four scoring in double figures, led by senior guards Brooke McCarty and Ariel Atkins at 13.4 points per game each.

Another guard, Lashann Higgs (11.9), and forward/center Jatarie White (11.4) round out that quartet.

Another similarity to the Lady Vols, Texas is shooting 49.9 percent from the field and out-rebounds its opponents, 46.6 to 31.1.

The Longhorns return two starters and nine letterwinners from a squad that finished 25-9 overall and 15-3 in the Big 12 to finish second. UT made it to the Sweet 16 round in the NCAA Tournament.

The Longhorns will be playing their third SEC foe this season, as they already took care of LSU, 75-66, on November 24th and Georgia, 81-53, on December 3rd.

The Texas Women’s basketball team earned its seventh win of the season, handing the previously undefeated Georgia Lady Bulldogs their first loss of the 2017-18 season, 81-53, last Sunday in Stegeman Coliseum.

Senior Ariel Atkins led the way for the Longhorns, scoring 17 points overall with 14 in the first half alone. The guard was 3-for-3 in three-pointers and tallied nine defensive rebounds, both season highs.

Additional top performers for Texas were junior Jatarie White who had 13 points, six rebounds, and a steal, and junior Lashann Higgs with 12 points, five assists and four rebounds. Senior Brooke McCarty also joined in the double-digits for points with 12.