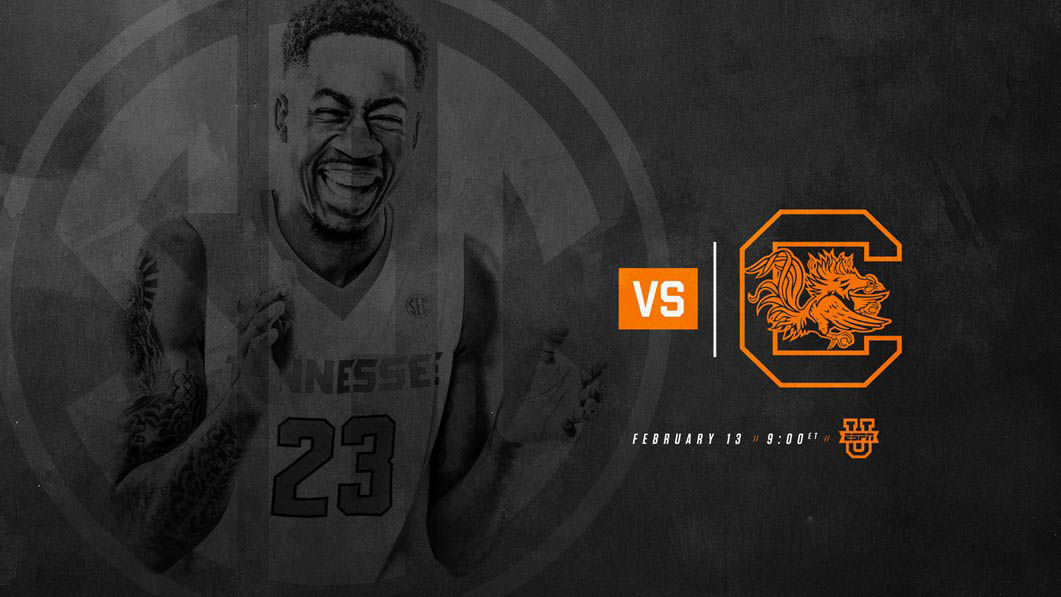 Knoxville, TN – Coming off its worst loss of the season, No. 18 Tennessee will look to bounce back on Tuesday night at Thompson-Boling Arena in a matchup with the South Carolina Gamecocks. The game tips at 8:00pm CT and will be televised live on ESPNU and streamed online via WatchESPN.

The Vols (18-6, 8-4 SEC) were on the losing end for just the second time in over a month on Saturday, falling on the road at Alabama, 78-50. UT shot a season-low 28 percent (16-of-58) from the floor and made only one basket in the final 10 minutes of play. Tuesday night offers a chance to bounce back as the Vols prepare to close out strong during the final stretch of the regular season. In the first meeting with South Carolina, UT came out on top in Columbia, 70-63, behind Lamonté Turner’s 25 points off the bench. 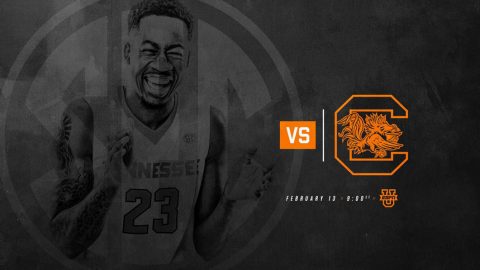 On the season, Chris Silva leads the Gamecocks in scoring (14.3 ppg) and ranks fourth in the SEC in rebounding (7.6 rpg). Graduate transfer guard Frank Booker is the team’s other double-digit scorer, tallying 11.3 ppg to go along with 3.1 rpg, 1.1 spg and 1.0 apg in 25 minutes of action per game.

After Tuesday’s matchup, the Vols prepare for a 5:00pm CT tip at Georgia on February 17th, the first of two meetings in the final five games of the regular season. UT then returns home for a crucial game against the Florida Gators, who Tennessee is currently tied with for second in the SEC standings, on February 21st at 8:00pm CT.

Despite Saturday’s 28-point loss, the Vols still have the SEC’s second-best scoring margin in league play (+4.8). The Vols are rated No. 13 in the NCAA RPI and own five “quadrant 1” wins.

Since defeating Kentucky before hosting the Vols on January 20th, Frank Martin and the Gamecocks (13-12, 4-8 SEC) have struggled to get a win.

Following the close 70-63 loss against UT, South Carolina went on the road and upset Florida, 77-72. USC then returned home for its matchup against top-10 ranked Texas Tech in the Big 12/SEC Challenge. Despite Caroline holding a two-possession lead with less than four minutes to play, the Red Raiders used a 13-2 run to close out the game and get the win.

Entering Tuesday’s contest, the Gamecocks have lost five straight games and six of their last seven.

On the season, Chris Silva leads the Gamecocks in scoring (14.3 ppg) and ranks fourth in the SEC in rebounding (7.6 rpg). Graduate transfer guard Frank Booker is the team’s other double-digit scorer, tallying 11.3 ppg to go along with 3.1 rpg, 1.1 spg and 1.0 apg in 25 minutes of action per game.

No. 21 Tennessee went on the road for a hard-fought, 70-63 victory against South Carolina at Colonial Life Arena on January 20th, 2018.

The Vols held the lead for nearly 37 minutes. South Carolina stayed within striking distance with its 3-point shooting, draining six of 10 in the second half. UT was able to counter that with a strong presence down low, scoring 39 points in the paint.

During the final stretch of play, Tennessee held South Carolina to just 1-of-11 shooting from the field to spur an 11-3 run, during which UT was 6-of-6 from the free-throw line to seal the victory.

Lamonté Turner posted another strong performance off the bench, dropping 25 points, six boards and a pair of assists in 32 minutes of action. Grant Williams added 14 points and a pair of blocks.

Admiral Schofield chipped in 12 points, four rebounds, three assists and two steals, while true freshman Derrick Walker scored a career-high 10 points on 5-of-5 shooting to help the Vols shoot 57 percent (23-of-40) from the floor in the game.

Tennessee put together a solid first half on offense, converting on 58 percent (11-of-19) of its shots from the floor.

Despite UT hitting seven of its final 10 attempts in the period, the Vols were held without a basket during the final 3:52 of the half. But their defense stepped up, holding the Gamecocks to just two points during the last four minutes of the frame.

The two squared off seven times as coaches in the Big 12 Conference, when Barnes was with Texas and Martin was at the helm at Kansas State. Martin owns a 7-5 edge in head-to-head meetings.

Martin accepted the head coaching position at South Carolina in 2012 and owns a 109-86 record with the Gamecocks.

The NCAA Tournament Selection Committee announced its current top-16 seeds Sunday on CBS. Tennessee has played five of those teams—six if you count the Vols’ preseason charity exhibition at Clemson. Tennessee has faced two projected No. 1 seeds (Villanova and Purdue), one No. 2 seed (Auburn) and one No. 3 seed (UNC).

In SEC play, Tennessee leads the league in assists per game (15.4) and assist/turnover ratio (1.4) while ranking second in scoring margin (+4.8) and rebounding defense (33.4 rapg).

Sophomore guard Lamonté Turner has made 10 3-pointers over UT’s last three games. Turner leads the SEC with a .929 (39-of-42) free-throw percentage during league play.

Jordan Bone and James Daniel III share the team lead with 83 assists this season. Bone’s assist/turnover ratio is 2.59, and Daniel’s is 2.52 to rank fourth and fifth in the SEC, respectively.