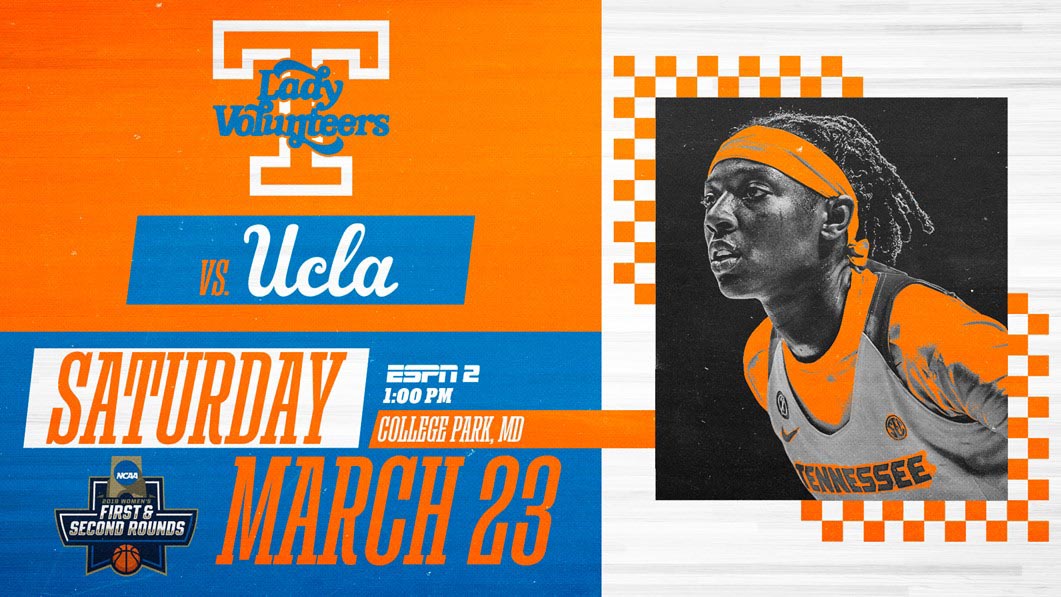 Tip-off is slated for approximately 12:00pm CT at the XFINITY Center on the University of Maryland campus. The game will be televised by ESPN2 and carried by the Lady Vol Radio Network.

In the other first round game in College Park, No. 3 seed Maryland (28-4) will meet No. 14 seed Radford (26-6) at 10:00am CT on Saturday. The winner of those games will advance to the second round and play in College Park on Monday. Tip time and TV info. are to be determined. 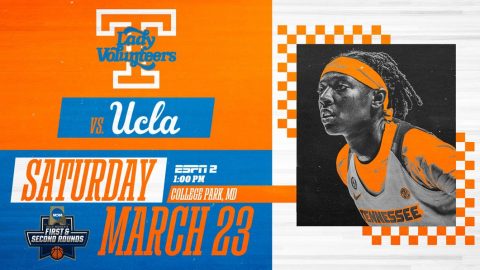 The Lady Vols enter the NCAA Tournament having won two of their past three and seven of their last 12. In the SEC Tournament at Greenville, SC, on March 7th and 8th, they defeated LSU, 68-66, in the second round and then fell in the quarterfinals to eventual champion No. 5/5 Mississippi State, 83-68.

Roy Philpott (play-by-play) and Brooke Weisbrod (analyst) will have the call for ESPN2.

This marks UT’s sixth game in College Park but its first NCAA appearance in the state of Maryland.

It is Tennessee’s initial visit to the XFINITY Center.

UT is 3-1 vs. Maryland and 1-0 vs. George Washington in games played in College Park.

This marks UT’s latest-on-the-calendar NCAA First Round game since 2013, when UT hosted Oral Roberts in an opening round contest on March 23rd.

This marks the 20th meeting between the Tennessee Lady Vols and UCLA, with UT possessing an 18-1 record in the series.

All 19 games between these teams have been completed in regulation.

UT carries a 15-game series winning streak into Saturday’s match-up, but this will mark the first meeting between the Lady Vols and Bruins with Holly Warlick and Cori Close at the helm of the respective programs.

The last time these programs met during the postseason, Tennessee raced to a 104-86 victory in Greensboro, NC, in the third-place game of the 1979 AIAW Championships on March 25th.

The Lady Vols’ point guard that season was Holly Warlick, who had nine assists, four steals, six points and the team’s only blocked shot of the day vs. the Bruins.

Warlick had the offense clicking, distributing the rock to three UT players who finished with 20+ points in the contest to offset the hot shooting of UCLA’s Denise Curry (38 points on 18-of-25 shooting).

Rebekah Gardner scored 15 of her career-high 24 points in the first half for UCLA (5-4), and Thea Lemberger and Markel Walker added 11 points each for the Bruins.

UT and UCLA share four common opponents this season. UT was 1-3, while UCLA was 2-3.

The Lady Vols are making their 38th appearance in the NCAA Women’s Basketball Championship, and UT is the only program to appear in all 38 tournaments.

Tennessee was an at-large qualifier for the tourney field, finishing eighth in the Southeastern Conference regular season and bowing out in the quarterfinal round of the league tourney to No. 5/5 Mississippi State, the eventual champion.

Tennessee is second behind UConn in winning percentage at .812 in tourney play.

UT is 13-6 in NCAA play under Holly Warlick.

UT has made the Elite Eight 28 times and in three of the past six seasons, posting an 18-10 record in that round.

All told, UT has played 87 different opponents during all rounds of the NCAA tournament, including UCLA on Saturday.

Tennessee Lady Vols In The First and Second Rounds

Tennessee is making its 38th appearance in the NCAA First/Second Rounds, and it owns a 58-3 record during those games.

The Lady Vols are 30-1 all-time in the NCAA First Round and 28-2 in the NCAA Second Round.


About the UCLA Bruins

Sophomore forward Michaela Onyenwere has emerged, leading the team at 18.2 ppg. and 8.1 rpg.

The Bruins are coached by Cori Close, who is 170-98 in her eighth season as a head coach, all at UCLA. She has guided the program to five NCAA appearances during her tenure and one WNIT berth, winning a WNIT title in 2014-15.

The 25th-ranked UCLA women’s basketball team took No. 6 Oregon wire-to-wire before the valiant effort came up short to the Ducks in overtime, 88-83, on March 9th at MGM Grand Arena in the semifinals of the Pac-12 Tournament in Las Vegas.

Kennedy Burke collected her second double-double of the season, tallying a team-high 27 points and 10 rebounds to go along with three blocks and two steals.

Japreece Dean flirted with a triple-double, posting 22 points, seven rebounds and seven assists. UCLA got another double-double from Michaela Onyenwere (17 points, 10 rebounds), her 12th of the season.