The report’s Establishment Survey finds that the economy added 225,000 jobs in January, crushing market expectations of 158,000 jobs. Including upward revisions to November and December, average monthly employment growth over the past year was a healthy 171,000 jobs.

This month’s report included BLS’ annual revisions to the Establishment Survey. These revisions showed that 514,000 fewer jobs were added during the year ending in March 2019 than were previously reported.

These revisions do not mean that jobs were lost, but rather that they were previously overestimated. But due to strong job growth in January, the economy has still added 7 million jobs since President Trump’s election. In the 38 months since the election, the economy has created at least 100,000 jobs in 34 of those months and has added jobs every single month.

Sustained job creation drives up Americans’ wages, as the past year and a half saw the strongest earnings gains since the recession. Average hourly earnings grew 3.1 percent year-over-year, marking the 18th consecutive month of growth of 3 percent or more. Wages rose even faster for production and non-supervisory workers, who saw 3.3 percent year-over-year growth. Under President Trump, workers’ wages have grown faster than their managers’ wages—the opposite result than under the previous administration. 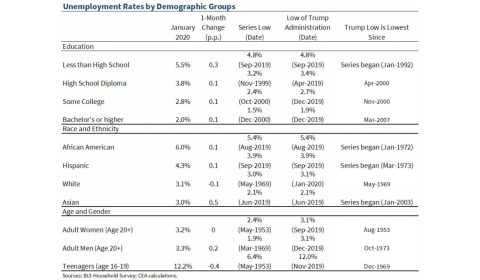 The primary reason for the slight uptick in January’s unemployment rate was an increase in labor force participation from workers coming off the sidelines to look for work and find jobs. Over the past three months, the average share of new workers who came from outside of the labor force was 73.2 percent.

This influx of workers signals increased confidence in the economy and improved job prospects. The January reading of the Conference Board Consumer Confidence Index increased to 131.6, a 31 percent increase from the reading the month before President Trump’s election. Furthermore, the ratio of respondents who say jobs are “plentiful” compared to those who say jobs are “hard to get” is more than 4:1.

After a record-setting 2019, the U.S. economy started off 2020 with another strong jobs report. As happened last year, in January, job gains beat expectations, wages grew above 3 percent, and unemployment rates remained at or near historic lows.