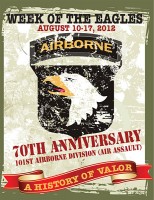 Fort Campbell, KY – The “Screaming Eagles” of the 101st Airborne Division (Air Assault) will host the 2012 Week of the Eagles, August 10th-17th, 2012, at Fort Campbell, KY, to reflect upon all that the division’s Soldiers have achieved since the unit was created with no history, but with a “Rendezvous with Destiny.”

“This year is particularly significant because it coincides with the 70th anniversary of the division. We invite all Soldiers, families and friends to participate and experience Week of the Eagles 2012.”

Week of the Eagles 2012 is scheduled for August 10th-17th, and the lineup of events is filled with something for everyone to enjoy from Army combatives competitions to air shows featuring an air assault demonstration, and a concert by popular music performing artist Kelly Clarkson, courtesy of the Fort Campbell Directorate of Family, Morale, Welfare and Recreation.

This year’s theme for Week of the Eagles is “a history of valor,” and together the 101st Airborne Division and Fort Campbell community will highlight and honor the soldiers who have served before them as well as alongside them.

“It is a privilege to serve in the 101st Airborne Division,” McConville said of the storied U.S. Army unit. “We have been left a proud legacy by those who have served before us.”

Gold Star Families and community members who have lost loved ones or friends are encouraged to participate in the Run for the Fallen and attend unit specific memorial ceremonies. Other events during the 2012 Week of the Eagles include a division run, a community health fair, 10K and 5K fun runs, a car and motorcycle show, the Legacy Golf Tournament, a marksmanship competition, unit open houses and a commanders vs. command sergeants major softball game.

The week will close with a division review, where families and community members can look on as Veterans and Soldiers of the legendary 101st Airborne Division (Air Assault) will line up in formation and be reviewed by a distinguished Screaming Eagle Veteran.

Learn About The 101st Airborne Division’s “Rendezvous With Destiny”

The 101st Airborne Division was activated August 16th, 1942 at Camp Claiborne, Louisiana. Its first Commanding General, Major General William C. Lee, noted that the Division had no history, but that it had a “rendezvous with destiny” and that the new Division would be habitually called into action when the need was ‘immediate and extreme”. Throughout its 66-year history, the Division has amassed a proud record, in both war and peace, unmatched by any other unit.

Following its activation and initial training in the United States, the Division embarked for the European Theater of Operations in September, 1943 where it continuing its training in England. During the early morning hours of June 6th, 1944, the Screaming Eagles parachuted into the Contentin Peninsula becoming the first Allied Soldiers to set foot onto occupied France. The 101st Airborne Division, charged with clearing the way for the 4th Infantry Division’s landing on Utah Beach, eventually linked the Utah and Omaha beachheads and liberated the city of Carentan. After a month of fighting, the Division returned to England to prepare for future operations.

On September 17th, 1944, the Division jumped into The Netherlands spearheading Operation Market Garden. Holding a narrow 16-mile corridor through enemy-held territory, the Division fought against heavy odds for 72 days. In late-November, 1944, the Division returned to France for a well-deserved rest. The rest would be a short one.

To counteract the massive German offensive through the Ardennes Forest in mid-December 1944, the 101st Airborne Division was unexpectedly recalled to the front. Responsible for defending the critical road junction at Bastogne, Belgium, the 101st Airborne Division was surrounded by strong enemy forces that demanded its immediate surrender. Responding to the German ultimatum, Brigadier Anthony C. McAuliffe made history with his famous one-word reply … “Nuts!” Although the siege of Bastogne was broken on December 26th, 1944, intense fighting continued until mid-January, 1945 as Allied units reduces Nazi gains in the Ardennes salient. 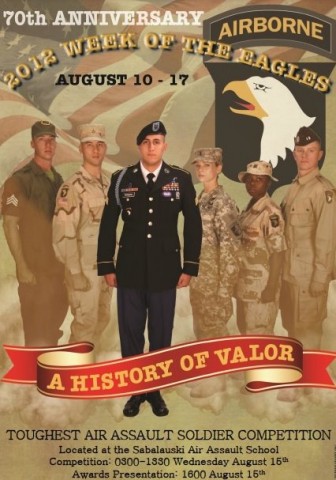 Attacking the heart of Germany through the Ruhr valley, the 101st Airborne Division pursued retreating German forces into Bavaria. In spring 1945, the Screaming Eagles liberated the Landsberg concentration camp and Hitler’s mountaintop retreat in Bertchtesgaden. The end of World War II in Europe relegated the 101st Airborne to occupation duties in Germany, Austria, and France. The Division was inactivated on November 30th, 1945.

On July 29th, 1965, the 1st Brigade, 101st Airborne Division was ordered to the Republic of Vietnam earning the nick-name of “The Nomads of Vietnam”. The remainder of the Division remained at Fort Campbell until ordered to Vietnam in late-1967. During the enemy’s ill-fated Tet Offensive in 1968, the Screaming Eagles were involved in combat operations from Saigon to Quang Tri Province.

In August 1968, the Screaming Eagles shed their parachutes in favor of helicopter-borne operations earning a new designation—the 101st Airborne Division (Airmobile). After the Tet Offensive, the Division settled into Thua Thien Province and continued offensive operations there until redeployed to the United States in early-1972.

In March 1982, elements of the 101st Airborne Division (Air Assault) began six-month deployments to the Sinai Peninsula as members of the Multinational Force of Observers. Tragedy struck in December 1985, when 248 Screaming Eagles redeploying from the Sinai were killed in a charter airplane crash near Gander, Newfoundland.

In August 1990, the 101st Airborne Division (Air Assault) deployed to the Middle East in support of Operations Desert Shield and Desert Storm. During the Liberation of Kuwait, the Division fired the first shots of the air war, and conducted the longest and largest air assault operations to date, securing Iraqi territory in the Euphrates River Valley. With announcement of the Safwan cease-fire in February, 1991, the 101st began redeployment preparations. By May 1991, the Screaming eagles were home.

The 1990s was a busy time for the 101st Airborne Division (Air Assault) seeing numerous deployments in support of stability and support operations world-wide. Fort Campbell-based units were deployed to Somalia, Haiti, the Sinai Peninsula, Central and South America, Bosnia, and Kosovo.

In the wake of the 9-11 terrorist attacks, elements of the Division quickly deployed to protect susceptible facilities in the United States from potential attack. Almost immediately, the 3rd Brigade Combat Team deployed to Afghanistan in November, 2001. In March 2002, the Rakassans were, in part, responsible for offensive operations in the Shoh-I-Khot Valley that dealt a crippling early blow to the Taliban and al-Qaeda. After a challenging six-month deployment, 3rd Brigade redeployed to the United States.

In February and March 2003, the Division deployed to Kuwait in anticipation of combat operations against Saddam Hussein’s regime. In a grueling air and ground movement of 570 kilometers through hostile territory and intense combat in urban areas, the Division exhibited its flexibility, lethality and firepower at every turn. Fighting its way from Najaf, through Karbala and Hillah, the Division eventually consolidated in Southern Baghdad in mid-April, 2003. Ordered to Northern Iraq shortly thereafter, the Division conducted the longest air assault in history and quickly assumed responsibility for Mosul, Iraq’s second largest city, and the four surrounding provinces. In the months that followed, the Division concentrated on the goals of re-establishing security, the restoration of basic services, and reconstruction of civilian infrastructure. During this period, the Screaming Eagles underwrote the completion of 5,000 reconstruction projects, killed Uday and Qusay Hussein, and captured over 500 anti-Coalition insurgents.

The Division redeployed to Fort Campbell in early-2004. During the year that followed, the 101st Airborne Division (Air Assault) fully recovered and completely reorganized under the new Army Transformation Organizational structure in anticipation of its second deployment to Iraq.

In November 2005, the Division Headquarters, the 1st and 3rd Brigade Combat Teams, and the 101st Combat Aviation Brigade deployed to Iraq for a second time. As Task Force Band of Brothers, the Division assumed responsibility for the northern half of Iraq; the largest area of operation in the country. Partnered with four Iraqi Army divisions, the Screaming Eagles focused their efforts on developing credible Iraqi Security Force units that were capable of independent counter-insurgency operations. This monumental effort resulted in vastly improved security and the transfer of several areas to Iraqi control prior to the Division’s redeployment in October, 2006. Under the new modular structure, 2nd and 4th Brigade Combat Teams and the 159th Combat Aviation Brigade were attached to other Multinational Division or Multinational Force commands elsewhere in Iraq.

Fort Campbell entered the final phases of the Army’s historic modular transformation in late 2006. In this phase, the XVIII Airborne Corps shed its peacetime command responsibilities for the 101st Airborne Division (Air Assault) — a relationship that began prior to the 1944 invasion of Holland, and the Division became a direct reporting unit to Forces Command. Additional command and control changes saw Fort Lee, Virginia’s 49th Quartermaster Group join the Fort Campbell family.

Late-2007 saw the majority of the Division deployed again. The Division’s 1st, 2nd, and 3rd Brigade Combat Teams and elements of the Sustainment Brigade deployed independently to Iraq where each served under the command of different Multinational Divisions then conducting combat operations throughout Iraq. Soldiers of the 49th Quartermaster deployed to both Iraq and Afghanistan to support combat and combat support operations. The 101st Combat Aviation Brigade deployed to Afghanistan and was eventually relieved by the 159th Combat Aviation Brigade.

In March 2008, the Headquarters (and Special Troops Battalion) 101st Airborne Division (Air Assault) joined the 4th Brigade Combat Team and the 101st Sustainment Brigade in Afghanistan in support of Operation enduring Freedom. As Combined Joint Task Force 101 (CJTF-101), the Division Headquarters was supported by many attached Coalition units and was responsible for an area of operation the size of Pennsylvania designated as Regional Command-East. Composed of 14 provinces, including much of the volatile border region between Afghanistan and Pakistan, as well as the Hindu Kush and Afghan Control Highlands, Regional Command-East were posed unique and difficult set of challenges unlike anything previously experienced.

The Soldiers of CJTF-101 thrived in their role as both Soldier/diplomats and warriors. CJTF-101 helped restore the Afghan people’s confidence and trust in their government, while improving their quality of life through more than 2500 innovative development projects. As warriors, CJTF-101 aggressively trained Afghan National Security Forces (ANSF) and, side-by-side, relentlessly pursued insurgent groups wherever they could be found.

The Division’s effort in Afghanistan resulted in successful and decisive operations at every level producing a significantly improved Afghan National Security Force committed to the defense of their country. Similarly, Screaming Eagles in Iraq measurably improved the quality of life of the Iraqi people and their trust in the Iraqi Army. Every Screaming Eagle should be proud of their efforts to assist Afghanistan and Iraq to resume their rightful place among the peaceful community of nations.