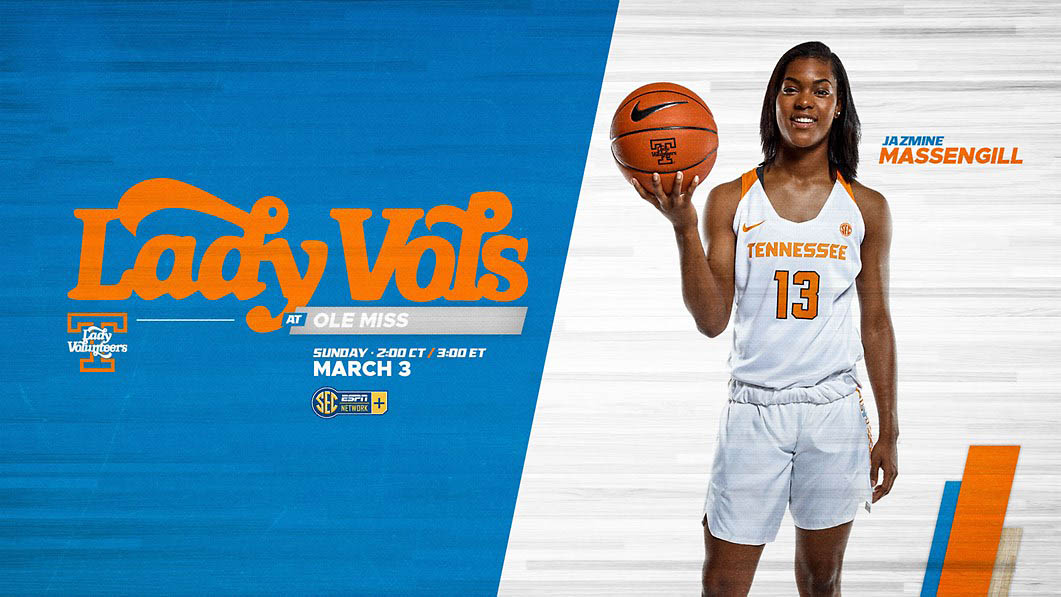 After winning five of six, UT has hit a bump in the road and has dropped three straight, including back-to-back home games vs. #13/13 South Carolina and Vanderbilt. The Commodores spoiled the Lady Vols’ Senior Night on Thursday, overcoming a 10-point deficit to get their first-ever win in Knoxville, 76-69. 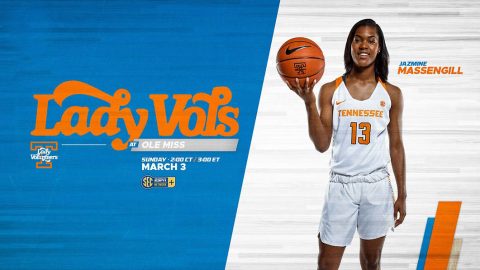 Tennessee currently sits in 10th in the SEC standings at 6-9 and could move to eighth with a win on Sunday and losses by No. 8 LSU (7-8) and No. 9 Arkansas (6-9). UT defeated LSU during the regular season but lost to Arkansas.

Ole Miss, meanwhile, sits in 12th place in the league at 3-14. The Rebels enter with a losing streak of their own, having dropped four straight and nine of their last 10. On Thursday night, Ole Miss was in Tuscaloosa and nearly got the win over Alabama before falling, 46-43.

LVFL Ariel Massengale is in her second season as a graduate manager at Ole Miss. Massengale played in 122 games at Tennessee from 2011-15, averaging 9.5 points and 4.3 assists per contest as a point guard.

Seth Austin (play-by-play) and Lindsay Roy (analyst) will have the call for the SECN+ broadcast.

Re Is Golden AT The Line
Rennia Davis is having one of the finest seasons at the free throw line of any Lady Vol in history. She currently is fifth with a percentage of .887 and has missed only one free throw in 30 attempts since Jan. 10. Davis is shooting .925 in conference games.

Consistent Point-Producer
Davis also is a consistent scorer, hitting double figures a team-high 22 times, including the past nine games.

London Rising
Cheridene Green has doubled her scoring and rebounding averages in all games from 4.1 and 3.7 last year to 9.1 ppg. and 7.6 rpg. this season. She’s been even better in SEC games, producing 10.1 ppg. and 8.9 rpg.

So Much Better At The Line
UT has improved its free throw shooting so much this year, hitting at a .675 rate in the non-conference schedule and warming up to a .722 percentage in league play.

Youngsters Have The Ball
All three of Tennessee’s youthful primary ball handlers have recorded more assists than turnovers this season. The players and their numbers: sophomore Evina Westbrook (138/86), freshman Zaay Green (65/50) and freshman Jazmine Massengill (41/27).

What It Takes To Win
Tennessee is allowing only 61.8 ppg. in its six SEC wins this season and surrendering 77.7 ppg. in its league losses. UT also is standing at +14.5 in rebounding and shooting .784 at the free throw line in conference victories while possessing a +4.4 board edge and a .673 free throw rate in SEC losses.

Redshirt senior Cheridene Green posted a career-high 20 points, but it wasn’t enough to overcome a Vanderbilt team that shot 53.8 percent from the floor, handing Tennessee a 76-69 loss at home on Thursday night.

In addition to Green, sophomore Rennia Davis and freshman Mimi Collins were also in double figures for Tennessee (17-11, 6-9 SEC) with 14 each. Collins’ total was a career high, while Davis posted her 21st double-figure scoring effort of the season.

Vanderbilt (7-21, 2-13 SEC) was led by Mariella Fasoula, who finished the night with 19 points and a game-high nine rebounds. She was joined in double digits by Chelsie Hall with 14 and Cierra Walker with 16.

The Lady Vols have won 18 straight over the Rebels in Knoxville, with the last Ole Miss victory (69-65) coming on January 31st, 1987, in Stokely Athletics Center.

This game marks only the second time in series history that both teams entered unranked.

Tennessee has been unable to reach 70 points in six of its last seven trips to Oxford, but its defense in those games helped the Lady Vols go 6-1 during that span.

Sophomore Rennia Davis has had the most success vs. Ole Miss among current players, tallying 18 points and eight rebounds last season.

Ole Miss has taken on six ranked opponents so far this season, including UConn in the Paradise Jam at the U.S. Virgin Islands (L, 50-90).

Redshirt senior Crystal Allen leads Ole Miss with 17.9 ppg. and averages 3.1 rebounds a game. She currently ranks third in scoring in the SEC.

Head coach Yolett McPhee-McCuin is in her first year at the helm and previously coached at Jacksonville University.

The Rebels were knocked out of the SEC tournament with a 59-50 loss to Missouri in the second round.

Junior Madinah Muhammad led the team during the season by averaging 16.8 ppg. She transferred to North Carolina following her three seasons at Ole Miss.

Alabama handed Ole Miss its 12th SEC loss this season by a tight score of 46-43. The Rebels weren’t able to convert on a game-tying three-pointer in the final seconds of regulation.

Despite a rough day shooting, the Rebels led throughout the first half, entering halftime with a 22-16 lead after forcing nine Crimson Tide turnovers.

Redshirt senior Crystal Allen led the Rebels with a game-high 20 points, marking the fifth-straight game she has led the team.

Senior Jaime Nared recorded her eighth double-double of the season against the Rebels with 15 points and 10 boards.

UT held the Rebels to just 37 percent shooting and finished the game with a 20-4 edge in fast-break points.

Despite overcoming a 12-point deficit in the first half and leading by as many as 13, Tennessee couldn’t close it out in a 67-62 loss to the Rebels at The Pavilion at Ole Miss.

Redshirt junior Diamond DeShields recorded her third double-double of the season with 13 points and 12 rebounds, which tied a career high.

Junior Jaime Nared posted a dominant performance, scoring a then career-high 23 points to go along with seven rebounds.


SEC Tournament Is Next For Tennessee Lady Vols

The 2019 SEC Women’s Basketball Tournament gets under way on Wednesday morning in Greenville, SC, at Bon Secours Wellness Arena and runs through Sunday.

UT currently is the No. 10 seed and would play on Thursday if things stand. There is, however, room for UT to climb as high as No. 8 or drop as low as No. 11 pending the results of Sunday’s games.

This marks the third time Greenville has hosted the event. It was there in 2005 and 2017 as well.