Behind 44 points from Heather Butler on the Skyhawks’ Senior Day, the Lady Govs saw their Ohio Valley Conference Tournament hopes evaporate in a 116-85 defeat.

Coupled with SIU Edwardsville’s win at Eastern Illinois, the Lady Govs (9-20, 6-10 OVC) find themselves on the outside looking in after ending the year on a six-game slide.

UT Martin (22-7, 15-1 OVC), which long ago wrapped up the OVC regular season crown and top seed in next week’s tournament in Nashville, sent its senior class off with the highest-scoring day by an OVC team since 2006-07.

The Lady Govs controlled action in the first half much the same way they did in the January 6th meeting in Clarksville. Austin Peay led by as much as six in the first half and did not trail until 8:53 remaining in the period.

However, fouls plagued the Lady Govs for much of the half, with senior Nicole Olszewski and sophomores Tiasha Gray and Jennifer Nwokocha picking up three apiece. 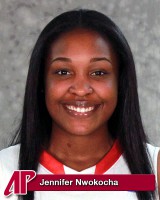 “Without Tiasha and Nicole, we just tried to maintain,” said head coach Carrie Daniels. “We didn’t want to dig ourselves a hole, which unfortunately happened. As a team, we didn’t handle that situation the way we needed to.”

Senior Jasmine Newsome scored 19 points and added seven assists for the Skyhawks in the first half. With Gray limited due to foul trouble, freshman Beth Rates led the Lady Govs with 12 points on 6-for-10 shooting during the game’s opening 20 minutes.

But as good as the Skyhawks were in the first half, they were better in the second. UT Martin scored 59 points in the second half, hitting 61.1 percent (22-for-36) from the field behind 29 second-half points from Butler.

She finished with 44 – the most by an Austin Peay opponent since Tacarra Hayes scored 39 for Tennessee Tech, January 21st, 2010 and the first 40-point performance since Tennessee Tech’s Janet Holt scored 40 in the 2002 OVC Championship game against the Lady Govs. She tied Newsome’s school record with nine made threes, most against Austin Peay since Morehead State’s Chynna Bozeman hit nine on January 31st, 2010.

“Newsome and Butler are unbelievable, not just for what they’ve done for UT Martin, but for the OVC as well,” Daniels said. “There’s a reason they’re going for a fourth title. You’ve got to tip your hat to them.”

Austin Peay would get the lead under 10 just once in the second half, cutting it to eight after an 8-0 run featuring a Nwokocha lay-up and back-to-back threes from junior Kristen Stainback.

With her teammate putting on a shooting display for the ages, Newsome was more of a distributor in the second half – she finished with 25 points and a school-record 14 assists in the contest for her season’s sixth double-double.

Stainback poured in 16 points for the Lady Govs, including four three-pointers, in the second half, finishing with 21 for the game after netting a career-high 34 points the last time out against the Skyhawks. Rates finished with 16 points and nine rebounds, narrowly missing a second straight double-double. Gray chipped in with 19 points, seven rebounds and five assists.

“With some of the numbers we had today, we put ourselves in a position to win,” Daniels said. “It’s disappointing, but I hope for the players that return, this will inspire them to start work right now on next year. There’s so much to look forward to.”

The loss not only concludes the season but the Austin Peay careers of Nicole Olszewski and Lauren Yarbrough.