Clarksville, TN – With the 2014 calendar coming to an end this week, there were several highlights over the past 12 months for the Austin Peay Athletic Department, but topping the list has to be the NCAA Championship appearances by Marco Iten in Men’s golf and Breigh Jones in women’s outdoor track and field.

Iten, a senior, would start his run to the NCAA men’s golf championships by winning Ohio Valley Conference medalist honors by a shot, which earned his a spot in the NCAA Regional in Auburn, AL. 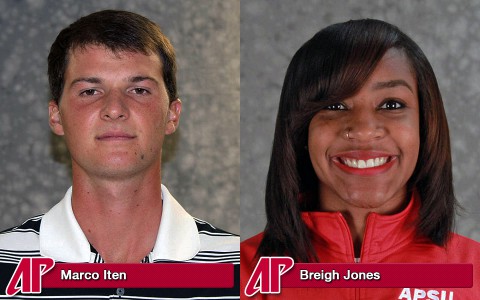 It would be at the Auburn Regional where Iten hit his zenith, as he won going away shooting a 5-under par round on the final day to finish the event at 8-under overall – four shots better than the runner-up – and earning a spot in the NCAA final at Hutchinson, KS.

Jones, a sophomore, qualified for the NCAA Regional in Jacksonville, FL with a OVC gold-medal winning time in the
400 meters at 54:08 – making the top-48 times in the country needed to qualify for a regional spot – ranking 42nd overall in the country.

At the Regional, Jones ran a 52.82 to reach the finals and one there ran a time of 52.65 to set the OVC record, while earning a spot in the NCAA Championship at Eugene, OR, with a seventh-place finish to make the top 24 in the nation.

At the NCAA finals, the first by a Lady Govs track and field athlete since 2001, Jones finished seventh in her heat – with a time of 53.77 – and 20th overall in the championships.

Baseball–Alex Robles was selected for three different Freshman All-America teams, as well as being named the OVC’s Rookie of the Year and second-team All-OVC pick.

Robles was also selected to the National Collegiate Baseball Writers Association All-Freshman team and to the Baseball America Freshman All-America First Team and along with teammates Dre Gleason, Logan Gray, Bredlau and Smith.

Softball—Senior Lauren de Castro earned First-Team All-OVC honors for the third time – the second Lady Gov in the programs history to be so honored.

Cross Country—The Governors won their first in-season meet since 2011, when they won the JSU Foothills Invitational.

So as the calendar nears the start of 2015, here’s to more success for the Governors and Lady Govs in the new year, as they continue to compete on the field of competition against the best in both the OVC and NCAA.