Washington, D.C. – National pump prices have fallen for 43 of the past 44 days, dropping 22 cents during this span. The national average price for regular unleaded gasoline sits at $2.21 per gallon, which is the lowest mark since April and the lowest price for this date since 2004.

With abundant fuel supplies across the nation and declining crude oil costs, gas prices dropped in 47 states over the past week, led by double digit drops in several Midwestern states.

Gas prices have dropped in 48 states during the previous month with prices down by at least 25 cents per gallon in Illinois, Ohio, Kentucky, Indiana, and Michigan.

Prices are substantially lower than one year ago in every state, headlined by California, where prices are more than a dollar cheaper than this time last year.

Today’s most common price in the country is $1.999 per gallon, and more than one-third of gas stations nationwide are selling gasoline for $2.00 per gallon or less. This is substantially higher than the seven percent of stations at or below this threshold a month ago and the fractions of percent that broke this mark a year ago.

Gas prices are likely to remain low for the remainder of the summer compared to recent years. U.S. crude oil supplies are at their highest level for this time of year in 86 years, although domestic oil production has ticked lower each of the past nine months. While oil production has slowed slightly, fuel production has continued to rise. 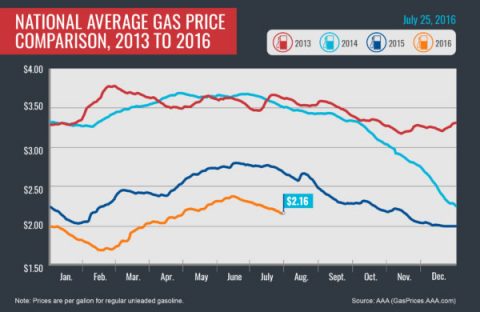 This is supported by data from the American Petroleum Institute, which last week reported fuel deliveries for June were three percent higher than 2015 and the highest number in nine years. Overall, domestic deliveries are 1.7 percent higher during the first half of 2016 than the same period last year, which is in line with AAA reports of travelers taking advantage of lower gas prices and hitting the roads in record numbers this year.

Despite the lowest seasonal prices in 12 years, it’s important to note the possibility that unexpected events could trigger higher prices later this summer. For example, crude oil costs could rise due to disruptions in supply, stronger than expected economic growth or geopolitical tensions overseas. In addition, regional prices could increase due to refinery problems, production cuts, stronger than anticipated demand, or hurricanes that impact distribution and production.

Last year, following a number of unexpected refinery issues in California, gas prices surged during the peak driving season across the region. This year there have been relatively few refinery issues, which has helped prices remain low versus a year ago.

Gas prices in the Rocky Mountain region continue to be insulated from refinery issues and are among the most stable prices in the nation.

Over the past week prices have moved by a penny or less in five states: Wyoming, North Dakota, Idaho, Utah, and Montana. Even over the past month, prices in these states have remained flat with prices dropping only a few cents per gallon over this span.

As is often the case, gas prices in the Great Lakes region are the most volatile in the nation. At the moment drivers are enjoying this distinction, as prices are dropping on abundant supplies and limited disruption to production. This region includes the five states registering the largest declines in the nation over the past week: Indiana (-15 cents), Ohio (-12 cents), Michigan (-12 cents), Illinois (-10 cents), and Missouri (-8 cents).

Midwestern declines are also featured in the top month-over-month comparisons, with every U.S. state that is posting a decline of 20 cents or more in this region: Illinois, Ohio, Kentucky, Indiana, Michigan, Wisconsin, and Missouri. On top of these weekly and monthly savings, drivers in the Central United States continues to pay some of the cheapest gas prices in the country with Oklahoma ($1.94), Tennessee ($1.93), and Missouri ($1.92) all featured in the top five cheapest state averages.

Gas prices across the Mid-Atlantic and Northeast continue to drop, and average prices in both Virginia and New Jersey are now below $2 per gallon and could be joined by Delaware before the week is over.

Gas prices in much of the South and Southeast remain near or below $2.00 per gallon. Motorists in South Carolina, Alabama, Mississippi, Arkansas, and Louisiana are already enjoying an average price below this threshold, and drivers in Georgia and Texas could join this list in the next several days.

The bulk of America’s refining capacity is in the Southeastern United States, and abundant production should keep prices relatively low unless there is an unexpected disruption to supply, such as a major hurricane.

With domestic supplies at their highest seasonal levels in decades, a stronger U.S. dollar, and an uptick in the number of U.S. oil rigs, West Texas Intermediate crude oil is trading at its lowest price since early May. Many analysts have predicted oil prices could drop even further later this year, which would likely lead to lower gas prices for consumers heading into the fall. At the close of Friday’s formal trading session on the NYMEX, WTI was down 56 cents to settle at $44.19 per barrel.

Drivers can find current gas prices along their route with the free AAA Mobile app for iPhone, iPad and Android. The app can also be used to map a route, find discounts, book a hotel and access AAA roadside assistance. Learn more at AAA.com/mobile