Nashville, TN – The Tennessee Titans (0-0) begin the 2016 preseason this week against the San Diego Chargers (0-0). Kickoff at Nissan Stadium (capacity 69,143) is scheduled for 7:00pm CDT on Saturday, August 13th. The contest is a preview of the two teams’ November 6th regular season meeting in San Diego.

The game will be televised regionally on the Titans Preseason TV Network, including flagship WKRN News 2 in Nashville.

Play-by-play announcer Dan Hellie and analyst Charles Davis will call the action, and Kara Hammer will report from the sidelines.

In taking the field against the Chargers, the Titans will usher in a new era in their history, as head coach Mike Mularkey and general manager Jon Robinson embark on their first preseason in their respective roles.

Mularkey, who is in his 31st season in the NFL (nine as a player and 22 as a coach), served the final nine games of 2015 as the interim coach before he was named to the job on a full-time basis in January.

Robinson spent the last two seasons as director of player personnel for the Tampa Bay Buccaneers following a 12-year stint in the scouting department of the New England Patriots, including five seasons (2009–2013) as their director of college scouting.

In the six months since Mularkey and Robinson were hired, the makeup of the team has undergone significant turnover. Currently, 36 of the 90 players on the active roster and physically unable to perform list (40 percent) were not on it in 2015.

One of the biggest names scheduled to don the two-tone blue for the first time this week is running back DeMarco Murray. The two-time Pro Bowl selection and 2014 NFL Offensive Player of the Year was brought to Tennessee in March in a trade with the Philadelphia Eagles. In the last five seasons, Murray ranks sixth in the NFL in rushing yards (5,228), fifth in avg./rush (4.6), sixth in scrimmage yards (6,750) and seventh in rushing touchdowns (34).

Mariota, the second-overall draft choice a year ago, set Titans rookie passing marks for attempts (370), yards (2,818), completions (230), touchdowns (19) and passer rating (91.5). Only Steve McNair in his MVP season of 2003 (100.4 passer rating) and Hall of Famer Warren Moon in 1990 (96.8) finished with a better passer rating in a Titans/Oilers season than Mariota did in 2015. His 62.2 completion percentage not only set the franchise rookie record but also qualified as the fifth-highest rookie percentage in NFL history. 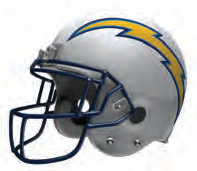 The Chargers enter their fourth season under head coach Mike McCoy, who led his team to back-toback 9-7 finishes in his first two seasons, including a playoff berth in 2013. Like the Titans, the Chargers are looking to take a big leap forward in 2016 after finishing 4-12 in 2015.

Chargers quarterback and Decatur, AL, native Philip Rivers is beginning his 13th NFL campaign, all of which have been in San Diego. The 6-foot-5, 228-pound signal caller set team records in 2015 with 661 attempts and 437 completions while passing for 4,792 yards, the second-highest total in franchise history.

Titans-Chargers Series at a Glance

The Titans and Chargers share a long and storied history. The two teams, founding members of the American Football League who originally existed as the Houston Oilers and Los Angeles Chargers, have met 44 times since 1960. The Chargers lead the series 26-17-1.

On September 18th, 1960, the two clubs met for the Oilers’ inaugural home game at Houston’s Jeppesen Stadium. The Oilers won that match-up 38-28. In November of that same year, the Chargers won the rematch in Los Angeles, 24-21. The AFL’s top two teams would meet once more that season—a rubber match for the first-ever AFL Championship. The Oilers were victorious at home, rejoicing in a 24-16 win that earned each member of the team an extra $1,016.42.

The following season, they met again for the AFL crown, and the Oilers again were the victors in a 10-3 final. They would clash twice more in the playoffs, first in a 17-14 Oilers win in a 1979 Divisional contest. Following the 2007 season, the Chargers hosted the Titans in a Wild Card matchup and earned their first victory in the postseason series, winning 17-6. It was part of the Chargers’ current eight-game winning streak against the Titans, dating back to 1993.

The Titans and Chargers last met at Nissan Stadium on September 22nd, 2013. In one of the more dramatic finishes in the history of the venue, Jake Locker launched a 34-yard touchdown pass to Justin Hunter with 15 seconds on the clock in the fourth quarter to give the Titans a 20-17 win.

Jake Locker completed a 34-yard touchdown pass to Justin Hunter with 15 seconds remaining in the fourth quarter, giving the Titans a dramatic 20-17 win over the Chargers at Nissan Stadium (then LP Field). The Titans scored 10 points in the final six-and-a-half minutes, beginning with a 37-yard field goal by Rob Bironas that cut San Diego’s lead to 17-13.

The Chargers then ran nearly four minutes off the clock with six consecutive running plays. But a holding penalty helped stall the drive, and Mike Scifres was brought on to punt.

On the punt return, the 11th and final penalty of the game was called on the Titans for an illegal block—it was their first penalty of the second half after having 10 in the first half—which backed up the Titans to their own six yard line with 2:05 on the clock.

With no timeouts remaining, Locker went to work quickly, getting into Chargers territory with passes of nine and 16 yards to Kendall Wright, 11 yards to tight end Delanie Walker and nine yards to Damian Williams.

A four-yard dump off to Michael Preston was followed by an 11-yard completion to receiver Nate Washington, giving Washington a team-high eight catches and 131 receiving yards.

Then, on third-and-10 from the 34-yard line, Locker lofted a pass to Hunter in the near right corner of the end zone. Hunter, a rookie who had never before caught a pass in the NFL, outleaped cornerback Crezdon Butler for the winning score.

The Titans totaled 452 yards in the contest, while their defense limited the Chargers to 277 yards and three-of-nine on third down.

Locker finished the game with 367 combined yards passing (299) and rushing (68). He completed 23 of 37 passes for 299 yards without throwing an interception. The Titans needed his production to counteract the performance by Chargers quarterback Philip Rivers, who was 20 of 24 for 184 yards, a touchdown and no interceptions.

Rivers helped the Chargers jump out to a 7-0 lead on their first possession. After taking over at the Tennessee 49-yard line, they took six plays to score the game’s first points, a seven-yard touchdown pass from Philip Rivers to tight end Antonio Gates.

Early in the second quarter, the Titans cut into the lead with a 20-yard field goal by Rob Bironas. The 11-play, 90-yard drive took nearly five minutes and featured runs of 39 and 10 yards by Locker and 23 yards by Chris Johnson. Johnson rushed for 90 yards on 19 total carries for the
game.

Midway through the second quarter, the Titans were forced to punt from their own 46-yard line. However, Brett Kern mishandled the snap from Beau Brinkley and was tackled at the 30-yard line.

The Chargers took over and extended their lead. An offensive pass interference penalty negated an Eddie Royal touchdown catch, and that was followed by an unsportsmanlike conduct penalty on Rivers. Finally, Nick Novak made a 44-yard field goal to make the score 10-3.

The Titans took the ensuing kickoff and marched 76 yards, including a 17-yard reception by Walker and a 16-yard catch by Washington. Finally, on the eighth play of the drive, Locker ran for a seven-yard score with a minute remaining in the half.

With the score tied, the Chargers went into their two-minute offense, and Rivers took his team down the field to the 20-yard line. However, Novak’s 38-yard field goal attempt as time expired in the second quarter was blocked by Titans safety Bernard Pollard.

In the third quarter, after Bironas missed a 43-yard field goal attempt, the Chargers regained the lead. Five plays following a 34-yard pass from Rivers to tight end Ladarius Green, running back Ronnie Brown scored on a one-yard carry.

The score remained 17-10 until the fourth quarter. At the conclusion of an 11-play drive that included a 17-yard reception by Washington on fourth down, Bironas connected on his second and final field goal, setting the stage for Locker’s heroics.