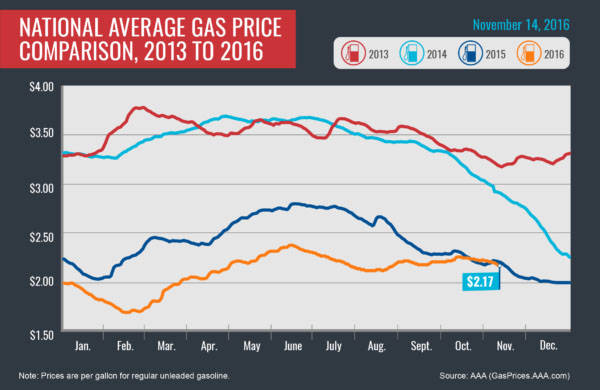 Tampa, FL – Pump prices have fallen for 10 consecutive days, reaching today’s national average price of $2.17 per gallon. Drivers are benefiting from the price of retail gasoline with today’s average five cents less per gallon than one week ago and eight cents less than one month ago.

The abundance of crude oil in the global market is contributing to lower prices, and as a result, retail averages are the same price as compared to one year ago. 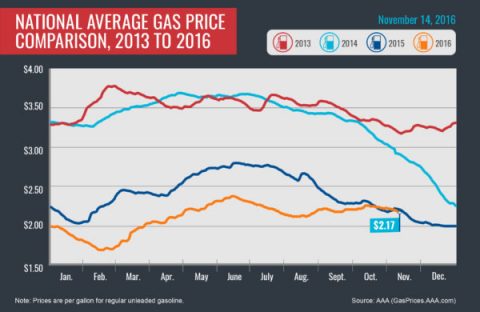 Historically, gasoline demand tends to decline during the month of November, and with the autumn refinery maintenance season nearing completion, pump prices are expected to move lower to close out the year, barring any unanticipated outages or supply disruptions.

These decreases are making their way to the pump nationally and resulting in weekly discounts in west coast markets with the most significant decreases found in Washington (-4 cents), Oregon (-4 cents) and California (-4 cents).

Retail averages in the Rocky Mountain states are following the national average downward, moving between 1-3 cents on the week in most parts of the region. Montana (-5 cents) is the only state posting a savings of a nickel or more. Gas prices in the region are below the $2.50 per gallon benchmark and are expected to continue to drop as we move into the holiday season.

Pump prices in the regions dropped significantly over the past week and continue to be impacted primarily by supply and demand. Although prices are down in every state in the region on the week, Indiana (-14 cents), Ohio (-12 cents), Michigan (-11 cents), Kentucky (-8 cents), Illinois (-8 cents), Nebraska (-7 cents), Oklahoma (-7 cents), Minnesota (-6 cents) and Wisconsin (-6 cents) are all ranked on the nation’s top 10 list of biggest weekly discounts.

OPIS reports that ExxonMobil’s Joliet, IL refinery experienced minor disruptions late last week due to flaring from an upset on process equipment. Despite these reports, this week Ohio ($1.98) and Indiana ($1.96) both landed on the nation’s top-10 list of cheapest markets.

Despite being home to three of the nation’s top 10 most expensive markets—Pennsylvania ($2.40), Washington, D.C. ($2.40) and New York ($2.39)—gas prices in the region are following the national trend downward and remain below the $2.50 per gallon benchmark.

Gas prices are down in every state in the Northeast on the week, with the largest weekly savings experienced by drivers in Washington, D.C. (-5 cents), New Jersey (-3 cents), Rhode Island (-3 cents).

OPIS reports Delta Air Lines restarted the fluid catalytic cracking unit at its 190,000-b/d Trainer, Pennsylvania refinery last week and the Northeast is expected to receive a large import of gasoline from Europe during the second half of the month which should help boost supplies following the six-day shutdown of Colonial Pipeline earlier this month. Pump prices in the regions should continue to drop heading into the holiday season.

Gas prices in much of the South and Southeast remain near or below $2.00 per gallon. Motorists in Arkansas, Texas and Mississippi are already enjoying an average price below this threshold, and drivers in Alabama, South Carolina and Louisiana could join this list in the next several days.

OPIS reports that there was a backup of gasoline supplies in the Gulf Coast due to the Colonial Pipeline shutdown earlier this month.

The shutdown prevented refiners from moving product to Southeast and Mid-Atlantic states and resulted in higher gasoline stores and drops in prices at the pump. The bulk of America’s refining capacity is in the Southeastern United States and abundant supplies should keep prices relatively low heading into the holiday season, barring any unexpected disruptions in pipeline shipment or refinery schedules.

Global crude oil supply continues to outpace demand, which for now, is keeping a ceiling on prices. Traders are also watching supply and demand levels as OPEC and non-OPEC countries continue their production cut discussions ahead of their formal meeting on November 30th in Vienna, Austria.

Decisions made at the formal meeting may impact available crude levels and in turn be reflected in retail prices. The WTI opened this week’s trading session posting losses, building on last week’s decline due to continued supply worries. At the closing of Friday’s formal trading session on the NYMEX, the WTI was down $1.25, settling at $43.41 per barrel.

Motorists can find current gas prices along their route with the free AAA Mobile app for iPhone, iPad and Android. The app can also be used to map a route, find discounts, book a hotel and access AAA roadside assistance. Learn more at www.AAA.com/mobile