UT makes its way to the Magnolia State with the momentum of a three-game winning streak, forged with victories over LSU, Florida and Vanderbilt. The Lady Vols won their 10th straight in the series vs. the Commodores last Sunday, defeating Stephanie White’s club, 82-65, at Memorial Gymnasium. 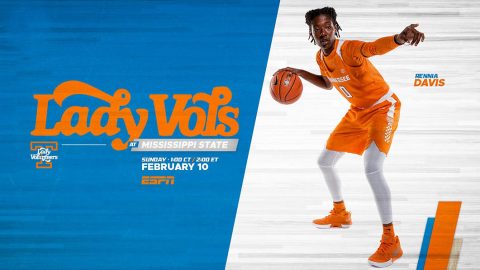 MSU, meanwhile, is riding an 11-game streak of triumphs after suffering its only loss of the year on December 18th at Oregon, 82-74. Last Sunday, State prevailed by 16 at Alabama, 65-49.

It was the team’s fourth-lowest margin of victory in SEC play behind 15 at home vs. Kentucky and South Carolina, and nine at home vs. Georgia.

In four of the Lady Vols’ five SEC losses, they fell by a combined total of nine points, including a one-point loss to Arkansas, two-point setbacks to Missouri and Kentucky, and by four points at Georgia.

Tennessee is 4-2 on the road this season, including 2-2 in SEC play. UT won at Auburn and Vandy, while falling at Georgia and Alabama in back-to-back games on January 13th and 17th.

MSU has the edge in experience, with four seniors and a sophomore in the starting lineup compared to UT’s senior, three sophomores and a freshman.

Roy Philpott (play-by-play) and Brooke Weisbrod (analyst) are on the call for ESPN.

This marks the 42nd meeting between the Lady Vols and MSU, with UT possessing a 37-4 record in the series.

Tennessee won the first 36 games in the series, dropped three straight to the Bulldogs and then won one in Starkville and lost one in Knoxville.

Including this game, MSU has been the higher ranked team in the past six games, entering this one with a 4-1 edge over UT.

The Bulldogs were ranked in the top four nationally in the three previous meetings to this one.

The Lady Vols were unable to defend their home court last season, falling, 71-52, on January 21st.

After bursting to an 8-0 record and standing 12-1 after opening SEC play with a win at Auburn, a youthful Lady Vols team (7 of 10 active players are freshmen and sophomores) has gone through some growing pains.

Losing four of the games by a combined nine points, UT dropped five consecutive league tilts before bouncing back with wins over LSU, Florida and Vanderbilt.

UT also fell to Notre Dame during the midst of that SEC skid, 77-62, in a game the Lady Vols led at the half by three en route to their sixth straight loss.

That game, however, seems to have been a turning point for this team.

After seeing Davis mired in a four-game slump, she has reemerged as a go-to player, firing in 24, 19 and 17 points in the past three games, all victories.

Jackson had suffered a performance lull as well after hitting double figures in 10 of her first 13 games, including a 27-point effort at Auburn.

The senior missed two games (N.D., LSU) after injuring an ankle vs. Arkansas, and she carded her first double-figure scoring game since Jan. 3 when she fired in 17 vs. Vanderbilt to get back on track.

Center Kasiyahna Kushkituah scored in double figures in four of her first five games this season before a knee injury forced her to miss three games and limited her mobility in the next 11 outings.

Kushkituah shed a bulky knee brace during the LSU game and finished the day with 14 points and eight rebounds. She followed with six points and six rebounds on 3-of-4 shooting vs. Florida and tallied an 8 and 6 day vs. Vanderbilt to demonstrate consistency in the post.

Senior forward Cheridene Green has pulled down double-figure totals in rebounds in seven of her past nine contests.

Freshman Zaay Green has averaged 11.6 ppg. over the past five contests and yanked down a career-high-tying 11 boards vs. Vandy.

Freshman Mimi Collins hit double figures in points for the fourth time this season and the second time in SEC play when she contributed 10 vs. Vanderbilt. Eight of those came in the fourth quarter.

The Lady Vols went 17-of-20 from the free throw line in the fourth quarter to secure their third straight victory, defeating rival Vanderbilt on Sunday, 82-65, in Memorial Gymnasium.

Freshman Meme Collins also found her way into double digits for Tennessee with 10 points, eight of which came in the fourth quarter.

Vanderbilt (6-16, 1-8 SEC) was led by redshirt junior Mariella Fasoula who had 16 points, eight rebounds and went a perfect 6-of-6 from the free throw line. Chelsie Hall and Autumn Newby each had 11 for the Commodores.

MSU has finished as runner-up at the Final Four the past two seasons and won its first-ever SEC regular season crown in 2017-18.

Last Time Out For Mississippi State

No. 6 Mississippi State turned in dominating second half on the defensive end of the floor to pull away to a 65-49 win against Alabama on Sunday.

In the third quarter, the Bulldogs held the Crimson Tide to just seven points. The Bulldogs forced 12 second-half turnovers.

After Anastasia Hayes made it a seven-point game with a free throw early in the fourth quarter, MSU was able to shut down UT offensively, allowing no field goals over the final eight minutes while closing the game on a 14-2 run.

Jordan Reynolds also had a productive game, tying her career high in points with 17 to go along with eight rebounds and three assists. Victoria Vivians led the Bulldogs with 18 points.