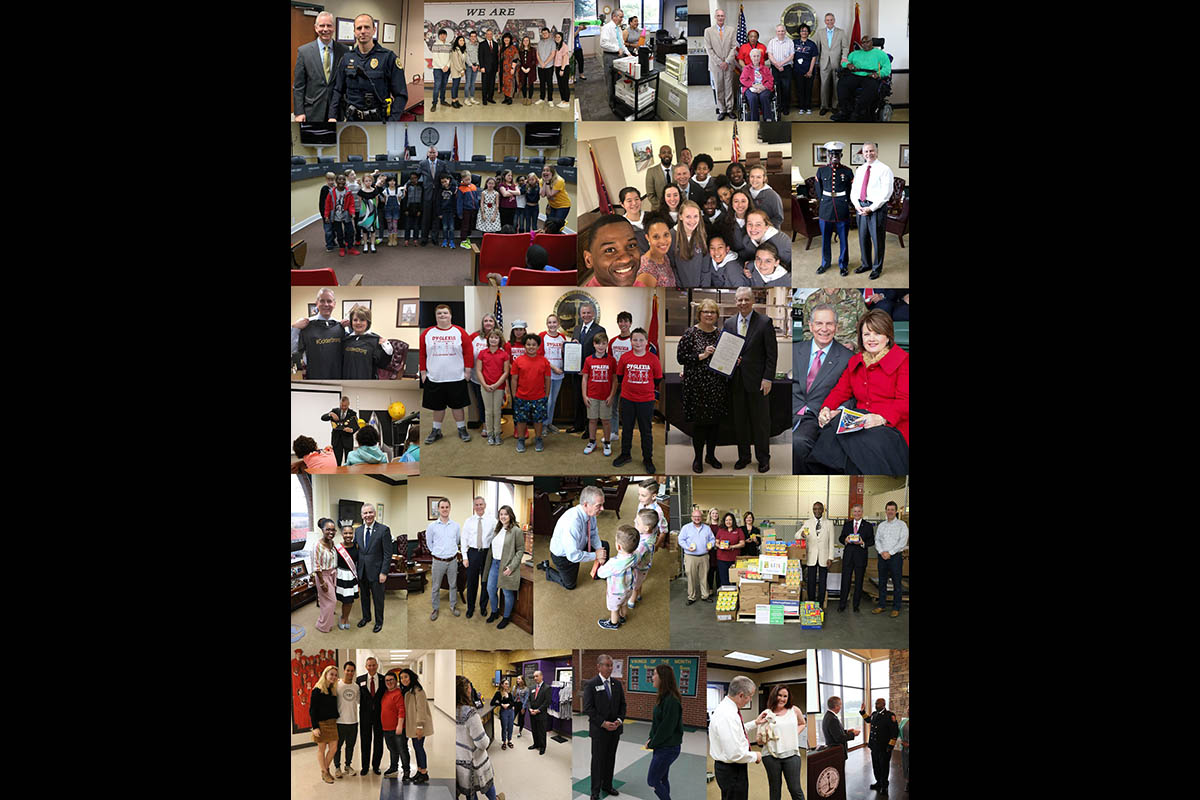 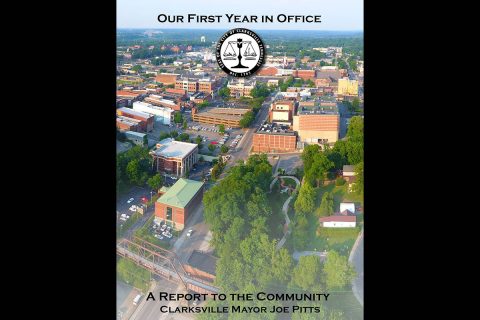 A major challenge of the first year came on Saturday, October 26th, when a storm with 70 mph straight-line winds struck the City, knocking out power for nearly half of CDE Lightband’s customers.

CDE and crews from regional utilities and power contractors worked valiantly for more than a week to restore power to more than 32,000 businesses and residents. The Clarksville Street Department has worked for weeks to pick up and dispose of thousands of tons of trees and limbs that were blown down by the wind.

The storm crisis has led to a rewrite of the City emergency communication response plan and other measures designed to help the City respond more quickly to the next challenge.

Internally, the City family also faced a pair of losses during the mayor’s first year. Two long-term Clarksville Street Department employees lost their lives while on the job serving Clarksville citizens. One worker was stuck by a truck and killed, and another died of natural causes while working. In both cases, Mayor Pitts and numerous city employees reached out to comfort and support surviving family members.

Mayor Pitts’ first year also included dramatic recognition for the community. In August, Money.com — a respected business publication — announced that after a thorough examination based on thousands of data points, Clarksville earned Money’s rating as the Best Place to Live in America.

“Clarksville’s affordability is hard to beat, yet it’s not the only thing that makes the city special,” Money.com said. “There’s a unique charm to the place; it feels like the quintessential small American town. Not only are there small, locally-owned businesses, but public places where residents can go to relax, like the new park at Downtown Commons or the River Walk, whose paved path provides a beautiful view of the Cumberland River at sunset.”

Mayor Pitts, elected in November 2018 and sworn in on January 2nd, 2019, pursued an aggressive early schedule. He and First Lady Cynthia Pitts conducted “Meet and Greet” breakfast sessions with each City department, where he shared his early priorities, which are to ensure the City is: 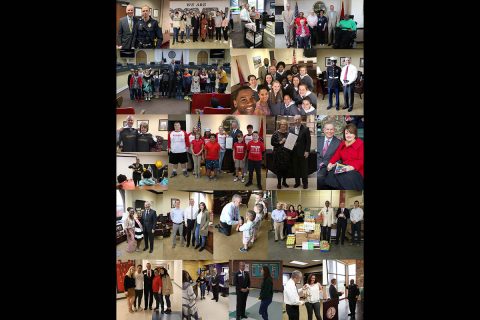 City Department Heads have met with Fort Campbell officials to discuss ways the post and city can collaborate and coordinate service delivery and facilities.

After the announced retirements of Fire Chief Mike Roberts and Clarksville Transit System Director Arthur Bing, both effective at the end of June, the Mayor conducted comprehensive searches for a new Fire Chief and a new CTS Director using committees of citizens and experts to help evaluate candidates.

These successful searches culminated in the appointment of Freddie D. Montgomery Jr. as Fire Chief effective August 1st and the appointment of Paul Nelson as Clarksville Transit Director in November. Montgomery joined CFR after a stellar 25-year career with the Hopkinsville Fire Department, and Nelson takes the helm of CTS after serving as the system’s Interim Director and second in command for several years.

Mark Riggins was named General Manager of Clarksville Gas & Water, after former GM Pat Hickey resigned April 4th. Riggins led the department for several months as Acting GM, and then was promoted to GM in August.

Mayor Pitts’ leadership choices were clearly defined and made public during the annual budgeting process, which was completed in June.

Budget process changes resulted in smooth evaluation and unanimous adoption of $523 million city budget, and a $103 million general fund budget. The 2021 Budget was approved with no increase in the City’s tax rate.

These budget priorities were presented and approved:

Roads
The City’s crowded thoroughfares are one of Clarksville’s pressing issues. Mayor Pitts has quickly gone to work with the City Street Department to complete a 2020 Traffic Study. In February 2020, Mayor Pitts expects to introduce a major plan to tackle the City’s most pressing roadway projects, including new thoroughfares, improvements to key intersections, and addition of sidewalks around schools and other high-pedestrian need areas. This plan will outline costs and funding options available to pay for major road improvements.

The plan will include updates about these key road projects:

Right of way planning and preliminary design on the Northeast Connector, a major city-built roadway to take traffic pressure off of crowded roads such as Wilma Rudolph Boulevard, the 101st Airborne Division Parkway, and Trenton Road.

Progress on the first phase of the project to improve Rossview Road, near the Rossview Schools Campus, closest to the schools complex and Interstate 24.

Clarksville Parks and Recreation
Mayor Pitts plans to move forward with Phase 1 development of more than 300 acres acquired last year at Exit 8 for a new Clarksville Family Athletic Complex. Phase One, which is being designed, will focus on adding soccer and multipurpose athletic fields for youth leagues.

The Tennessee Department of Transportation announced in August that Clarksville will receive a $1.82 million federal Transportation Alternatives Project grant for construction of a pedestrian bridge over the Red River. Clarksville will be responsible for about $675,000 of the total $2.5 million project, including a 20 percent matching amount and all engineering, design and right-of-way costs.

Reacting to a sudden call to duty, Mayor Joe Pitts offered a solemn address to the citizens of Clarksville in June after a double homicide in the parking lot of a local restaurant in the City’s busiest commercial district.

The crime hit home with particular force for Mayor Pitts, who was dining inside the restaurant with a group of friends and family members when the crime occurred outside. Here is part of his statement:

“(Wednesday) night our city experienced a crime that is unfamiliar to us — a double homicide at a local restaurant. According to reports from our police department, rival motorcycle gangs chose to exercise lawlessness and commit cowardly acts.

“Let me pause to commend our first responders who were quickly on the scene. Our Police, Fire and Rescue, and EMS workers were very professional in their approach to attending to the victims, and gathering information from those of us in the restaurant. As a community we can all be proud of them not just for (Wednesday) night but everyday.

“I want to address the citizens of our community. Our first impulse as humans is to panic, or to think this is a beginning to a crime wave. Let me state without hesitation, it is not.

“The actions of a few cowboys on motorcycles who deliberately sought out another human being to kill, are isolated but very unnerving. We don’t expect this sort of thing to happen in our beautiful city. But here we are — facing the reality that it can happen anywhere.

“So (tonight), and the rest of our days, let us resolve to support our police. Support our first responders. And support one another.”

A month later, Mayor Joe Pitts renewed his call for citizens to help police prevent and solve homicides and other violent crimes in Clarksville.

“We have already seen 10 homicides so far in 2019. While the Clarksville Police Department has been effective in solving many of these crimes, we need the public’s help to ensure criminals are caught quickly and brought to justice.”

Throughout his first year in office, Mayor Pitts met regularly with CPD leaders to analyze crime data and discuss ways to engage the public in the City’s crime-fighting efforts.

The Mayor also remained focused on these various topics during his First Year in office:

Communications
Mayor Pitts has expanded the City’s use of Social Media and traditional media and communications to inform and engage the community. A new City website was introduced April 8th.

Other Issues
The Mayor and department leaders are evaluating ways to bring more parking facilities downtown, and another evaluation of a new location for the CTS Transit Center downtown is under way.