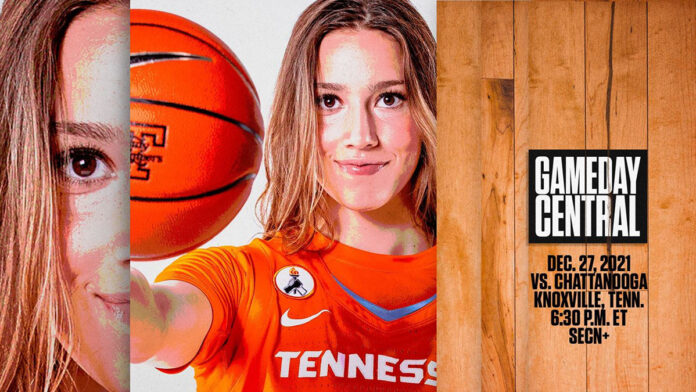 The Lady Vols and Mocs are set to tip-off at 5:32pm CT in Thompson-Boling Arena in a contest that will mark the final tilt before UT embarks on its SEC schedule.

The battle marks the fourth of five consecutive home games during the month of December for UT and the second of two straight match-ups against schools within the Volunteer State and who also are members of the Southern Conference.

Tennessee and Chattanooga enter Monday night’s test after some time at home for winter break. The Lady Vols closed out the first semester with a resounding 112-58 victory over East Tennessee State in Knoxville on December 20th. At 10-1, UT is off to its best start since opening 12-1 in 2018-19.

UTC, meanwhile, comes to Knoxville looking for win number three on the year. The Mocs ended a nine-game losing skid on December 20th when they handled UNC Asheville, 62-51.

Bob Kesling (play-by-play), Madison Blevins Hock (analyst), and Kasey Funderburg (reporter) will be on the call for the SECN+ broadcast.

For additional details and information, please call 865-974-1734 or visit the Fans tab on UTSports.com and click on the Fan Experience link.

The Tennessee women are 254-61-1 all-time vs. four-year college teams from the Volunteer State, and Kellie Harper is 9-0 in those match-ups in her third season on Rocky Top.

The UT Lady Vols are 2-0 this season (wins vs. Tennessee Tech and East Tennessee State) and were 3-0 in 2020-21, with wins over ETSU, Lipscomb, and Middle Tennessee, with two games on the schedule vs. Vanderbilt (home and away) canceled.

UT has won nine in a row over schools from within the state border and 25 of the last 26, with the lone setback during that run being a 76-69 loss to Vanderbilt in Knoxville on February 28th, 2019.

The Tennessee women’s basketball team is one of the nation’s biggest stories of 2021-22, opening up at 10-1 against one of the NCAA’s toughest schedules despite losing returning starters Rae Burrell and Marta Suárez to injuries and opening the season with Jordan Horston on the sideline for a game.

Tennessee is among the nation’s best at rebounding and defending, but its offense is emerging with different members of the team stepping up each game.

Eleven different players have scored in double figures this season, including seven who have done so in multiple games. Kaiya Wynn and Karoline Striplin became the latest with 12 and 10, respectively, vs. ETSU.

The Lady Vols have had at least one player record a double-double in every game through the contest with ETSU, led by Tamari Key with six (including a triple-double), Jordan Horston with five, Alexus Dye with two, and Kaiya Wynn with one.

That gives Tennessee 14 total double-doubles this year, surpassing the total of 13 in all of 2020-21.

UT has shown itself to be a tough, gritty team, coming from behind in the fourth quarter four times this season to win games (Southern Illinois, South Florida, Texas, Virginia Tech). UT also came from 20-down in the second quarter vs. No. 3/3 Stanford, cutting the deficit to three in the second half with a 17-0 run spanning the second and third periods before eventually falling to the Cardinal.

Alexus Dye, a 6-0 forward, is second among active UT players in scoring at 9.8 ppg. She is third in rebounding at 8.5 rpg.

Reserve freshman guard/forward Sara Puckett is UT’s fourth-leading scorer. She is putting up 9.2 ppg. and is shooting 50.7 percent from the field, 40.0 percent on threes, and 81.3 percent on free throws and has scored in double figures in the past four games and in five of the last six.

Freshman point guard Brooklynn Miles is UT’s eighth active player averaging double-figure minutes at 21.7, and she was effective as a ball-handler and defender before becoming a scorer in game nine. She hit for a season-high 11 points vs. Georgia State on December 12th, hitting three of five field-goal attempts.

With career-best and double-figure efforts vs. ETSU, Karoline Striplin and Kaiya Wynn boosted their scoring averages to 4.1 and 3.4 ppg., respectively.

Looking Back At The Last Game

No. 7/9 Tennessee took a commanding victory over in-state foe ETSU on December 28th, winning 112-58 in Thompson-Boling Arena before entering the holiday break.

The score reflected UT’s highest point total since claiming a 131-69 triumph against Troy on December 6th, 2017, and is the most points scored in a single game during head coach Kellie Harper‘s tenure.

Six Tennessee (10-1) players were in double figures, led by freshman Sara Puckett, who turned in a career-high 19. Junior Tamari Key was close behind with 16 points, and Keyen Green finished with 13, while Karoline Striplin set a career high with 10. Freshman Kaiya Wynn recorded her first double-double as a Lady Vol with 12 points and 10 rebounds, and graduate Alexus Dye notched 11 points and 11 rebounds for her second double-double of the season.

Jakhyia Davis was the high scorer for ETSU (1-11) with 17 points, and Aaliyah Vananda tallied 12.

Seeing Double
Freshman Kaiya Wynn and graduate Alexus Dye each recorded double-doubles against the Bucs. At least one Lady Vol has recorded a double-double in every game this season for a team total of 14 on the year.

Balanced Attack
On the night, the Lady Vols had six players in double figures. It marked the first time UT had done that since doing so against Murray State on December 28th, 2018. Every active Lady Vol scored at least two points and grabbed one or more rebounds.

Bench Room
Tennessee’s bench tallied a whopping 74 of UT’s 112 points vs. ETSU. That’s at least the best of the post-Pat Summitt era, with research continuing prior to the 2007-08 season.

This marks the 36th meeting between these University of Tennessee sister schools.

UT leads the series with Chattanooga, 27-8, but the Mocs have split the past four match-ups.

The Tennessee Lady Vols haven’t lost to Chattanooga in Knoxville since 1973.


Tennessee is 68-20-1 all-time vs. teams currently in the Southern Conference, including a 112-58 home victory over East Tennessee State on December 20th.

Kellie Harper and Jon Harper were assistant coaches on Wes Moore’s staff at Chattanooga from 2001-04 before Kellie was named head coach at Western Carolina.

The Chattanooga Mocs enter on a positive note after snapping a nine-game losing skid with a 62-51 win over UNC Asheville before the break.

Cornelius is one of six juniors on a squad featuring no seniors.

The Mocs are led by Katie Burrows, who is 41-56 in her fourth year as head coach.

She spent the previous eight seasons as an assistant at UTC first with Wes Moore and then five seasons with Women’s Basketball Hall of Fame head coach Jim Foster.


Kellie and Jon Harper were assistants at Chattanooga (2001-04) during part of Burrows’ (then Galloway) time there as a player for the Mocs.

Chattanooga put together a pair of runs to start each half and led wire-to-wire on Dec. 20 at The McKenzie Arena, defeating UNC Asheville, 62-51.

Dena Jarrells led all scorers with a career-best 19 points, making 8-of-11 from the field including a pair of 3-pointers. Abbey Cornelius recorded her third double-double of the year with 12 points and a season-best tying 16 rebounds. Brooke Hampel, who experienced early foul trouble, was 6-of-6 from the field with 13 points in just 16 minutes.

After trailing by double figures for most of the night, the Mocs used a late 22-4 run to cut their deficit to two points three times in the fourth quarter. Tennessee was able to hold on, though, thanks to Diamond DeShields’ best game as a Lady Vol. The preseason All-American scored 17 points, including four of her team’s final six.

Sophomore Mercedes Russell scored in double figures for the fourth time in as many games with 13. Senior Bashaara Graves tallied 10 points and 11 rebounds for her third straight double-double.


Next Up For UT Lady Vols Basketball

The Lady Vols and Crimson Tide will tip-off at 5:30pm CT on December 30th in the final game of 2021 for both programs. The contest will be streamed on SECN+.

Facebook
Twitter
Pinterest
Email
Print
Previous articleSubaru recalls over 198,000 vehicles because Drive Chain May Break Causing Loss of Drive Power
Next articleWhy, When, How, to have Wisdom Teeth Removed