Tennessee enters Monday’s showdown after dropping two of its last three games, including a 64-59 upset loss to unranked Arkansas (7-10, 2-2 SEC) on Thursday night.

Notre Dame, meanwhile, has won its past nine games, including a 63-50 road victory over Boston College (12-4, 0-3 ACC) on Thursday evening.

UT will use its SEC bye date vs. the Irish.

The Series Vs. Notre Dame

Tennessee holds a 20-5 all-time record vs. Notre Dame, dating back to November 25th, 1983, but the Fighting Irish have claimed the last five encounters between these programs. The Lady Vols are 8-2 all-time in Knoxville, 8-2 at Notre Dame and 4-1 at neutral sites vs. the Irish. The teams have never played an overtime game.

Holly Warlick is seeking her first win vs. Notre Dame as head coach in her fourth attempt.

The 28-point margin of defeat at the hands of the Irish in 2012 was the second-worst in Tennessee history, and the 44 points in a game were a program low until UT scored 43 vs. Virginia Tech on December 6th this season.

The series had alternated away and home games since its inception, but five of the last 14 matchups have come at neutral sites.

After playing in Knoxville two years in a row, Tennessee is reciprocating by making back-to-back visits to Notre Dame.

The series returns to Thompson-Boling Arena next season.

About the Notre Dame Fighting Irish 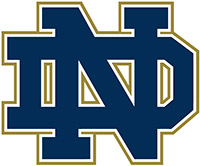 Despite key losses from last season, Notre Dame continues to roll and enters Monday night’s contest with 16-1 record, with its only loss coming at the hands of #1/1 UConn (91-81 on December 5th). Notre Dame and Tennessee share one common opponent, with the Irish beating Oregon State (currently ranked #12/10) at home (62-61) and UT beating the Beavers (53-50) in Corvallis, OR.

The Irish feature a roster of stellar shooters, combining for 49.5% from the field and 44.9% on three-pointers. Notre Dame has a 1.3 assist-to-turnover ratio, tallying 314 helpers compared to 250 miscues. The Irish have allowed five teams to score 72 or more points, compared to UT allowing only one.

ND is the defending regular season and tourney champion of the ACC.

Tennessee will need to bounce back quickly after Thursday night’s 64-59 loss at Arkansas. The setback, UT’s second already in conference play, drops the Lady Vols two games behind league leader South Carolina. UT had won four of its last five games before stumbling in Fayetteville.

Holly Warlick has been starting three sophomores, a junior and a senior in the past four games.

Tennessee is led in scoring by redshirt sophomore guard Diamond DeShields, who is averaging 15.3 points per game. Redshirt sophomore center Mercedes Russell and senior forward Bashaara Graves also hit for 10 or more points per game at 11.1 and 10.8, respectively. Russell (8.7) and Graves (8.6) are Tennessee’s top rebounders, followed by DeShields at 5.5.

Defensively, Tennessee is allowing only 57.6 points per contest, which would rank as the fifth-best effort in school history. Offensively, however, the Lady Vols are putting up only 66.7 points per game, which would replace 69.3 (1983-84) as the lowest in UT annals.

Tennessee will try to avoid back-to-back losses for the first time since dropping games at Chattanooga (November 26th, 2014) and Texas (November 30th, 2014).

After facing Notre Dame, Tennessee will return home to host Vanderbilt on Thursday (SEC Network, 7:00pm) on January 21st for UT’s home “We Back Pat” game.

UT embarks on a three-game week and will meet three top-10 ranked opponents (#3/3 Notre Dame, #9/9 Kentucky and #7/6 Mississippi State) in its next four games. Unranked Vanderbilt comes between the Irish and Wildcats.

Mercedes Russell has double-doubles in her last two games and has shot 50% or better in 14 of 16 games this season. Tennessee has blocked at least five shots per game over the past six contests.

Bashaara Graves is 12-of-13 and Diamond DeShields is 13-of-16 on their charity tosses over the last four games, helping UT shoot 75% in that span. DeShields was named to the John R. Wooden Award Women’s Midseason Top 20, joining fellow SEC players Tiffany Mitchell and Aja Wilson of South Carolina and Victoria Vivians of Mississippi State.

Turnovers continue to plague the Lady Vols, as UT squandered a season-high 24 possessions with miscues vs. Arkansas. UT has surrendered 21, 19 and 24 turnovers in the last three games, resulting in the Lady Vols losing two of three.

The Lady Vols recorded their highest shooting percentage of the season, hitting 59.6% (34-57) vs. the Auburn on January 10th, but that effort was sandwiched by their lowest percentage (29.3%) vs. Florida on January 7th and another sub-par effort (34.8%) vs. Arkansas.

Six Lady Vols have combined to miss 40 games this season due to injuries, making it a slow process for UT to develop on-court chemistry and continuity this season. Nia Moore has pushed UT’s available player list back up to 11, playing four minutes vs. Auburn and Arkansas and averaging four points per game. Her return marked the most Lady Vols in action since 11 played vs. both Syracuse and Chattanooga on November 20th and November 23rd.