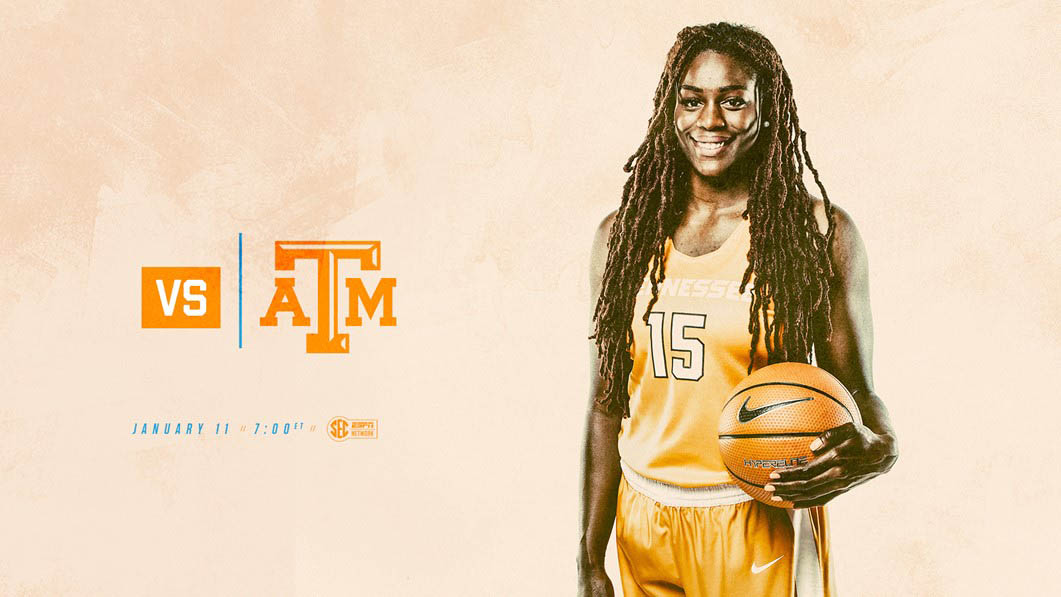 The Lady Vols’ match-up with Texas A&M is the first of four straight UT contests vs. teams ranked in the AP Top 20.  The Lady Vols and Aggies will be meeting for the 11th time overall and third time in College Station during the series.

The Lady Vols will be aiming to go 16-0 for only the fourth occasion in school history and for the first time during the Holly Warlick era.  The last time Tennessee began a season 16-0, the Lady Vols extended the streak to 18 games before finally falling during the 2005-06 season en route to a 31-5 overall record and an Elite Eight finish. 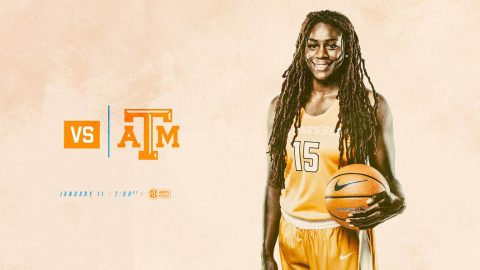 UT has opened SEC play 3-0 for the first time since 2014-15 and for the third time during the Holly Warlick era (also in 2012-13). The Lady Vols used a late 13-4 run in the fourth quarter to stave off upset-minded Vanderbilt, 86-73, on Sunday in Knoxville and remain unbeaten.

Battle of the Bigs

Thursday night’s match-up will pit two of the SEC’s best bigs, UT’s Mercedes Russell and A&M’S Khaalia Hillsman, against one another.

In SEC play, Russell is averaging 19.4 ppg., 7.0 rpg. and 3.3 bpg., while shooting 65 percent from the floor to also rate second among league players.

Hillsman is averaging 19.0 ppg. and 8.3 rpg. and is shooting 69 percent from the field in SEC play to rank first.

Four of the SEC’s top freshmen will be in action at Reed Arena when UT and A&M do battle.

Texas A&M, meanwhile, boasts the league’s second-leading scorer in Chennedy Carter, who averages 20.8 ppg. She also leads the Aggies in assists at 5.1 per contest.

At 15-0, the Lady Vols are in the midst of their longest winning streak since reeling off 25 in a row from December 18th, 2010, to March 28th, 2011. UT is one of only four undefeated teams remaining in NCAA Division I basketball. The other squads are Connecticut, Louisville and Mississippi State.

Tennessee is one of only two SEC schools remaining unbeaten in league play. That club also includes Mississippi State. UT just hosted its best crowd of the season, as 10,023 looked on vs. Vanderbilt.

The Big Orange women have won 13 of 15 games by double-digit margins, including the first three SEC contests. The largest victory margins include 43 vs. Central Arkansas, 53 vs. Alabama State, 62 vs. Troy, and 29 vs. Long Beach State.

UT has led every game this season at the half  except for a tie vs. Auburn (30-30) and has owned a double-digit advantage at the intermission in 10 of 15 contests (Wichita State, Marquette, Texas, Auburn and Vandy are the exceptions).

In Lady Vol history, the most recent long streak for the same starting five reached 11 games in 2007-08, when Pat Summitt chose the same lineup of Candace Parker, Angie Bjorklund, Nicky Anosike, Shannon Bobbitt and Alexis Hornbuckle to report for the opening tip. UT went 10-1 in that span and went on to win the NCAA title with a 34-3 record and the SEC title with a 14-0 mark. In game 12, in the team’s visit to Chicago, Parker missed curfew and didn’t get the starting nod vs. DePaul on January 2nd, 2008.

UT has four players averaging double figures in scoring, including seniors Jaime Nared (17.3) and Mercedes Russell (17.1), and freshmen Rennia Davis (11.0) and Anastasia Hayes (10.9). Evina Westbrook (9.9) is right behind them, knocking on the door.

Nared and Russell have led UT in scoring six times, followed by Hayes (2), and Davis, Meme Jackson and Evina Westbrook (1).

Russell (33 points) and Green (17 points) are coming off career-high games vs. Vanderbilt.

Tennessee has outscored its opponents in the points-in-the-paint category in 12 of 15 games, averaging a 42.9 to 29.3 difference.

Tennessee shot its best field goal percentage of the season (48.6) vs. Vanderbilt, but surrendered its  highest percentage (49.1) as well vs. the ‘Dores.

Kortney Dunbar hit three treys in the 2016 game in College Station, all in the first quarter.

Last Meeting Between UT and A&M

Texas A&M’s Khaalia Hillsman scored the game-winning putback with four seconds left as No. 24/25 Tennessee fell to the Aggies, 61-59, on February 12th, 2017, at Thompson-Boling Arena.

The Lady Vols led by as much as 53-40 early in the fourth quarter, but the Aggies clawed their way back to within 61-59 with 45 seconds left. Anriel Howard hit mid-range jumper after collecting an offensive rebound with five seconds left to send the game into overtime.

Kortney Dunbar provided a major boost for Tennessee in the first quarter, coming off the bench and hitting three 3-pointers. Her nine points in the game were her personal high in SEC play.

Texas A&M enters having won its last two and three of its last five. The Aggies are 9-2 at home this season.

The Aggies gave South Carolina fits in Columbia, falling 61-59 on a late A’ja Wilson bucket for the Gamecocks.

A&M, picked fifth by the coaches and fourth by the media in the preseason polls, returned four starters from last season’s 22-12 squad that finished 9-7 (6th) in the SEC and advanced to the NCAA Second Round.

Legendary coach Gary Blair is in his 15th year at the helm of the Aggies, owning a 344-145 record there. He is 752-308 overall in 33 seasons as a college coach, having led programs at Stephen F. Austin and Arkansas before arriving in College Station.

Blair led the Aggies to the 2011 NCAA title.

Khaalia Hillsman scored a career-high 31 points, as No. 19 Texas A&M gutted out a 82-73 win over Auburn at Auburn Arena on Sunday, snapping the Tigers’ eight-game home winning streak.

Hillsman was 10-of-11 from the field, which ties for third on A&M’s single-game field goal percentage list, behind Hillsman’s own 12-for-12 performance against Hawai’i on December 20th. Hillsman had the first 30+ point of her career, and the Aggies have had at least one player score 30+ points in all four of their true road games. She led the Aggies with 10 rebounds, good for her fourth double-double of the season.

Chennedy Carter added 22 points, marking her eighth 20+ point game of her 17-game career. She has scored at least 22 in all four of her road games, and is averaging 33.5 points per game on the road.

Danni Williams added 16 points, including a 3-pointer with 1:05 left that extended the Aggie lead to 12.

Redshirt senior Mercedes Russell paced No. 7 Tennessee with a career-high 33 points, as the seventh-ranked Lady Volunteers pulled away from Vanderbilt in the fourth period to secure an 86-73 victory Sunday afternoon in Thompson-Boling Arena in front of a season-best crowd of 10,023.

With the win, the Lady Vols improved to 15-0, 3-0 in Southeastern Conference play, and won their 11th consecutive home game dating back to last season. Vanderbilt, meanwhile, fell to 4-13, 0-3 SEC.

Redshirt junior Cheridene Green also had a career day for the Big Orange, pouring in 17 points and grabbing five rebounds. Senior Jaime Nared chipped in 15 points, five rebounds and six steals, as the Lady Vols remained unbeaten through their first 15 games for the fourth time in school history.

Vanderbilt was led in scoring by Cierra Walker, who went 6-of-8 from behind the three-point arc and finished the day with 20 points and six assists. Christa Reed (16), Chelsie Hall (15) and Erin Whalen (10) also scored in double figures for the Commodores, who dropped their third straight game and seventh in their last eight.

Russell proved to be too long, too strong and too determined to be contained, connecting on 14-of-20 shots from the field and five-of-six from the charity stripe to surpass her previous career best of 26, which she notched vs. Auburn on January 19th, 2017.

Green, meanwhile, exploded in the second half to finish 7-of-8 from the field. She had eight points in the fourth quarter alone. Behind the inside play of Russell and Green, the Lady Vols controlled the paint all day, possessing 42-28 and 56-26 advantages in rebounds and points in the paint, respectively. UT also worked on the offensive glass, pulling down 17 caroms that led to a 23-6 advantage in second-chance points.